These 10 Iconic Designs Show How Creativity Will Save the World

From “PussyHats” to the Refugee Flag, 2017 has shown that images and objects have serious horsepower in activism and protest across the world.

Now, the Design Museum in London has released a 60-strong list of nominations for this year’s Beazley Design Awards and, in its 10th year, it’s proving to be more politically charged than ever.

In an age of unrest and resistance, designers have been looking to the news for inspiration, producing innovative products to help make the world a better place.

READ MORE: 9 Innovations That Show Clean Energy Can Look Good and Save the Environment, Too

“There’s a lot of very tough stuff in there. It feels like there’s a particular weight on this year’s exhibition,” Glenn Adamson, curator of the Design Museum’s award nominee exhibition, told CNN.

“But it’s great to show how design can make a difference.”

Global Citizen campaigns to achieve the Global Goals, including Global Goal No.9 for Industry, Innovation and Infrastructure. You can take action here.

Here are 10 of the nominees from across the design categories — products, transport, graphics, fashion, digital, and architecture — that sum up the best and the worst of 2017 so far.

From an innocent knitting pattern to a global phenomenon, the PussyHat hit off in a big way. Designers Krista Suh and Jayna Zweiman posted their knitting pattern for a hat with cat ears, following President Trump’s remarks about grabbing women "by the pussy."

By the day after the president’s inauguration, women across the world were sporting one, and it quickly became “a symbol of support and solidarity for women’s rights and political resistance,” according to the Design Museum.

We are thrilled to be nominated for the @DesignMuseum Beazley Designs of the Year #designsoftheyear#Ecoalf#BecausethereisnoplanetBpic.twitter.com/D4Q34qvPf2

The Upcycling the Oceans project, by Ecoalf, aims to remove the marine waste from the bottom of the Mediterranean Sea, and use it to create a new 100% recycled material.

Recycling rubbish from the oceans is proving to be a popular theme of this year, with Adidas also jumping on the bandwagon to create an “ocean shoe,” among other items.

Another great product on the list making use of environmental problem is AIR-INK, by Graviky Labs — the first commercially available ink made from air pollution.

This museum in Washington D.C., by Adjaye Associates, is the culmination of a decades-long struggle to recognise the importance of the black community in the social fabric of American life.

Inaugurated by President Obama in September 2016, it houses galleries and theatre space, and resonates deeply with America’s “longstanding African heritage.”

READ MORE: How This 4-Ingredient Protein Could End Global Hunger Once and For All

Congrats to our authors @IC4DESIGN_INC@IC4DESIGN_HK for their #DesignsoftheYear nomination for the @UN_Women 'finding her' campaign! pic.twitter.com/piBcikfOcD

This poster campaign, by Japanese agency IC4 Design, was used by the UN to highlight the lack of women in the workplace in Egypt — where just 23% of the workforce is female. It focusses particularly on male-dominated industries: politics, science, and technology.

The “Where’s Wally” style poster challenges its viewers to find a woman, with a caption: “Finding women in technology shouldn’t be this hard.”

While we’re on the subject, Emojis of professional women, has also been nominated for an award. Bearing in mind women under 30 are the most frequent users of emojis, it’s about time we saw the arrival of the cartoon female doctors, teachers and builders.

Seeing Wolfgang Tillmans has been nominated for a 2017 Beasley Design of the Year award for his Brexit work just makes me sad all over again pic.twitter.com/zf9PErdpzb

Well, it wouldn’t be 2017 without some mention of Brexit, would it? Wolfgang Tillmans’ series of posters, T-shirt designs, and campaign images urged Britons to vote to remain in the EU. The designs were distributed by Tillmans, but were also available to download for free on his website.

It targeted young voters in particular, with slogans such as “Say you’re in if you’re in.”

Featuring a thin, black stripe across an orange background, the flag for the first-ever Olympic Refugee Team was, heartbreakingly, inspired by a lifejacket.

The flag’s Syrian designer, Yara Said, was herself displaced and had to come to Europe on a boat — a journey that killed 3,500 people last year alone.

READ MORE: India’s New Roads Are Made With Recycled Plastic 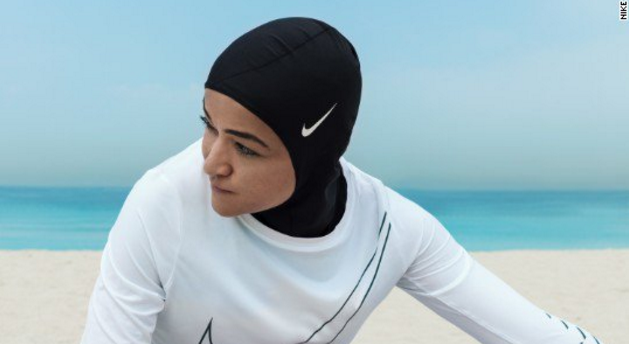 The Nike Pro Hijab, which is set for release in spring 2018, will finally give Muslim female athletes the chance to pursue their ambitions with compromising their religious beliefs.

According to Nike, the impetus of the sporting hijab can be traced “to an ongoing cultural shift that has seen more women than ever embracing sport.”

8. Saydnaya: Inside a Syrian Torture Prison

#Saydnaya is nominated in the @DesignMuseum's 'design of the year' - getting UN monitors into Assad's death camp will be the big win pic.twitter.com/yyWPCeNkYs

A harrowing interactive 3D installation, this recreates Saydnaya, a Syrian torture prison near Damascus. It was created, by Forensic Architecture and Amnesty International, through the memories and descriptions of people who survived the prison, as part of a campaign to allow independent monitoring of detention centres.

The overall winner of the Beazley Design Award for 2016, was Ikea’s flat-pack refugee shelter. And this year the push to create innovations that will save the lives of, or relieve conditions for, refugees struggling to reach Europe is just as strong.

Along the same lines, Refugee Text is also nominated. It’s an SMS service that provides refugees with practical information and live updates on policy changes.

Get hands on experience in #Protest#Art at the Protest Banner Lending Library, courtesy of the @ChiCulturCenter. https://t.co/VhB8nqwZ2cpic.twitter.com/Mk4eJ2YZKD

Artist Aram Han Sifuentes began making protest banners for social justice in her Chicago apartment, following the 2016 presidential elections. Now, she has created a space to teach people how to make their own banners.

“Banners are a way for me to resist what is happening in the United States and in the world. It is a way to put my voice out there and not stay silent,” said Sifuentes.

Nominations for the Beazley Designs of the Year will be on display at the Design Museum in London from October 18. A winner will be selected in each category and the overall winner will be announced on January 25 2018.