“This is my America: people letting people be people.” 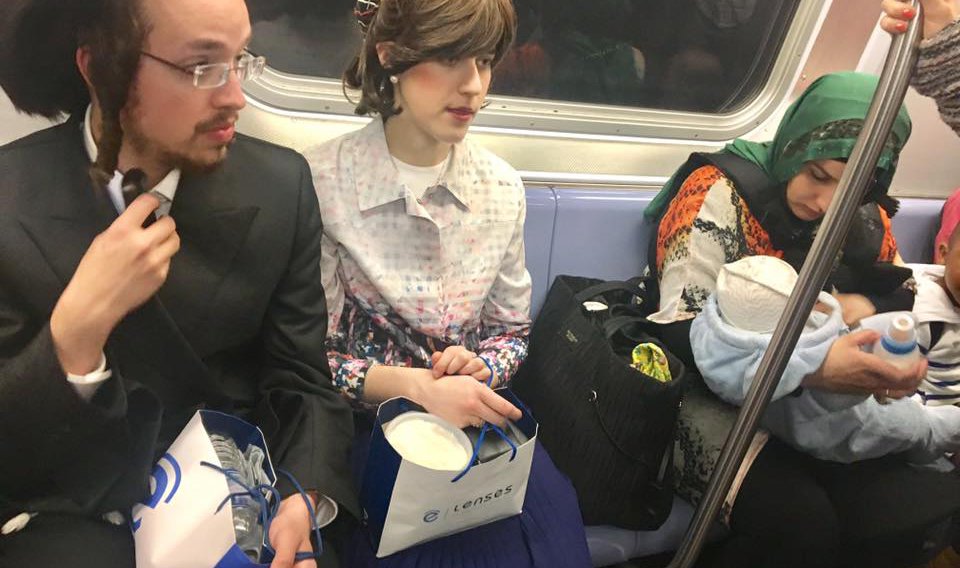 Giving up one’s seat on a bus or subway is a common social norm, even in a bustling city like New York. Though the act itself is simple (often non-verbal), the symbolism of putting someone else’s well-being ahead of your own, even for just a few stops, can be momentous – which is exactly what happened on Easter Sunday last week.

Take Action: Support a World That’s Open, Equal, and Fair for All People

Writer and native New Yorker Jackie Summers documented the event on Facebook and Twitter in what have become viral posts. The image shows a Jewish couple sitting next to a Muslim mother with her child.

A Taoist (me) gives up his seat to a Hasidic couple, who scoot over so a Muslim woman can nurse her baby on Easter Sunday. #Americapic.twitter.com/1HbzE8sVgi

“A Taoist (me) gives up his seat to a Hasidic couple,” he wrote. “Who scoot over so a Muslim mother could sit and nurse her baby, on Easter Sunday."

Read More: New Yorkers Come Together to Clean Up Hateful Graffiti on Subway

The amount of tolerance in the image is overwhelming. First, the domino effect of decency is astounding, particularly the consideration for a breastfeeding mother, which many consider taboo.

What’s more, the religious diversity proves that differences in dress and beliefs don’t need to be cause for proxy wars. People don’t need to actively antagonize each other just because of the labels that are associated with religious identities. Rather, everyone can help each other in spite of those differences.

Read More: Canadians Give Flowers to Muslim Women in Subway to Counter Hate

The most powerful aspect could be how the entire event occurred so matter-of-factly.

“The moment is extraordinary in its ordinariness: common courtesy as an afterthought is the NYC and the America I was raised to believe in,” Summers told the Huffington Post in an email. “Given the age of divisiveness we live in, it seems people are looking at this photo as a reason to put issues like race, religion, and sex aside to focus on more important issues relevant to peaceful coexistence.”

Summers took the photo on an F train. Since its posting on April 16, the photo has received more than 95K reactions and more than 71K shares on Facebook, and has been re-tweeted more than 5K times.

Taoism, also known as Daoism, is an ancient religion originating in China which believes all things in the universe are connected. While the photo doesn’t prove the existence of spirits or deities, it does show diversity at its best.

There is one universal truth: we all have to make the morning commute.