It’s an issue we can’t ignore. 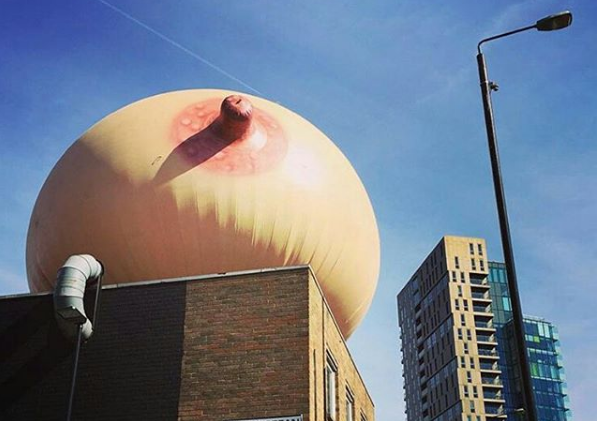 A giant inflatable breast popped up in one of London’s busiest corners to illustrate an issue that too many would rather keep out of sight and out of mind.

On Mother’s Day, the coincidentally-named creative agency Mother London decided to place breastfeeding at the forefront of Londoners’ minds. In a statement on their website, the agency said:

“It’s hard to believe that in 2017 UK mothers still feel watched and judged when feeding in public, by bottle or breast.

“This was our Mother’s Day project. A celebration of every woman’s right to decide how and where they feed their children without feeling guilty or embarrassed about their parenting choices. #FreeTheFeed."

The enormous breast certainly drew attention from passersby, pointing to the enormous stigma around breastfeeding in public.

Can we all just be kind and compassionate to other parents?! Stop the judgement. Breastfeeding is about feeding a child and it’s not anyone’s business how someone else does it! “That something as natural as feeding children (via breast or otherwise) is a stress point for women in 2017 seems absurd. Why should anyone care about how a human woman is feeding her child? But societal pressures are very real, and it’s hard to ignore dirty looks or snide comments.” SAY IT AGAIN FOR THE PEOPLE IN THE BACK 👏🏽 #FreeTheFeed

A post shared by healthy.BEing Wellness (@healthybeingwellness) on Apr 1, 2017 at 8:37am PDT

It's an eye-catching stunt that brings attention to a serious problem. Around the world, women are still victimised for feeding their children in public. In September 2016, the New York Times reported that police threatened to arrest a woman in Georgia for breastfeeding her child in a supermarket, although public breastfeeding is not illegal in the state.

More recently, a Facebook post complaining about a woman breastfeeding her child in a pub sparked controversy in the UK, resurrecting the ongoing debate.

In this powerful video, poet Hollie McNish explores the double standards of a society that is happy to see a woman’s breasts being used to sell products, but not to feed a child.

Yet, there are signs of progress. According to Yahoo News, in January Pope Francis encouraged women attending a ceremony at the Sistine Chapel to breastfeed their children during the long service.

"The ceremony is a little long, someone's crying because he's hungry. That's the way it is," he said. "You mothers, go ahead and breastfeed, without fear. Just like the Virgin Mary nursed Jesus."

A 2016 report recommended that the UK allow breastfeeding in Parliament in a move towards greater gender equality.

Norway is currently leading the way in world standards for breastfeeding, making it easy for women to do so if they choose. When women return to work after their maternity leave, they are entitled to nursing breaks throughout the work day for as long as they are breastfeeding their child. These mother-friendly policies are having an impact. According to PRI, 99% of babies in Norway are at least partially breastfed.

Although it is not possible in all cases, the World Health Organisation advises that infants should be exclusively breastfed for the first six months of their lives. In its recommendation on infant feeding, it states: “Breastfeeding is an unequalled way of providing ideal food for the healthy growth and development of infants.”

Yet a persistent stigma around public breastfeeding still prevents many mothers from freely feeding their children. A giant breast parked on a London rooftop may not blend into the background, but it’s a powerful statement on the need to normalise breastfeeding — a reminder that a woman’s right to choose how, and where to feed her child for a healthy future, cannot be over-inflated.