Strangers Come Together to Clean Up Hateful Graffiti on Subway

Fighting for social justice, one bottle of hand sanitizer at a time. 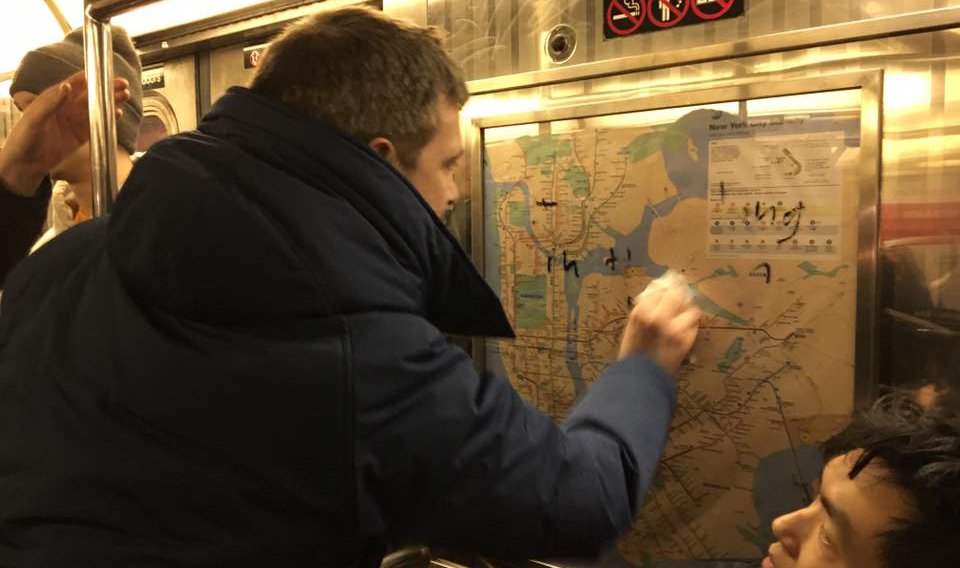 The public outcry from the demolition of graffiti mecca, 5 Pointz, in Long Island City testifies to New York City’s love affair with street art. The medium, sadly, is not always used for artistic expression as an empowered voice of the people, but rather as a mouthpiece for hate.

Fortunately, a message of hate didn’t last long on Saturday when subway riders on a No. 1 train found anti-Semitic graffiti on the windows and posters.

After agreeing with the woman next him that something needed to be done, Jared Nied simply asked, “Does anyone have hand sanitizer?” With that, train riders put on a demonstration in collective action.

Nied told the New York Times: “It was a very New York moment in that we all came together, we all teamed up, and then we settled back down. I don’t think any of those people really spoke, truth be told. Everyone just kind of did their jobs of being decent human beings.”

“I’ve never seen so many people simultaneously reach into their bags and pockets looking for tissues and Purel,” wrote Gregory Locke, who documented the event in a Facebook post. “Within about two minutes, all the Nazi symbolism was gone.”

No one alerted police or Metropolitan Transportation Authority personnel. As a result, there is no official report. Nevertheless, the story blew up on social media. As of Monday morning, Locke’s post had more than 675,000 reactions and more than 440,000 shares on Facebook.

I love NYC. Subway car with Swastika graffiti everywhere, so the passengers pass around Purell & tissues and remove it! #TurnHateIntoLove✊ pic.twitter.com/gD0P96X8yS

There has been a recent spike in hate-crimes and racist graffiti surfacing nationwide. The Southern Poverty Law Center reported that of the 867 cases of hateful harassment or intimidation recorded in the two weeks after Election Day, 100 of them were anti-Semitic. Of those 100 incidents, 80 involved graffiti depicting swastikas and specifically referenced Jews. Other targeted demographics include immigrants, Blacks, Muslims, women, and the LGBT community.

There have been widespread efforts to combat these attacks. While the No. 1 train riders chose to clean up the graffiti, others have made hopeful or humorous additions in order to spin its message.

This is what New Yorkers do - we turn hate into love.  And we wont back down -not now, not ever. #TurnHateIntoLovepic.twitter.com/yVEsTY2aGc

Regardless of the method, people are coming together to eliminate hateful messages wherever they spring up. Love, creativity – and, evidently, hand sanitizer – truly do trump hate.