On the eve of her murderer’s trial, Cox is awarded Rising Global Peace Prize with the Syrian White H 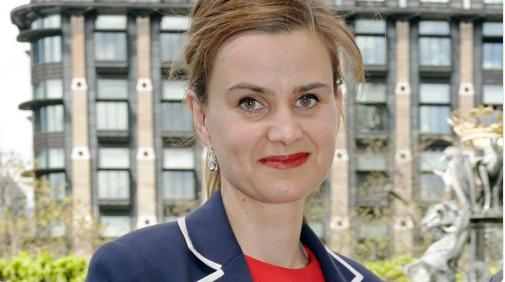 In the week leading up to the EU referendum vote, nobody could agree on anything. The white noise from both sides of the debate was deafening. David Cameron prophesied World War Three, whilst politicians staged fictional armadas on the River Thames. Everywhere the truth was distorted beyond legible recognition, everywhere there was division and deceit. Anger boiled over, and burnt us all.

Jo Cox was killed by a white nationalist who allegedly hated her pro-refugee views. On the day she died, the divisions across the country briefly dissipated. The tragedy held a mirror up to our shortcomings as a nation of people; for a fleeting moment, we saw ourselves, and how degraded the debate had become. It didn’t take long for the arguments to return, but over the course of that terrible day, a part of us all had been changed forever.

Tribute to MP Jo Cox by @STVNews cartoonist @NeilSlorance: 'We have far more in common than that which divides us' pic.twitter.com/ySyeOR3jre

Jo Cox was the best of us. Now, more than ever, the world needs more of her ilk. Thomas Mair is going to trial for her murder this week, but that accused act may have erupted from hateful ideas and poisonous rhetoric that has no place in public or private discourse. Just as she did, we must look at the world around us, and ask the question: is this the best we can do?

Everything Jo Cox stood for must hold strong. Compassion without limits, action without compromise, battling for a better world. Brendan Cox, her husband, has made it his mission to carry forward her legacy. “In one of the last speeches that Jo gave she said that all that was required for evil to triumph was for good men and women to do nothing,” Cox said. “That is even more true today.”

This week @RISINGforum we will award #RISING16 Global Peace Prize to The White Helmets and Jo Cox. Here's why... https://t.co/ud2Hxr33f9pic.twitter.com/AAsRzZRcPL

Jo Cox will be honoured with the Rising Global Peace Prize award at this week’s Rising Global Peace Forum. She will share the accolade with the Syrian White Helmets, a group she nominated for the Nobel Peace Prize before her death. The annual conference, in Coventry, brings together global leaders and advocates for peace. Ciarán Norris, director of the conference, aims to put a “spotlight on the catastrophic consequences of conflict and the power of peace”. Speakers include former child soldier Michel Chikwanine, and Ziauddin Yousafzai, father of the inspirational Malala Yousafzai.

“Jo was inspired by the White Helmets because they personified some of the best about humankind in some of the worst circumstances,” continued Brendan Cox, “these are the people who run towards danger when others run away. They’ve saved over 70,000 lives and helped many more and, for Jo, they were a symbol of how, even in the depth of inhumanity, humanity can still respond and individuals can still find that compassion, that commitment and that service in their hearts.”

It’s been several months since the frustration of the referendum took a black twist, and it’s vital that we think deeply about how such a crime could have taken place. The legacy Jo leaves behind, admirably recognised by the Rising Global Peace Prize, is rooted in hope. The next generation of activists, empaths, and leaders will have felt provoked by the unfairness of her passing. The future will be alight with that burning injustice, and can spark real, tangible change. While she can no longer lead, she can still inspire.

Despite the increase in hate crime that followed the referendum result, her legacy has flourished. The UK has finally begun to accept child refugees from the Calais ‘jungle’ camp. Many campaign groups, including Hope Not Hate, have taken on board Cox’s ‘more in common’ mantra, to help spread unity in the face of societal ruptures. Indeed, Hope Not Hate has raised over £1.8 million in her name. Her husband, Brendan, continues to fight on in her honour.

The lessons we can learn from the life of Jo Cox are numerous and powerful. But we only have to look as far as her first speech in Parliament, so appropriately repeated, to understand the most important of them all. “We have more in common with each other than things that divide us”, Cox said. From Brexit to the US election, politics has recently forced a harsh wedge between us all. In the absence of a ballot box, perhaps it’s time we choose humanity instead.