Beach season may have ended, but the debate over Muslim swimwear, and Muslims in France, isn't over. 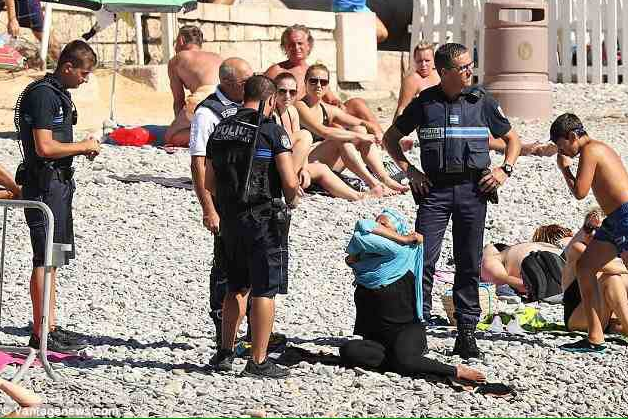 France is worried about a swimsuit. Very worried.

The political debate that engulfed France for weeks this summer over whether Muslim women should be allowed to wear a burqa-like swimsuit known as a “burkini” on public beaches has receded from public conversation, but it appears to be far from over.

French politicians vying for the presidency in early 2017 have said they will keep the emotionally-charged debate over the burkini alive and well until elections, and mayors of towns that instituted the ban have doubled-down, saying they will continue to impose it, ensuring that it will land back in the headlines — and likely in French courts — in coming months.

Read More: The Burkini Ban Battle Isn’t Over Yet

So why is France so upset about the burkini? Why has this long-sleeved swimsuit come to symbolize a cultural and political identity crises that has thrown 220 years of history into question? And what do Global Citizens need to understand about the debate?

Here’s an explainer we put together that delves into how the burkini became a symbol of the fight for France’s future.

What Is The Burkini?

The burkini is a full body swimsuit that allows Muslim women to swim while still wearing a burqa-like garment. It was invented by a Lebanese Australian designer, Aheda Zanetti.

French towns along the Riviera began to ban the clothing this summer, using a variety of explanations, from the garment’s allegedly overt religious affiliation, to its link to an extremist religion that has perpetuated terror attacks on the country, to the claim that the garment actually oppresses the women who choose to wear it.

The bans were ruled unconstitutional on the grounds they violated freedom of religion and freedom of expression by a high court, but many of the towns have said they will continue to fight to keep the bans on other grounds.

Is The Burkini Ban Legal?

As quickly as the mayors of French beach towns instituted bans, civil rights groups fought the bans in court, raising the issue of whether French law allowed the government to dictate clothing.

Two different French courts found two different answers to that question, and the conflict between them highlights a fundamental disagreement over how the French view freedom of religion, freedom of expression, and equality.

First, the high court said the ban "seriously and clearly illegally breached fundamental freedoms.” Then a lower court later found that since "the emotion has not yet declined" over a brawl on a beach on Aug. 13 over the presence of a woman wearing a burkini on the beach, the garment could "create clear risks of disrupting public order" and so the ban was justified on security grounds. In France, the court seemed to suggest, freedom of expression does not automatically trump the need for public order.

Read More:  These Iranian Men Are Wearing Hijabs To Fight For Gender Equality

Well, What Does French Law Say?

As Corsica tries to keep its ban to maintain public order, it will rely on a legal framework that underpins French society: laïcité, or secularism. The idea of keeping public spaces secular to ensure that all citizens look equal and are treated equally by the government dates back to the French Revolution when the state wanted to limit the Catholic church’s influence, according to experts.

“The idea is that everyone is equal, all citizens are the same in their public roles — this is what makes the French nation cohere, it makes it cohesive. It doesn’t advertise differences, it advertises similarities,” said Ed Berenson, director of the Institute of French Studies at New York University.

A law passed in 1905 banned religious influence in public spaces, and was intended to keep Catholic symbolism such as veils and crucifixes from influencing the country, he said.

Secularism continued to have widespread support through the early 2000s. When France banned the Muslim veil from being worn in public schools in 2003, it was widely accepted. But when the question of Muslim-specific garments made its way from the school to the beach, the idea became more controversial.

The public did not react well to seeing the government tell a woman what she could or could not wear, Berenson said. And suddenly, the French idea of secularism seemed at odds with its ideals of liberty and freedom.

What About Freedom of Religion? Or Freedom to Dress However One Chooses?

The conflicting decisions pit one French value, secularism, against another, liberty. And only one of those values is enshrined in French law, suggests Berenson.

“Constitutionally, France doesn’t have the freedom of religion and freedom of expression that we do [in America], and there isn’t a long history of jurisprudence which established the right to public expression, whether free speech or religious expression,” said Berenson.

French people don’t have an ultimate right to freedom of expression as exists in the United States, he explained. The country has much stricter limits, for instance, on freedom of speech; it is a crime to publicly deny the Holocaust happened, for example.

The French motto of liberté, égalité, fraternité (“liberty, equality, fraternity”) is, it turns out, rather at odds with its culture and legal framework of laïcité (secularism), which regulates how “liberte” can be expressed.

What About French Politics?

As the burkini bans of the summer ignited controversy, politicians from both the left and the right were quick to announce support of the bans.

Many of the candidates running for the French presidency in 2017 have spoken out against burkinis and in support of secularism, including current Socialist President Francois Hollande, Prime Minister Manuel Valls, who said the bans were necessary to maintain order, former President Nicolas Sarkozy, who is once again vying for office and called for a nationwide burkini band, and far-right candidate Marine Le Pen.

The issue is expect to play a major role in the upcoming election.

“The elections in France are just a few months away,” Berenson said. “This is going to be a major problem and extremely exploited by Marine Le Pen and the former President [Sarkozy]. It's going to give them great ammunition however they play it. They can play it any way they want to, but play it they will.”

Should  the Government Be Allowed to Tell Women What to Wear?

Much of the global response to the burkini controversy focused on the issue of the government telling women what to wear or what to do with their bodies, a seemingly straightforward feminist issue. A photo of French police surrounding a woman wearing a burkini and telling her to remove it shocked internet users.

Read More: This Journalist Was Criticised For Wearing A Hijab While Covering Nice. Here's Her Perfect Response

But some experts of French culture say the issue was not that clear-cut.

One of the mayors who banned the burkini, Marc-Etienne Lansade, said that burkinis were “humiliating for the women that are wearing them,” while Prime Minister Valls said they were “a symbol of the enslavement of women.”

“It’s hard for outsiders to understand the genuineness of what they’re doing, that they have an earnest and genuine belief that these women would be better off in a bikini, a Western bikini,” said Kathryn Kleppinger, a professor of French studies at George Washington University. “There is in an honest belief in some quarters that this will help.”

“It’’s a much deeper and more serious philosophical situation than a mere superficial thing,” said Berenson.

Feminists in France are divided, too.

“Some say the state shouldn’t have any right to tell women what to do with their bodies and there are others who say covering up is a patriarchal imposition on women, and patriarchy, wherever it comes from — Muslim clerics, fathers or brothers — shouldn’t be allowed. So you have really opposite understandings,” Berenson said.

So What Will Happen Next?

The decision by Corsica’s mayor to keep the ban in place could lead to another court challenge, and France’s legal system could be forced once again to grapple with which laws and values it wants to uphold. Meanwhile, the French presidential election will be held in April and May of 2017, right before the weather warms and right before, of course, burkini season.