The Burkini Ban Battle Isn’t Over Yet 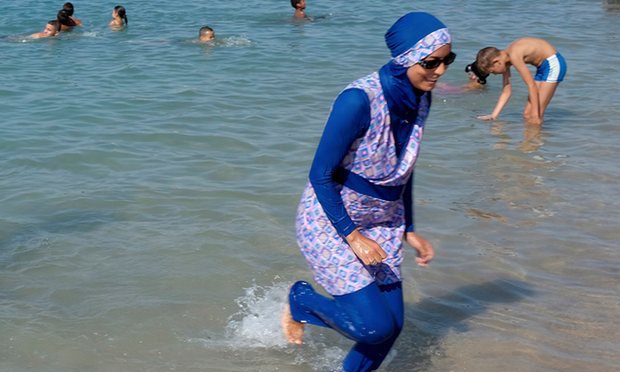 Just last week a French high court judge overturned one town’s burkini ban on the grounds that the ban violates the freedoms of movement and religion. The judge also contended that authorities could not adequately show that burkinis disrupted public order. The court’s decision was also effectively a warning to other municipalities with similar restrictions that their bans would likely be overturned in court too. People and the media outlets around the world rejoiced, but it seems now that their celebrations were premature.

In rejecting the #BurkiniBan, France took an important step back to rights-respecting sanity https://t.co/orZvtxqphypic.twitter.com/FVDK3Bwduy

Shortly after the overturning of the ban was announced, former French president Nicolas Sarkozy called for a nationwide ban on burkinis. Of the 30 or so towns that have policies allowing police to stop women in full-body swimwear on the beach, the mayors of over 20 of those towns are still refusing to lift their bans. In defending the ban, the mayor Lansade of Cogolin went so far as to say, "if you don't want to live the way we do, don't come." He added that burkinis are “humiliating for the women that are wearing them,” though it is likely far more humiliating for women to be forced by police officers to remove clothing. Lansade’s statement echoes the sentiments of the French Prime Minister who previously called the garment a “symbol of the enslavement of women.”

#BurkiniBan does not increase public safety, but does a lot to promote public humiliation #WearWhatYouWantpic.twitter.com/KGy93Grri6

Unfortunately, this reflects a fundamental misunderstanding of the burkini and its associations. While these policy-makers believe they are liberating women from the oppression of the burkini, it is actually the burkini that many women feel is doing the liberating. “The burkini allows me the freedom to swim and go on the beach … no-one has ever told me to wear it - it's my own choice,” one woman told the BBC.

Forcing Muslim women to take off their clothes because you want to liberate them... by forcing them....to be naked. Oh France.

The ruling on the ban is an important step toward restoring civil liberties to these women, but it doesn’t address the underlying mindset that gave rise to the burkini ban in the first place. The ban’s champions claim its aim is to reinforce the country’s secularism and diminish threats to public order; however, many consider it an islamophobic, discriminatory reaction to the recent acts of terrorism.

Mayor Lisnard of Cannes called burkinis “the uniform of extremist Islam.” “If a woman goes swimming in a burkini, that could draw a crowd and disrupt public order … it is precisely to protect these women that I [decided to ban burkinis,]” he explained in an interview. However, the kind of public disruption Lisnard describe does not arise from clothing choices, but rather from misguided, islamophobic public opinion.

Rather than quelling these kinds of disruptions, the burkini ban is more likely to deepen social divides and intensify xenophobic sentiments. The former director of US National Counterterrorism Center believes that the burkini ban, aimed at reducing the risk of terrorism, could actually increase the likelihood of terrorism in France. “Banning the burkini doesn’t produce terrorists. But it does make the people who are already alienated … say, ‘Ah, ISIS’s message is true and real.’” he told ABC.

#BurkiniBan : Fear of the burkini  - © Chappatte in The International New York Times @nytopinionpic.twitter.com/qaOQDeK8Pe

Maintaining the ban lends legitimacy to discriminatory public opinions and can embolden Islamophobia, leading to fear of other religiously affiliated clothing and characteristics.

Some visiting French police have just spend 10 minutes shouting at our pub umbrellas.#BurkiniBan#FrenchFarcepic.twitter.com/H5v7ryXwMr

The burkini ban discriminates against women on the bases of their race, religion, and gender, and, as a result, is a violation of people’s basic freedoms. While last week’s court ruling on the ban was a small step toward justice, there is still more work to be done if France intends to stand by its motto “liberté, egalité, fraternité” (meaning “liberty, equality, fraternity”). The real celebration awaits the lifting of the ban throughout France.