This Journalist Was Criticized for Wearing a Hijab While Reporting Nice. Here’s Her Perfect Comeback

Why Fatima Manji and her hijab are not going anywhere. 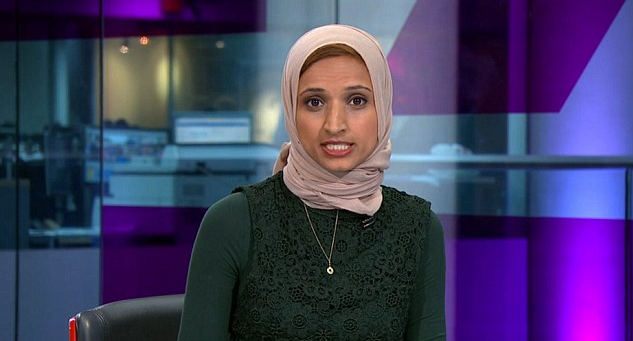 This week Kelvin Mackenzie, a columnist from the UK’s Sun newspaper, wrote a controversial column questioning why a “young woman wearing a hijab”  had been chosen to anchor the news on the attacks in Nice.

Fixating on the fact that the journalist Fatima Manji was visibly Muslim, he asked: “Was it appropriate for her to be on camera when there had been yet another shocking slaughter by a Muslim?”

Mackenzie suggested that choosing Manji to cover the attacks was a deliberately provocative choice, asking if it was done “to stick one in the eye of the ordinary viewer who looks at the hijab as a sign of the slavery of Muslim women by a male-dominated and clearly violent religion?”

Adding insult to injury, he not only suggested that Manji’s religion would taint her journalistic integrity — he proceeded to brandish all Muslim women as slaves, and all Muslims as violent. His words have sparked more than 1,400 complaints so far.

Immediately after the broadcast, Manji tweeted to inform viewers she had always been billed to anchor the Friday night broadcast, which happened to fall the day after the devastating Bastille Day attack.

And to those asking, yes my presenting tonight was long planned - had thought it might be a quiet Friday, instead very tragic

In the aftermath of Mackenzie’s column, Manji published a powerful opinion piece in The Liverpool Echo, challenging the dangerous prejudices his words betrayed.

“I was grief-stricken by the massacre in Nice, particularly by the haunting image of a little girl’s corpse laying next to the doll that was once her companion,” she said.

“Mr MacKenzie seemed to find my appearance on his screen equally horrific: ‘The scenes from Nice shocked audiences around the world, but did the C4 hosts (sic) headress (sic)?’”

She defends her ability to do her job honestly and fairly, whilst highlighting the impact of MacKenzie’s words on perceptions of Muslims in the UK.

“Young men and women of all backgrounds regularly ask me for advice on how to forge a career in journalism. Mr. MacKenzie’s monologue will frighten many of them into believing that they will be on the end of tabloid attacks mainly for daring to do their jobs.”

Words have an impact —  the recent xenophobic backlash in response to the Brexit vote is a clear example or the influence rhetoric has on behaviour. In a letter to the current editor of the Sun, Baroness Sayeeda Warsi, member of the House of Lords and former Cabinet minister, urged him to hold his journalists accountable for “shock jock writing which simply perpetuates stereotypes, demonises and attempts to hold a whole community accountable for the actions of an individual.”

Would MacKenzie ever question whether a white male journalist could appropriately report on a racially-motivated attack by a white gunman? Unlikely. MacKenzie’s column highlights a double-standard that attempts to ‘other’ and marginalise certain minority voices.

Manji’s closing comeback is the perfect challenge to such attitudes — capturing her outrage, optimism and defiance in the face of prejudice:

"The truth is I always pride myself on journalistic integrity regardless of who I’m interviewing or what story I’m covering," she wrote.

Just been interviewed by @fatimamanji for @Channel4News - a real professional. pic.twitter.com/oD30yDDIbQ

"That is my mission at Channel 4 News. I will not be deterred in this mission by the efforts of those who find the presence of Muslims in British cultural life offensive."

“The Truth? I confess, I p*ssed on Kelvin MacKenzie’s apparent ambitions to force anyone who looks a little different off our screens, and I’ll keep doing it.”