Activists Have Perfect (and Hilarious) Responses to France’s Burkini Ban

From hilarious to serious, these responses are on point.

A debate over women’s swimwear has dominated media and the internet this week. An image of French police enforcing a controversial ban on “burkinis” ignited a firestorm of activism, outrage, and satire admonishing the French authorities as sexist, misogynistic, and even racist.

In the wake of a deadly attack by a supporter of the Islamic State in Nice, France, that killed 85 people at a Bastille Day celebration on July 14, the conservative beachwear known as a burkini (or burqini) has been at the center of a national debate over secularism and appropriate women’s clothing.

Debate over conservative Muslim clothing is not new in France. The nation bans public workers from wearing headscarves and face coverings and has a longstanding rule against swimming in public pools while wearing street clothes that was used in 2011 to ban a woman wearing a burkini.

Read More: This Journalist Was Criticized For Wearing A Hijab While Covering Nice. Here's Her Perfect Response

This summer, in the wake of the Bastille Day attacks,  three coastal cities in France banned the conservative female swimwear that includes full body and head coverings from their beaches.

On August 13, a French court in Nice upheld the ban on burkinis. The local court ruled “in the context of the state of emergency and the Nice attack forms of beachwear that indicate belief” were likely to “exacerbate tension” and pose a possible “threat to public order.”

After the ruling upholding the ban, Muslim Imam Izzeddin Elzir posted a photo on Facebook of nuns swimming in their full habits, with the implication being that there was a double standard at play.

The photo went relatively unnoticed until this week when a photo of French police requesting a woman remove her burkini ignited a wave of outrage and activism. 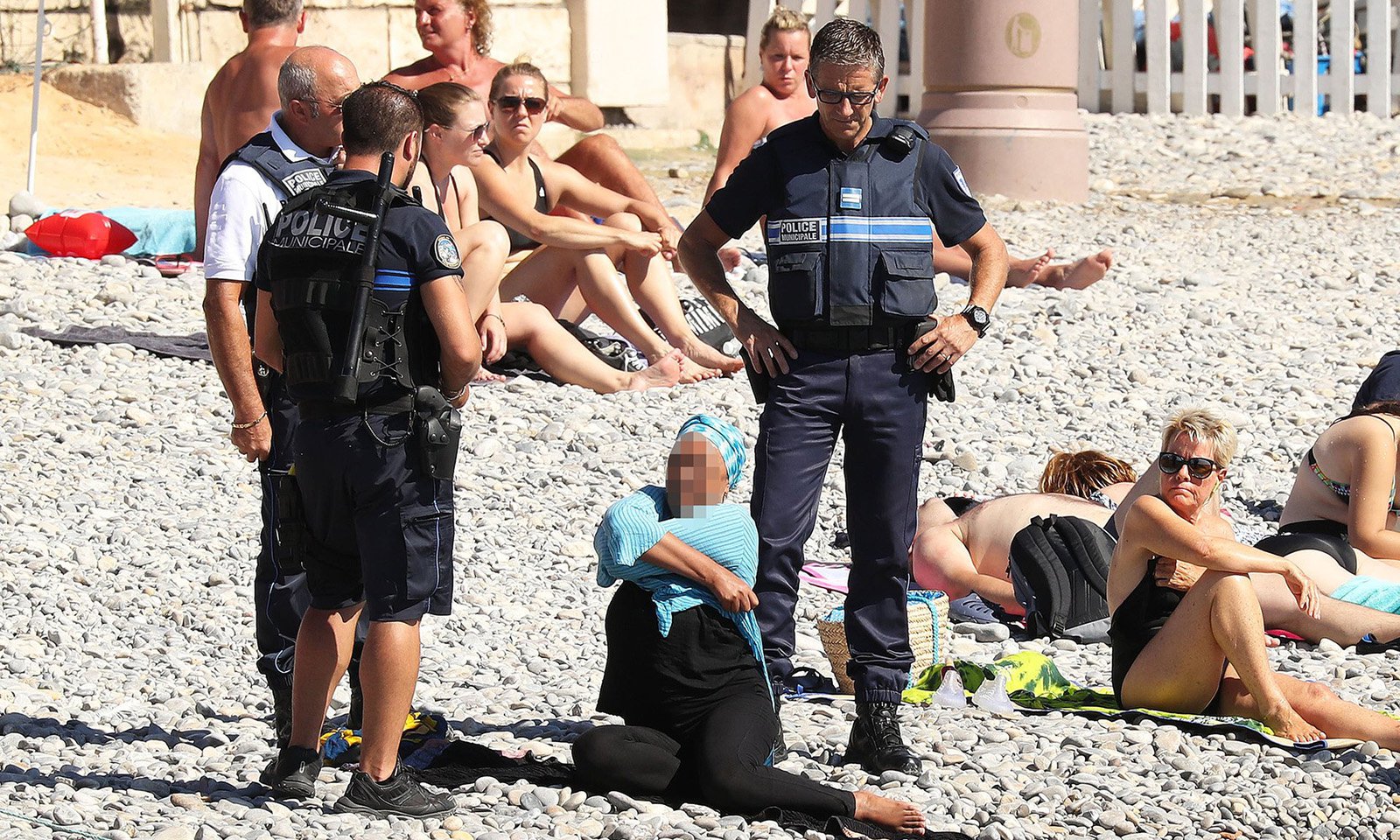 Only 1 of these 3 outfits is illegal on French beaches. The other two are fine. Nope, no racism here. #BurkiniBanpic.twitter.com/cZXuFs7w7Q

94 years later and women are still being policed on what they wear to the beach #BurkiniBanpic.twitter.com/VmcAbVC5kh

#BurkiniBan in a nutshell: "I hate a religion that controls women...so I'm gonna fix that by controlling women." #misogynyisfun

The online reaction included questions about why this culturally driven restriction on women’s clothing is justifiable for a European country but not for other nations around the world.

Wonder how world would react if armed Dubai police forced these women to wear a burka and fined them? #BurkiniBanpic.twitter.com/CA7mZVoxgd

The online activism was full of solidarity for women and calls for true equality, but it also included some predictably cutting humor.

Ok French police, you just try to tell these guys to remove their clothes on nice beach too. #BurkiniBanpic.twitter.com/QT49mEBALm

Instead of banning the #burkini ban fat pasty guys in #Speedo ? pic.twitter.com/hl3I07GqkC

The ban itself is defended by supporters as a needed protection against eroding the France’s secularism. This argument was brilliantly put to shame in a widely circulated cartoon by Belgian editorial cartoonist Steven Degryse, known online as Lectrr. His cartoon replaces the French motto of “Liberté, Égalité, Fraternité,” which means liberty, equality, fraternity, with “Liberté, Égalité, Déshabiller.” Déshabiller means “to undress.”

Today, the online reaction spilled into the real world with activists building a beach in front of the French Embassy in London.

The debate over the burkinis is mostly focusing on the rights of Muslim women, but the outfits have a much more secular history.

The suits soon became a regular sight on Australian beaches, including on lifeguards both Muslim and non-Muslims who wore them for sun protection while on the job.

Read More: The First US Olympian to Wear a Hijab Wins a Bronze

The swimwear soon showed up in North America, parts of Europe, and across the Muslim world. Though not all countries were happy about the full covering outfits. In 2009, the northern Italian town of Varallo Sesia set a fine of 500 euros for anyone wearing a garment made up of a veil, a tunic, and loose leggings at swimming pools or riversides.

This did not stop British celebrity chef Nigella Lawson, who is not Muslim, from donning a burkini in 2011 to protect her skin from the sun while in Australia.

The beautiful @Nigella_Lawson fully clothed at a beach. She's not muslim.

Today, the swimwear debate in France is a global opportunity to define the rights of women to make their own choices.

“Here in France, we have a principle of secularism … but this law concerns only Muslim women,” spokesperson for the Southern Federation of Muslims Feiza Ben Mohammed told English-language French website The Local.

“The mayor talks about protecting public order, which means he thinks the presence of a Muslim woman on a beach will cause trouble,” she said. “Yet again it’s ordinary Muslims who pay for the actions of the terrorists even though they have nothing to do with it. It’s exactly what Daesh [Islamic State] wants.”