‘We Won’t Wait’: How Women Are Banding Together to Sway the Election

Women of color, immigrants, and low-income earners are uniting to fight for political change. 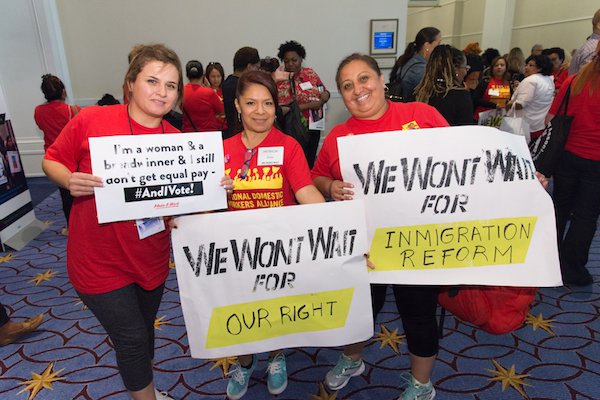 Sitting at a kitchen table in Washington, D.C., one woman told her story: though her doctor had prescribed bed rest for her when she was pregnant, her employer refused to give her time off, and she had to work on her feet all day while wearing a diaper.

Another woman spoke about discrimination and violence she faced for being transgender, while a third said she lost her job for taking a day off to care for her mother with HIV.

They were all part of a gathering of more than 1,200 female voters from across the country that met last month in Washington, D.C., to talk about how the country should move forward. And it took place in a familiar-looking setting: around a kitchen table.

There, women told stories about how public policies have affected their personal lives.

The kitchen table conversations are a key part of the political organizing strategy of We Won’t Wait, a coalition of more than a dozen women-centric political groups uniting women of color, low-income women, immigrant women, and others to advocate for policies that benefit all women.

Read More: Here's What the Electoral Map Would Look Like if Only Women Voted

The groups that attended the summit were as varied as the National Domestic Worker Alliance, Moms Rising, Family Values @ Work, Caring Across Generations, and the Black Women’s Roundtable.

“There’s no hierarchy of issues,” Ellen Bravo, executive director of Family Values @ Work, told Global Citizen. “One of the key things about this is the intersection of issues, how they overlap. If you need to get a mammogram, an abortion, or to have a baby, you need to not get fired for doing that and also have access to health services to get the care you need.”

Bravo said that for years she had been having conversations with other female political activists about how to reach across generations and maximize the visibility and impact of everyone’s work. They wanted to come up with an agenda that spoke to the complexity of women’s lives, rather than reduce their work to a single issue.

Read More: Obama Casts an Early Vote — Here's How You Can, Too!

“These are the voters who are least visible but they are really the drivers of the outcome, and if you want to reach them,” she said, “you have to recognize the complexity of their lives, and not just think of this is as a single issue that will take care of it.

The result was the inaugural We Won’t Wait Summit, held on Sept. 19 and 20. At the conference, a storyteller introduced each issue by recounting her own personal experiences, and then women gathered in breakout sessions around kitchen tables set up on stage to talk about how to advocate for change.

“We want to have intimate conversations where we can with small groups, where we can share and listen to what women are saying, to what their concerns are, and to help craft a public policy agenda or an organizing campaign,” said Melanie Campbell, President & CEO of the group Black Women’s Roundtable and the National Coalition on Black Civic Participation.

Campbell has been working in political organizing for years and pushing for policy change on issues of importance to black women. She saw the benefit of linking her group to a wider movement of women’s organizing.

“The fight for immigration reform and economic justice and criminal justice: there’s an intersectionality there. We need to fight for reproductive justice and saying ‘We Won’t Wait’ makes it clear that we’re going to fight for that. We can’t wait for these to be addressed by officials, not just at the national level but local and state level,” Campbell said.

The partner organizations are all considered equal, Campbell said, and the agenda was created by combining their priorities.

Read More: 5 Voting Moments That Changed the Course of US History

“We didn’t design this to be a monolithic kind of effort. There are basic things we agreed on,” she said. “It’s designed to help every organization’s priorities.”

Participants are asked to sign a pledge vowing to “do more than just show up to vote.”

“I will use my voice and my power to fight for a comprehensive economic agenda that spells real change on all the issues that are important to me and my family,” the pledge reads. “I am more than ‘the women’s vote’ or ‘the black vote’ or ‘the Latino vote.’ And the issues that impact me — from caregiving to immigration reform, from reproductive healthcare to racial justice — matter to millions of people across this country.”

Read More: Voter Registration Deadlines for Every State in the United States

And while the conference only lasted one weekend in Washington, the conversations are now continuing around the country through Election Day and beyond. At kitchen tables around the US, We Won’t Wait participants are trying to convince their neighbors, friends, and relatives to sign the pledge and to vote, and then in turn to convince other women in their lives, Campbell said.

Going forward, We Won’t Wait and its partner organizations will push for women-friendly policies to get on the ballot, lobby candidates to support women’s issues, and hold elected officials accountable on women’s issues once they are in office, Bravo said.

“Our opponents want to trivialize our movement and our lives,” Bravo said. “What these groups do is by showing the consequences of the lack of policies we need, we make real what’s at stake for our nation, and we show the people who are involved in the movement that what we can’t do on our own, we can do together.”