Trudeau: Appointing Women to Cabinet Is Just the Start of Creating Gender Balance

A minister is pregnant in Parliament and it’s helping define new rules in Canadian politics. 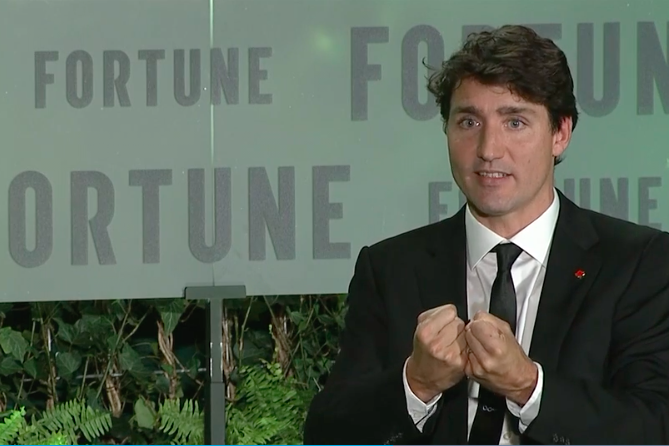 Since taking office in 2015, Prime Minister Justin Trudeau has made his mark with a couple important movements — like appointing a gender-balanced cabinet and implementing a feminist international assistance policy — but on Tuesday, he talked about the challenges the government still faces.

Trudeau famously said that he appointed a gender-balanced Cabinet, “Because it’s 2015,” but it wasn’t a simple task to achieve, according to the prime minister.

Trudeau explained at Fortune’s Most Powerful Women Summit in Washington that it took time before his election in 2015 to convince women to join the political game.

Read More: Melinda Gates and Justin Trudeau Just Had A Conversation About Feminism And It Was Great

Two years into his time in office, Trudeau and his team now face different challenges.

“Now that we have a Cabinet, and a government, and quite frankly, a party with all these great, strong, young women, the challenge we have is, despite all their presence, we’re still very much in an old-fashioned man’s game of politics,” Trudeau said on stage at Fortune’s Most Powerful Women Summit. “And we’re having to look at how we change things in the workplace.”

For instance, Canada’s Minister of Democratic Institutions, Karina Gould, is pregnant — and it’s the first time a Cabinet minister has ever been pregnant in the history of the country's politics.

Read More: 27 Famous Men Who Are Proud to Be Feminists

“She’s going to have a baby in the spring, it’s hugely amazing, but what do we do about maternity leave? [This is] the first minister in Canada and maybe one of the first in Western democracies to be having a kid,” Trudeau said.

Certainly the fact that this has never happened before speaks to the lack of female involvement in past governments, but it more importantly represents a turn in time when it comes to shaping political parties.

There is no precedent to follow when it comes to maternity leave for Cabinet ministers, so Trudeau’s team now has the opportunity to lead the way.

Read More: Sophie Grégoire Trudeau Speaks Out About Gender Inequality: 'We Must Stand Up Together'

“We’re writing this, but we’re writing it together with her, and she gets to help define it, and hopefully we get to show that it’s possible to be a minister and a mom, and everything, according to your own choices,” he said.

Trudeau is in Washington this week and will meet with US President Donald Trump today to discuss the NAFTA agreement, but the summit was the original reason for his visit, according to his office.

Global Citizen campaigns on the United Nations Sustainable Development Goals as they relate to issues like citizenship and gender equality. You can take action here.