If only equality were so simple. 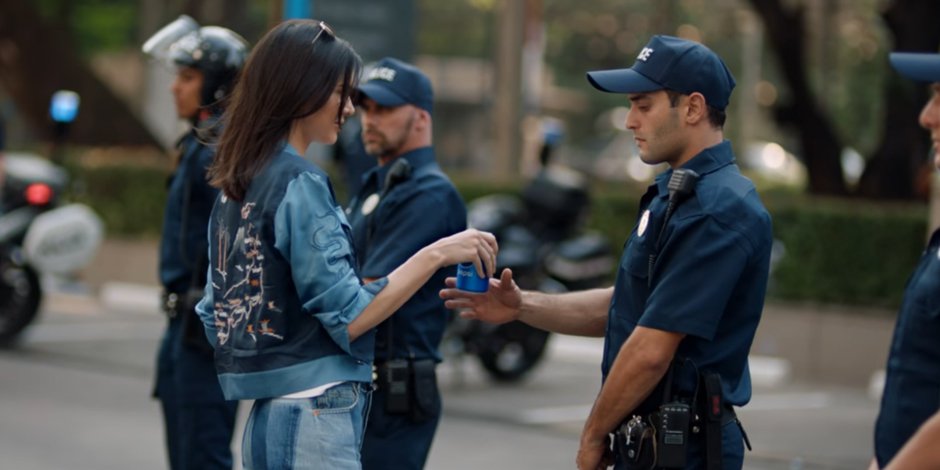 The jury is in. Pepsi released a new advert with Kendall Jenner Tuesday March 5, and the internet delivered a damning verdict. It prompted Pepsi to remove the video from all its offical channels just a day after its big premiere, and to issue an apology to all "who fight for justice".

Missed the hype? Here's what I see.

The video depicts hundreds of activists/models attending a political protest, though it seems more like an outdoor catwalk/corporate pub crawl. Reality is suspended like the opening sequence in La La Land, where a standstill traffic jam inspires a smash hit sing-along, instead of the usual tense strangling of the steering wheel.

Kendall Jenner, nearby, is working a photoshoot, until she makes dramatic, unblinking eye contact with one particularly sultry male activist, a cellist clad in a black beanie hat. The world pauses, as the narrative shifts. This moment is important! It’s the turning point! Jenner is now here to transform Coachella into a revolution, and will undoubtedly save the day! I bet Gandalf didn’t look this good when he saved Helm’s Deep (factcheck: he looked better - he rode a white stallion). Jenner rebelliously wipes off her lipstick, and throws her blonde wig to a waiting black woman. Hey - every Batman needs somebody to look after the cape.

Suddenly, we are presented with impending jeopardy. The camera cuts from the joyous crowds to several stern, square-jawed policemen. Experience tells us this could spell the end of the euphoria. We’ve seen this all before - protests scarred through disproportionate police violence. Michael Brown. Eric Garner. Ghosts who remind us how, at any moment, tragedy can strike.

Read More: This Super Bowl Ad's Simple Message Is the Most Powerful of Them All

But, no - Jenner passes a Pepsi can to an officer, who, smiling like a smug Jason Biggs at the end of American Pie, gives a curt nod to his stern colleague, universal frat language for “Everything is fine! Everything is awesome! Did I mention how absolutely fine everything is?”

"Kendall please! Give him a Pepsi!" pic.twitter.com/IntFNmCpTr

She should have brought a Pepsi pic.twitter.com/efxRXekSGZ

Protesters hold Moonpig placards in numerous languages that read either “join the conversation”, “peace”, or “love”. There are no calls to action, and, even less forgivably, there are no puns. This extended suspension of disbelief is held only by Bob Marley’s grandson singing about movements and rights and stuff in the background, as a young man twirls a drum stick through his fingers, his kit left mercifully behind in his three-bed bachelor pad with adjacent recording studio paid for by his parents. The cellist has brought his cello, and it looks impractical.

Read More: This Super Bowl Ad About Immigration Was Deemed 'Too Controversial'

Meanwhile, a woman in a hijab takes photographs, crouched behind the action, as she gleefully snaps Jenner, a powerful white woman, taking control of the situation as she approaches the police. All the while, onlookers ignore the carnival, distracted by a weekday brunch of gastro-burgers and avocado. They talk of the explosive cultural comeback of denim.

Director: "young lady in the head thingy, I want you to look like you just realized HOW LUCKY you are to be witnessing this. Because u are" pic.twitter.com/srqcPKq8mS

It looks like a Return of the Jedi victory parade, as if the battle is already won. But the ad, called "Live for Now Moments Anthem", praises a social justice triumph that is yet to be achieved. It envisages a moment, 500 years from now, when an international holiday marks the official declaration of total equality, and when young black men are no longer nine times more likely than white men of the same age to be killed by police officers in the US. In fact, it's a time when nobody dies at all - a problem that was fixed years ago. Racism is long gone, as all the isms were banished forever by the Great “Please Don’t Suck” Bill of 2321.

Read More: Nike Released a Stirring Ad on Equality That You Need to See

But Pepsi’s slogan is “live for now.” And “now” is not quite as pretty. The video doesn't make a clear political point - it just piggybacks the aesthetic of unity attained by the process of protesting. Activism can't be bottled up and sold, and, ultimately, the advert falls at the first hurdle to create any meaningful message about why diversity is something to be treasured. It's unsurprising - how can you prioritise social justice when your primary purpose is to sell fizzy drinks? From this moment on, let there be no misconceptions: America's fraught history with police brutality is not an issue that can seamlessly slide into an international marketing campaign.

I have a Pepsi." pic.twitter.com/NW0sddKOOI

If only Daddy would have known about the power of #Pepsi. pic.twitter.com/FA6JPrY72V

At its best, the advert tries to make a point about social justice with positive intention, but poor execution. At its worst, it undermines the brutal realities of why people protest. 49 years ago yesterday, Dr. Martin Luther King was shot and killed in Memphis, Tennessee. King often spoke of African Americans being “staggered by the winds of police brutality”. From Baton Rouge to Ferguson, the harsh winds still rage unencumbered.

But brands are starting to understand the fact that social justice sells. In 2017, people are mobilising in greater numbers than ever before. And where there’s community, there will be commodity.

But don’t despair —  do you notice that there’s only ever appropriation when the stuff being dumbed down was utterly brilliant to begin with? The world is truly waking up to the problems ahead, and everybody, Jenner included, is welcome to join the real fight. ”Now I’m not one to lose hope,” Dr. King once remarked. “I keep on hoping. I still have faith in the future.” So do we.