After surviving the deadly disease, she fell victim to a broken health system. 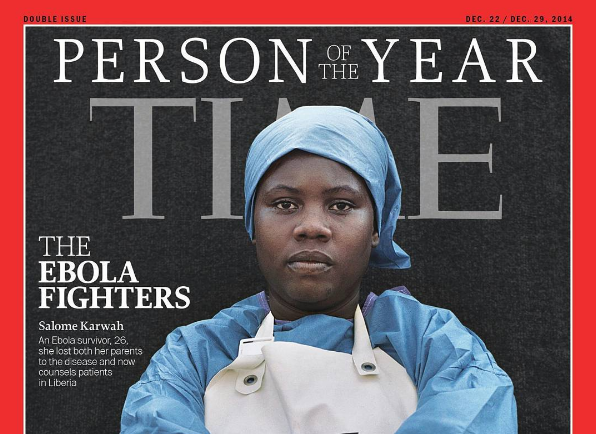 Salomé Karwah, a Liberian woman who survived Ebola and went on to be named a TIME Person of the Year for her work fighting the disease, has died from complications in childbirth.

Family members, devastated by the news, believe hospital staff were reluctant to treat her because of the persistent stigma surrounding the disease that killed more than 11,000 people in her country, according to TIME magazine.

A few hours after being discharged, Karwah lapsed into convulsions. Her husband and sister drove her back to hospital, but no staff members would touch her. She died on February 21, four days after giving birth to her child.

Read More: These Are the Most and Least Healthy Countries of 2016

“They said she was an Ebola survivor,” her sister Josephine Manley told TIME. “They didn’t want contact with her fluids. They all gave her distance. No one would give her an injection.”

“My heart is broken,” says Manley. “Salome loves her children, her James. The 1-year-old, the newborn, they will grow up never remembering their mother's face.”

Karwah’s brave contribution to the fight against Ebola made history when she made it onto the cover of TIME. At the time she was nominated as a Person of the Year, TIME describes her as “invincible.”

I just can't get her out of my mind.Salome survived #Ebola, but died during #pregnancy. Poor #healthcare is scarier than a virus. #RIPpic.twitter.com/2CtVRdI41C

Ebola claimed the lives of her mother, father, brother, aunts, uncles, and a niece. Karwah, her sister, and her fiancé also contracted the disease, but were fortunate to survive.

“I was shocked that I had lost both my parents,” Karwah wrote in The Guardian in 2014. “But God spared my life from the disease… God could not have allowed the entire family to perish.”

Once a person has survived Ebola, they develop a resistance that enables them to come into direct contact with Ebola patients without contracting the disease. According to TIME’s profile, Karwah used to joke that her survival  had given her “super powers,” an ability she was determined to use for good.

After recovering, she returned to the Médecins Sans Frontières hospital where she had received treatment, and committed to helping her community heal.

Read More: What You Need to Know About Global Health

We are shocked and saddened to learn of the death of Salome Karwah, #Ebola survivor and fighter https://t.co/iEJNa4BrEm

“I find pleasure in helping people, and that is what brought me here. My efforts here may help other people to survive,” she said.  “I feel happy in my new role. I treat my patients as if they are my children. I talk to them about my own experiences."

“I tell them my story to inspire them and to let them know that they too can survive. This is important, and I think it will help them.”

Yet at the time, she knew of the stigma surrounding the disease and those who survive.

“My neighbours were still afraid of me," she added. A few of them welcomed me back; others are still afraid to be around me – they say that I still have Ebola. There was a particular group that kept calling our house “Ebola home”.

Sadly, the lingering stigma may now have cost her her life.

Ella Watson-Stryker, who worked with Karwah in the MSF centre, said: “To survive Ebola and then die in the larger yet silent epidemic of health system failure … I have no words.”

she survived ebola but didn't survive pregnancy. there's an entire thesis to be written about that sentence. https://t.co/4NWg7JBWbO

Liberia has one of the highest rates of maternal mortality in the world, with 1,072 maternal deaths for every 100,000 births. Before the Ebola outbreak, Liberia had just 50 doctors to serve its population of 4 million people. The impact of the epidemic has exacerbated poverty levels in this already fragile country, where more than 83% of the population live on less than $1.25 USD a day. Fear of the disease continues to stalk a country still reeling from its effects.

"Emergencies like these create lasting effects, partly because they can be so destructive to the social fabric of a country or community," said Richard Mallett, research officer at the Overseas Development Institute.

Salomé Karwah’s story is one of courage, commitment and compassion. Her death is a tragic reminder of the need for stronger health care infrastructure to fight epidemics like the one that killed her family members, and so many of her fellow citizens — and to ensure that a woman that survives a deadly disease can also survive childbirth.