What are you reading this for? Get out and find them! 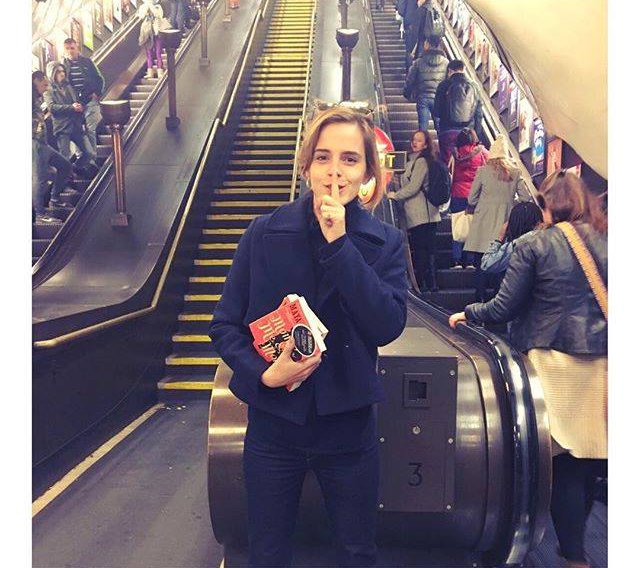 Imagine. Today is just like the one before. You wake up, hit the shower, lock the front door on your way out. As you edge closer to the platform, you ignore the impatient crowd jostling for space around you. Somebody is sniffing loudly and standing too close to you. Because somebody always stands too close to you. By the time you’re on the escalator moving toward the exit, you’re stressed.

But something is different today. You recognise the face of the woman in front of you, and she’s placing a beautiful orange book by Maya Angelou alongside the rail.

Emma Watson rode the tube yesterday. Some say it was at Oxford Circus station, others are claiming it was at St. John’s Wood station. But one thing is for sure: she was there dropping off books for people to read for the Books On The Underground project.

We were delighted to welcome @emmawatson as a #BookFairy today as she hid copies of the next #OurSharedShelf book, Mom&Me&Mom on the London Underground... #books #emmawatson #booksontheunderground

A photo posted by Books On The Underground (@booksontheunderground) on Nov 1, 2016 at 3:22pm PDT

The Books on the Underground project does exactly what it says on the tin. Volunteers, called "The Book Fairies", hide books around London tube lines to encourage people to read and then return. Think of it like a library that’s alive. And their latest recruit is bringing it to the masses!

Copies of the #OurSharedShelf read Mom&Me&Mom travel the tube today, with a special something inside from @EmWatsonpic.twitter.com/uQs1eZbkPo

Watson left around 100 copies of Maya Angelou’s "Mom & Me & Mom". The final book in Angelou's series of autobiographies, its her November pick for online book club Our Shared Shelf. Watson’s aim is to get as many people reading about equality as possible, in a world where two-thirds of the world’s illiterate adults are female. She even left handwritten notes to the reader, encouraging them to “leave it on the tube again” once they’d finished with it.

Of course, we knew all along that Watson, a UN Goodwill Ambassador, adores reading. She’s just taken a year out of work to focus on feminism and gender studies. More recently, she’s also thrown herself into work fighting rape culture in places of education, and tackling child marriage in Malawi.

But this is the next level. As you can imagine, commuters lost their heads a bit.

I JUST SAW EMMA WATSON ON THE TUBE. I REPEAT: HERMIONE GRANGER ON THE TUBE

imagine going on the tube in the morning and finding a book with a note from emma watson in it, i'd die