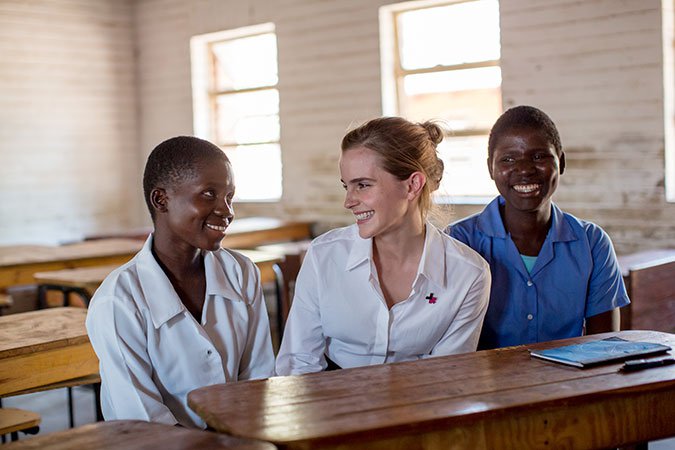 Girls should be able to make their own choices about when to get married, Emma Watson told local leaders during a trip to Malawi on Monday.

The actress and UN Goodwill Ambassador was in the southeastern African country with UN Women as part of the International Day of the Girl Child. And as she seems to do everywhere she goes, Watson had a message of gender equality to share with her audience there:

“Meeting with young girls, who, like many in their country, are struggling with poverty and were pressured into early marriage, depriving them of their education in the process, made me realize just how important it is for women to be able to make their own choices,” Watson said in a statement.

The self-proclaimed feminist met with schoolgirls and tribal leaders in Malawi, which has been a focal point of UN Women’s efforts to end child marriage. In 2015 the country passed a law raising the minimum age of marriage to 18, and the UN has been working with local tribal leaders to end the practice.

Malawi President Arthur Peter Mutharika said he hopes all of the tribal leaders will be fully implementing the law within five years, according to the UN report.

Watson met with girls in Malawi who had been married at an early age and had their marriages annulled so that they could return to school to pursue education, the UN said. She called the visit a “moving and inspiring experience” and said that Malawi’s progress was an example of how communities can work together to effect change.

The trip highlighted the work of Chief Theresa Kachindamoto specifically. A tribal leader nicknamed the “Terminator,” Kachindamoto has annulled nearly 1,500 child marriages. Kachindamoto said that she now tries to educate parents of girls to prioritize education over marriage.

“I try to convince them that if you educate your girl, you will have everything in the future,” she said.

According to a report released this week by Save the Children, a girl is married off once every seven seconds around the world. There are now approximately 700 million women around the world today who were married as girls; a third of them before their 15th birthdays.

And while most countries — nearly 90 percent — have laws that prohibit marriage under the age of 18, many allow children to marry early with parental consent, while some, like Guatemala, have a legal marriage age of just 14.

Child marriage can put girls at risk for dangerous pregnancies and childbirths, and often ends their educations and career opportunities. The UN — and Global Citizen — continue to fight for an end to the practice around the world.