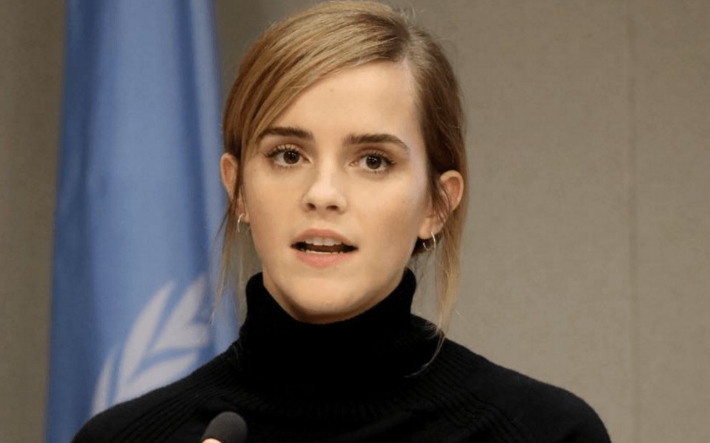 Emma Watson has delivered yet another striking speech at the UN this week as she announced the HeForShe IMPACT 10X10X10 University Parity Report. The initiative brings together leading figures in education, business, and politics to challenge the gap in gender equality all around the world. For Watson, this must begin structurally at University, where issues of sexism are often intensified. In particular, she addresses sexual violence as a key battle ground, where gender disparity is as wide as ever.

“What if, as is the case in far too many universities, we’re given the message that sexual violence isn’t actually a form a violence?”, Watson says. “The safety of women, minorities, and anyone that may be vulnerable is a right, not a privilege. A right that will be respected by a community that believes and supports survivors, and that recognises that when one person’s safety is violated, everyone feels their own safety is violated.”

HeForShe began exactly two years ago, launched alongside another viral UN speech from Watson that challenged traditional expectations of men and women. In many ways, Watson helped to popularise feminism,inviting everybody in to participate in total equality for all. Importantly, her definition insists that men actually have a crucial role to play. Especially in the case of sexual violence, men must act to change the common narrative.

The ten IMPACT education champions represent universities that can reach up to 700,000 students and 40,000 faculty staff, but this is just the first domino. Including the University of Oxford and the University of Leicester in the UK, these institutions can begin to change the way we look at campus sexual aggression from the top down. As Watson continues, “a University should be a place of refuge that takes action against all forms of violence”. Yet, unjustifiably, this could not be further from the actual experience that most women are put through.

In the US, 23% of female students have reported experiencing unwanted sexual contact. Worldwide, the statistics make for even more depressing reading. One in three women globally will experience some form of physical or sexual assault in their lifetime. Such a morbid situation is grimly reflected in the UK, where 31% of female students polled reported being victim of “inappropriate touching or groping”. An even larger volume never even come forward.

When we think of Brock Turner, what’s the first thing that springs to mind? Is it his achievements as a champion swimmer at Stanford University? Or is it as a convicted sex criminal? Although the maximum sentence is fourteen years, Turner was sentenced to just six months in jail after sexually assaulting an unconscious 22 year old woman behind a bin, and was released after just three months for good behaviour. All because the judge felt that an extended sentence would have “a severe impact on him”.

Global media continues to press a narrative that emphasises a tragic fall from grace. Turner is the once exceptional student who had a bright future ruined by what Turner’s own father described as “twenty minutes of action”. Yet, the voice of the victim passes unheard, ignored by a culture that grants her no space to speak. The judge took Turner’s potential into consideration at the total disregard of his victim’s. Before sentencing, she addressed Turner directly in court, asserting that “assault is not an accident”. The immensely powerful statement can be read in full here.

RAPE CULTURE: Brock Turner's dad is sad he only got "20 minutes of action" & doesn't even like eating steaks anymore pic.twitter.com/eQswM8Lb11

Sexual violence on campus is not just an American problem. Jonathan Lapwood, a student at Oxford University, was arrested just this week on suspicion of rape and serious bodily harm. Shockingly, Oxford is also one of the universities that have put themselves forward for Watson’s IMPACT team to tackle gender inequality. A Telegraph article on the case caused uproar on Twitter, after referring to the accused as primarily “‘highly intelligent”’ in its headline. Is this man defined first by his positive characteristics, and then by his alleged crime? Why is the accused described as intelligent, but not the victim? Lapwood, part of a group of students that styled themselves as the ‘Banter Squadron’, is a beneficiary of this patriarchal rape culture where the wellbeing of the perpetrator is preferred to that of the victim. The Telegraph later amended their headline after an onslaught of online criticism, yet still used a “‘source”’ to imply that the accusation might have been nothing more than somebody “petty” attempting to “settle a score”. Sickening.

Rape culture is real. It asphyxiates you into a thought process where you doubt the woman before the man. It provokes you into seeing a short skirt as an invitation. It poisons you into accepting a line of behaviour where men can happily pursue the satisfaction of their own desires at the total expense of the woman being recognised as a human being. Just this week, a man reportedly attacked a woman in Seattle whilst shouting “rape culture is awesome.” At what point do both men and women join together in recognising the problem at hand?

Read More: Amal Clooney on Nadia Murad, "I Can't Walk Away From This"

Young men and women go to university for an education. So let’s educate. Rape culture is absolutely central to every act of sexual violence on campus. Too often, men are taught that women are an object to be chased, caught, and owned. Too often, women are taught not to complain, not to speak out, and not to challenge the status quo. In the UK, this is justified under the pseudo-masculine moniker of ‘lad culture’. Watson is a powerful mouthpiece to the movement fighting this. It’s a problem for women, and it’s a problem for men. We must all do our bit.