Some have criticized the film's focus on wealthy Chinese Singaporeans. Here's what you should know.

Why Global Citizens Should Care
With its all-Asian cast, Crazy Rich Asians is major win for diverse representation in Hollywood. But the film portrays Singapore’s elite and has been criticized for failing to showcase Singapore’s diversity accurately. About 25% of Singaporeans are Malay, Indian, and Eurasian, but the absence of this population in Crazy Rich Asians reflects Singapore’s rising inequality. You can take action here to support the Global Goals and equality for all.

Crazy Rich Asians — the first Hollywood film to feature all-Asian cast and an Asian-American lead in 25 years — is a box office hit, proving once again that diversity and representation in the media not only matter, they also sell.

The film, based on Kevin Kwan’s novel of the same title, is a modern-day love story. It notably lacks the stereotypically nerdy characters and broken English dialogue typical of many Western films set in Asia or featuring a heavily Asian cast — and people are loving it.

Instead, two Asians actors, Constance Wu and Henry Golding, occupy the romantic lead roles Hollywood has historically reserved for white actors. And many have shared on social media what finally seeing Asian actors in those roles has meant to them.

You’re 25 years old.
You see a movie with an all-asian cast at a screening and for some reason you’re crying and you can’t stop. You’ve never seen a cast like this in Hollywood. Everyone is beautiful.
You’re so happy you’re Chinese. #CrazyRichAsians#RepresentationMatters

As a KoreanAm adopted into whiteness, #CrazyRichAsians was everything I needed in my youth. No othering or tokenization. For once, I felt we were the default. Must be how white people feel most of the time. Beauty, romance, fantasies, & laughs made for us. Wow. 💛 More please!

So, okay, I watched @CrazyRichMovie yesterday, & I was fighting tears the whole time. I'd expected it to be meaningful, fun, joyful, but I hadn't at all expected what amounted to a lifetime of sorrow & longing, an onslaught of feelings I hadn't even known I was suppressing.

I never got to see an Asian American badass woman who was raised by a single parent mom on the big screen & for that story alone, @CrazyRichMovie had me crying the happiest tears. Thank you @ConstanceWu for portraying that role so honestly and amazingly! #CrazyRichAsiansMovie

Y’all gotta watch and support #CrazyRichAsians because I saw this movie today, and sobbed because I am an Asian-American woman, and to see the clash between Asian culture and Asian-American culture on the screen makes me feel like I am finally being seen and heard.

Fans and entertainers — including Lena Waithe and Harry Shum Jr., who appears in Crazy Rich Asians — bought out theaters to give the movie a #GoldOpen. And it worked. In its opening weekend, the film — primarily set in Singapore — brought in $25 million and has now earned more than $35 million since it was released on Aug. 15.

But while Crazy Rich Asians is certainly a milestone for diversity in Hollywood and has raised the bar for Asian representation in entertainment, there’s a lot it leaves out.

As a woman of Asian heritage who has lived in the US for several years now, it was exciting to see people who look like me and share my culture on screen. As someone who was born and raised in Singapore, it was thrilling to see actresses like Koh Chieng Mun and Selena Tan, whom I knew from local TV shows, on the silver screen in New York City.

In many ways, the film was a poignant reminder of home — from the Central Business District’s gleaming skyscrapers to Bukit Pasoh’s colorful shophouses to mouth-watering hawker food. But, for me, one thing was glaringly left out of the film — and it wasn’t a highly choreographed martial arts sequence or a joke about Singapore’s chewing gum ban.

Despite being set in a country where nearly a quarter of the population is ethnically Malay, Indian, or Eurasian, people of non-East Asian heritage were noticeably absent from Crazy Rich Asians — and people, especially Singaporeans, have been quick to point that out.

4. Also, this isn't just some "oops we never noticed" blunder. Brown people appears as the help in the background. Someone cast that. Someone cast those brown extras in #CrazyRichAsians, while the main cast was mainly East Asian.

4. A triumph for representation? Maybe for Asian-Americans but certainly not for #Singapore#CrazyRichAsiansMovie

Chinese dominance is made clear in #CrazyRichAsians. Asian actors and actresses of darker skin tones are only seen working mutely as chauffeurs, domestic workers, and guards. Set against the distracting opulence of the mansions, these minorities are made insignificant.

We can love, support AND criticize something at the same time.#CrazyRichAsians is ground-breaking for representation in Hollywood. FACT.

"Asians" does not mean ALL Asians. FACT.

The movie does not cover the often oppressed brown & non-Chinese people of Singapore. FACT.

But the absence of non-East Asian actors in the film isn’t necessarily a casting error. It’s a reflection of the implicit, and explicit, biases that non-Chinese people in Singapore face.

Both the film's director, Jon M. Chu, and its female lead, Constance Wu, have acknowledged that Crazy Rich Asians does not represent every Asian American’s story. In fact, it doesn’t represent every Singaporean’s story either, and it’s important to acknowledge who the film left out and what it left unsaid.

Read More: Sandra Oh Is the First Asian Woman to Be Nominated for a Lead Actress Emmy

Crazy Rich Asians is a story about the most “atas” — Malay meaning “high class,” with the connotation of arrogance — of the “atas.” It’s a story about “the 1%” — or in Singapore’s case, the upper echelon of the 20% that holds 73% of the country’s wealth — and their unwillingness to accept outsiders. And in Singapore, those people are largely of Chinese heritage (though it is worth noting that Singapore's wealthiest have historically been and are still generally more ethnically diverse than the social circle depicted in the film).

Because Crazy Rich Asians is a story about this particular subset of Singapore’s population, it can’t accurately portray the Southeast Asian nation as a whole. It almost entirely leaves out Singaporean Indians and Malays, as well as the many migrant workers who have literally helped to build Singapore, and whose labor on which the country thrives.

People of non-East Asian descent — particularly Indians and Filipinos — appear in the film as guards and servants, not as friends or peers. That’s not the reality most Singaporeans know. The “Little Red Dot,” as the island nation is known, is very multicultural and the Singaporean government has long held multicultural education and integration as priority, even establishing ethnic quotas for government-subsidized housing — in which 80% of population lives — to ensure races do not become segregated on the island.

However, while the over-the-top rich and purely Chinese crowd Crazy Rich Asians portrays is far from reality, it’s not wholly inaccurate.

What the film indirectly shows through its absence of non-East Asian actors and characters is how the country’s massive income inequality and poor social mobility intersect with race both among the local population and migrant workers.

Of Singapore’s population of 5.6 million, more than 1 million foreigners also live and work in Singapore.

Read More: 3 Out of 5 Maids Sleep In Closets, Balconies, and Storage Rooms in Hong Kong

More than 280,000 migrant workers — from countries like India, Bangladesh, Malaysia, and China — live in Singapore and work in construction. They are responsible for building the shining skyscrapers that give Singapore its modern, glamorous glow in the film.

Though they came to Singapore in search of better employment opportunities than those in their home country, many foreign domestic workers and migrant workers experience abuse and exploitation, according to Human Rights Watch. They face challenges collecting their wages, are often subjected to recruitment fees — fees agents in their home countries and Singapore may charge in order to help them secure jobs — and have limited legal protections as foreign workers, CNN reported.

Among Singaporeans, research has shown that racial discrimination and income inequality among ethnic groups also persists. Despite little difference in educational achievements, ethnic Indian and Malay Singaporeans tend to earn less than Chinese Singaporeans across industries.

The tiny island nation boasts the highest income per capita in Asia and was touted as the country with the highest percentage of millionaires in 2010, but inequality and poverty is increasingly becoming a problem in Singapore. 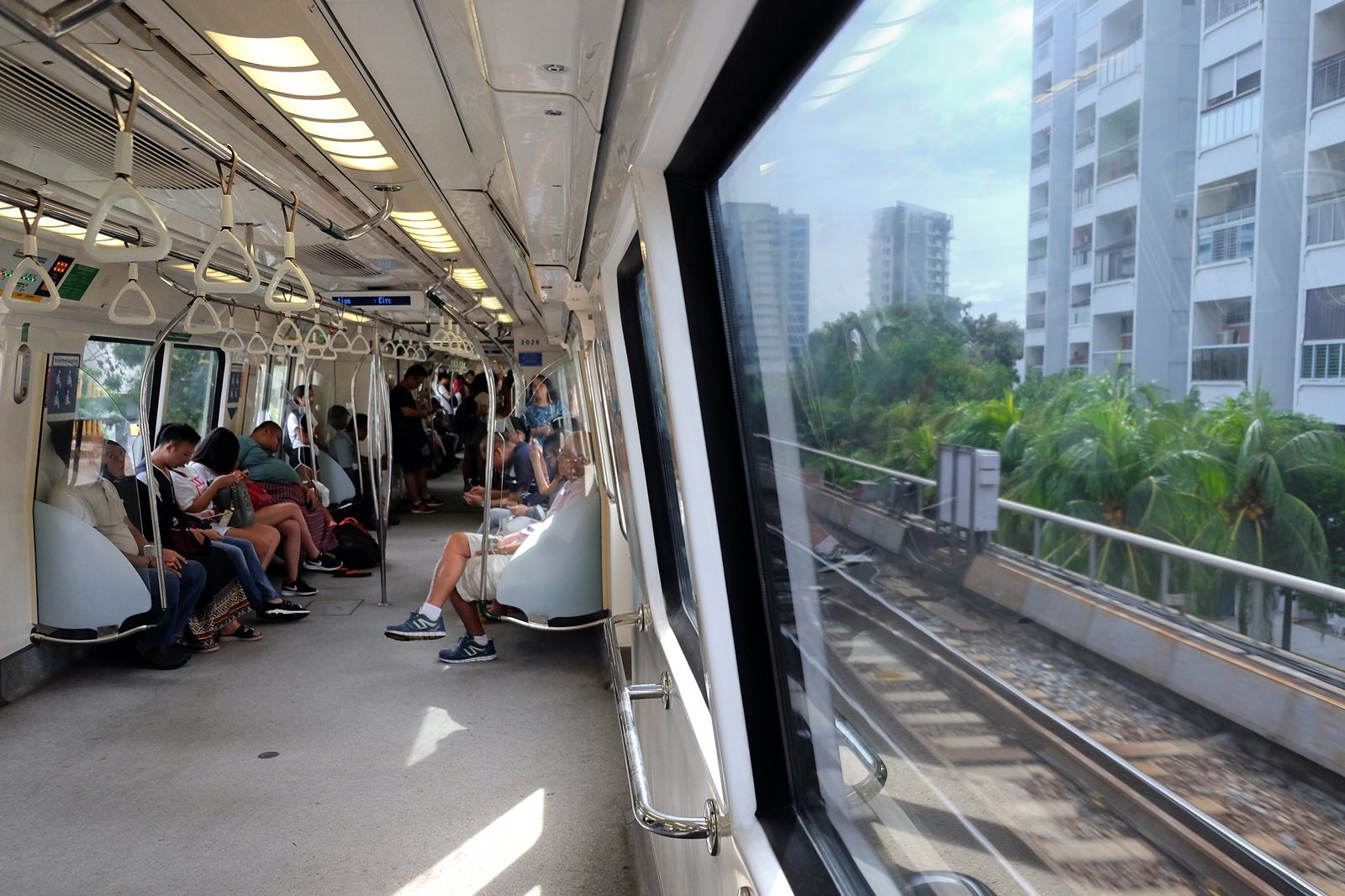 Singapore — which is both a country and a city — was named the world’s most expensive city to live in for the fifth year in a row by the Economists Intelligence Unit in March. And though household incomes across Singapore rose in 2017, incomes increased at a significantly lower rate among the bottom 50% of households.

Income inequality in Singapore reached its highest in a decade in 2016, earning the country a .458 Gini coefficient — which measures income inequality, giving a 1 rating for perfect equality — and remained at approximately the same level last year.

The Singaporean government has not established an official poverty line metric, but economists estimate that up to 14% of Singaporeans struggle with “severe financial problems and have difficulties meeting basic needs.”

As Chinese Singaporeans in particular continue to amass and maintain wealth in the country, the government worries that racial and class divides will become more deeply entrenched.

"The issues of mitigating income inequality, ensuring social mobility, and enhancing social integration are critical,” Prime Minister Lee Hsien Loong said in Parliament earlier this year. “If we fail — if widening income inequalities result in a rigid and stratified social system, with each class ignoring the others or pursuing its interests at the expense of others — our politics will turn vicious, our society will fracture and our nation will wither."

In other words: the excessively wealthy, exclusively Chinese society that refuses to accept outsiders depicted in Crazy Rich Asians is precisely what the government fears will become a reality.

While Crazy Rich Asians is certainly a win for representation, particularly for Asian Americans of East Asian heritage, the extravagant wealth that gives the film its fun glitz and glamour tells another story: one of rising inequality and discrimination that can’t be reversed with a strategic game of mahjong.