Somali refugees are pictured at the Ifo refugee camp in eastern Kenya on Aug.7, 2011. Climate change contributed to low rain levels in East Africa in 2011, making global warming one of the causes of Somalia's famine.
Jerome Delay/AP
Defend the Planet

Why a Climate Refugee Crisis Is Actually Far From Inevitable

Policymakers can address the underlying conditions that force people from their homes.

The wildfires burning along the West Coast of the United States. Droughts overwhelming East Africa. Rising sea levels around Jakarta. All of these disasters have been worsened by climate change.

Now these catastrophes are fueling another crisis: climate change displacement.

Some of the tens of thousands of people who fled their homes in California, Oregon, and Washington will ultimately return to their communities and rebuild when the land cools.

Others will become migrants. Most of Jakarta’s residents really have little choice in the matter as the capital city disappears. Meanwhile, East Africa is facing a surge in migration as sources of income dry up.

These events open a pandora’s box of difficult questions for governments worldwide. What sort of aid should those displaced by climate change receive? Should their movement be facilitated or deterred by the state? If they tried to migrate to another country or became refugees, should they receive special protections? 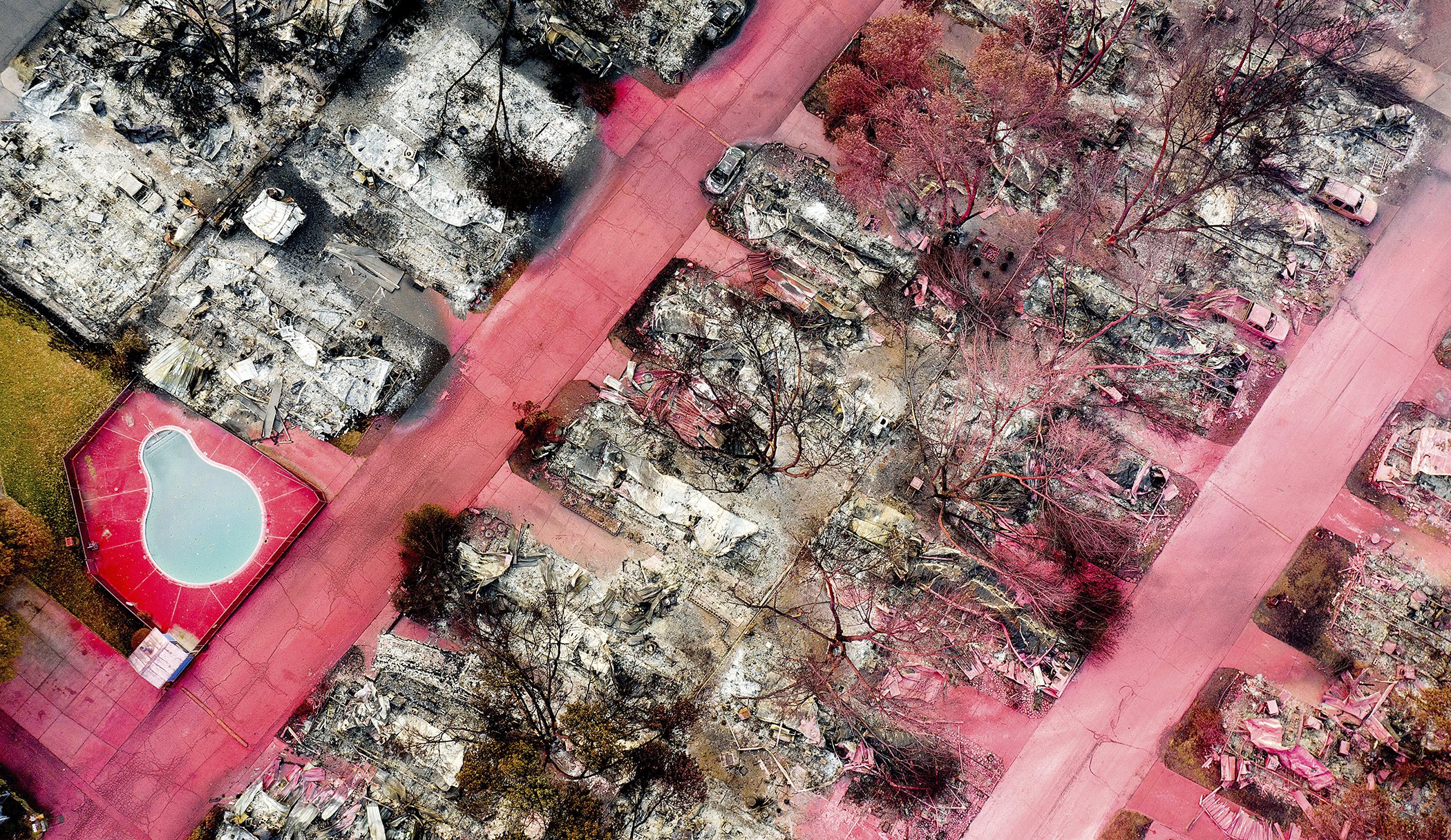 In this aerial photo taken with a drone, fire retardant blankets leveled homes in Talent, Ore., on Sept. 15, 2020, after the Almeda Fire tore through the area.
Image: Noah Berger/AP

In the years ahead, scientists warn that human movement across and within borders due to climate change-related events will exponentially increase. This will create new categories of migrants and refugees that strain concepts of citizenship, aid, and multilateral cooperation. And happening at a time when the very idea of migration has come under attack and refugees and asylum seekers are routinely denied safety.

Unless countries design policies and protocols to deal with this dynamic, conflicts could rise, economies could falter, and human suffering could greatly increase.

A new meta-analysis of 30 country-level studies on climate migration was published in the science journal Nature on Sept. 14. The analysis seeks to bring some clarity to the topic by sifting through the existing data.

“Even within the same studies, estimates of the size and direction of environmental migration flows vary considerably,” the authors wrote in the analysis. “The unsettling heterogeneity of the existing evidence hampers policy efforts to address the challenges related to potential increases in global migration flows due to future environmental change.”

By identifying trends and drawing conclusions about climate migration, the report could ultimately empower policymakers, Jesus Crespo Cuaresma, a researcher with the International Institute for Applied Systems Analysis’ world population program and coauthor of the analysis, told Global Citizen.

“We basically wanted to have a final word as of today about what the science knows about the role of the environment in particular as a driver of migration flows,” he said.

The authors found that middle-income countries in Latin America, the Caribbean, the Sahel region of Africa, and Southeast Asia with widespread agricultural sectors will likely experience the most migration caused by climate change in the decades ahead.

That’s partly because agriculture is uniquely vulnerable to climate shocks. Droughts, floods, increasing pests, higher temperatures, and extreme storms can wreck harvests and endanger livestock. If someone earns their income through farming, then a climate shock could jeopardize their livelihood, causing them to consider moving to a new area.

Low-income, agriculturally-dependent countries aren’t expected to see a similar rise in migration. This is because people living in the poorest countries don’t necessarily have the money and resources to undertake the expensive act of migration. People living in high-income countries, meanwhile, are better protected by broader social safety nets even if they face similar climate shocks.

“If you’re in a country that is agriculturally-dependent, meaning you are most likely engaged in agriculture, then every environmental shock is going to have a bigger likelihood of affecting your migration behavior,” Crespo said. “But if you’re in an extremely low-income country, then you may be trapped because you may not have the resources to make the move from a voluntary point of view.”

It's more accurate to say that the world's poorest will face the harshest impacts of climate change — rising temperatures, diminishing sources of food and water, and extreme weather events. And they’ll be unable to do much about it, constrained as they are by their circumstances.

The report notes that low-income countries in sub-Saharan Africa and southeast Asia — areas already facing severe climate shocks — will see relatively low migration due to this kind of pervasive poverty. 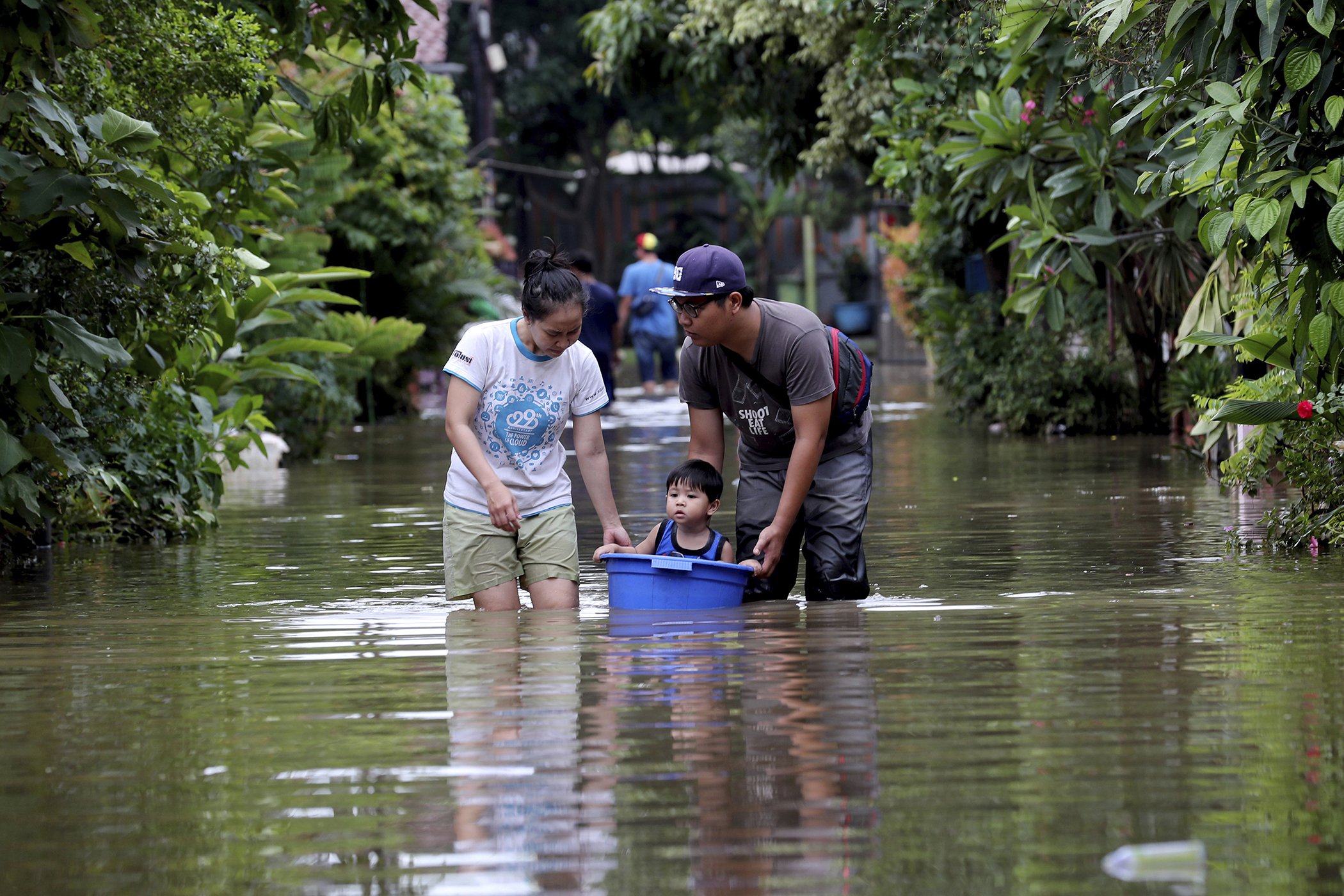 A family walks their son through a flooded neighborhood in a bucket in Tanggerang on the outskirts of Jakarta, Indonesia, Jan. 2, 2020.
Image: Tatan Syuflana/AP

The meta-analysis emphasizes that climate-fueled migration is inherently context-specific, with countless variables to consider. But there are clear patterns that can inform policy decisions.

Climate change migration depends on per-capita income levels, how people make a living, whether conflicts are likely, and, most importantly, the nature of the precipitating event.

The differences between rapid-onset events like the ongoing wildfires across the West Coast of the United States or gradual environmental changes like the rising sea level around Jakarta have to be carefully considered, Crespo said.

Rapid-onset events abruptly displace people from their homes, but don’t always cause long-term migration. Gradual environmental changes unfold over many years and can make life indefinitely unbearable for people. This is especially true for those who depend on a stable climate for their livelihood, which could cause migration if people have the resources and see better opportunities elsewhere.

Conflicts, meanwhile, can both exacerbate environmental changes and be triggered by them. The Syrian civil war, for instance, was partly triggered by drought-like conditions that spurred a flood of rural migrants into urban areas. And the Yemen civil war has been greatly worsened by droughts.

The next few decades could see a dramatic and destabilizing rise in migration and refugee flows. But countries can make investments today that prevent worst-case scenarios from happening.

First and foremost, countries have to reduce greenhouse gas emissions to prevent climate change from worsening in the years ahead, Crespo said. Similarly, the level of natural resource extraction globally has to be minimized to prevent ecosystems that sustain communities from collapsing. Further, countries should be rehabilitating and restoring degraded landscapes and marine ecosystems that can absorb carbon emissions and protect communities from natural disasters.

Next, countries have to invest in infrastructure that can withstand worsening climate events. Sea walls and drainage systems can help to deter coastal flooding. Fire-resistant buildings and homes can better survive wildfires. Green spaces in cities can buffer heat waves and decentralized electricity systems can help communities better adapt to disruptions.

Governments can also help farmers become more climate resilient by promoting crop diversity, restoring degraded landscapes, and providing grants and loans for irrigation and other forms of technology that make the most of potentially scarce resources.

Organizations like the United Nations’ International Fund for Agricultural Development (IFAD) are leading the way on this front by providing farmers with new technology, connecting them with new markets, and expanding access to better seeds. These efforts go hand-in-hand with reconfiguring food production and distrubution systems to focus on sustainability.

Broadening social safety nets can allow people to better withstand climate shocks in general, and bounce back from disaster. If someone has access to unemployment insurance and other benefits, for instance, they would still be able to afford food if they lost their primary source of income.

Finally, countries have to develop new domestic and international guidelines and policies around migrants and refugees.

The UN’s Global Compact for Safe, Orderly, and Regular Migration, which has garnered signatures from 152 countries, aims to ease the causes of migration, make migration safer, and improve the standard of living for migrants. Only a handful of countries, including the United States, voted against the compact.

If enacted globally, however, the compact could unlock crucial resources to help people worldwide move with dignity and safety toward home.