This Muslim Teacher Was Stopped From Traveling to the US, Even Though He’s British & Trump's Ban Was Blocked

“I couldn’t speak, I was lost for words.” 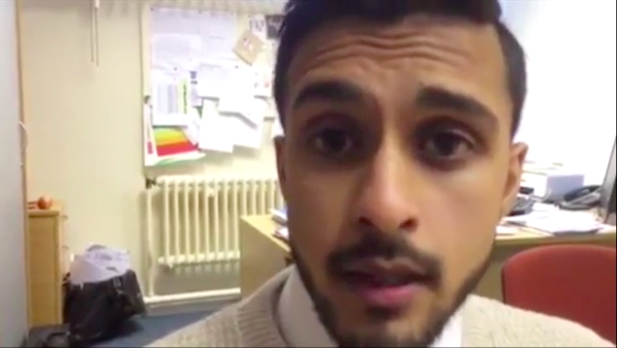 Screenshot from The Guardian

US President Donald Trump’s failed travel ban targeted immigrants from seven countries, none of which are the UK, and all refugees before it was unanimously blocked by a panel of federal judges Feb. 9 for being unconstitutional

But that didn’t prevent a British teacher from being the target of the discriminatory measure Feb. 16.

As Juhel Miah, a respected teacher at Llangatwg Comprehensive school in Wales, was traveling with his students and other teachers on a field trip from Reykjavik, Iceland, to the US, security personnel boarded the plane before it took off to remove him from the flight.

“Everyone was looking at me,” Miah told The Guardian. “As I was getting my luggage the teachers and kids were confused. I couldn’t believe this was happening. I was being escorted out. It made me feel like a criminal. I couldn’t speak, I was lost for words.”

Miah was then put in a grimy hotel room to await his fate. He had been barred from his travel plans, humiliated in front of his peers and students, and reminded of how discrimination is difficult to escape no matter where you go in the world.

Now he had to wait as the injustice of the situation dawned on the airline.

Miah’s experience is a galling example of how Trump’s immigration ban was really just a thinly veiled ban on Muslims and people who fit a profile of being Muslim.

Even though Miah is from Wales, and the travel ban had been blocked for a week by this point, he was still somehow a target.

These are self-evident, rhetorical questions. Somewhere along the way, he triggered someone’s prejudice and was cruelly denigrated, an experience that is all-too-familiar to Muslims.

“No satisfactory reason has been provided for refusing entry to the United States – either at the airport in Iceland or subsequently at the US embassy in Reykjavik. Mr Miah attempted to visit the embassy but was denied access to the building. Understandably he feels belittled and upset at what appears to be an unjustified act of discrimination,” Miah’s school told The Guardian.

Miah was eventually put back on a plane to the UK.

Read More: Do Refugees Cause More Crime? The Facts Say Probably Not

As the UK looks into what happened and tries to get some sort of justice for Miah, he won’t be the only one sorting through the effects of bigotry.

While Trump’s travel ban was in place, scores of families from Libya, Sudan, Somalia, Iran, Iraq, Syria, and Yemen, and refugees were discriminated against, made to feel criminal and other.

Prejudice is often framed as a logical, fact-based decision, as it was by the Trump administration when it justified the ban by citing security concerns.

For the Trump administration, the travel ban was undermined by the fact that no terrorist act had been committed by a refugee or any immigrant from the seven targeted countries. And it was further exposed when Muslims from other countries began to be targeted.

Prejudice is always based on misconceptions or willful distortions that lead to the sort of error that entangled Miah.

But it can be challenged and banished. People all across the US are standing up and challenging the Trump administration’s prejudiced actions. The swiftness with which it was rejected by the judicial system and the accompanying eruption of protests around the US is cause for optimism.

Global Citizen recently unveiled a new campaign called This Is America that aims to clarify the conversation around immigrants and refugees, to show that the US is a country built on and fueled by their collective aspirations.

Join us in defending and celebrating immigrants and refugees.