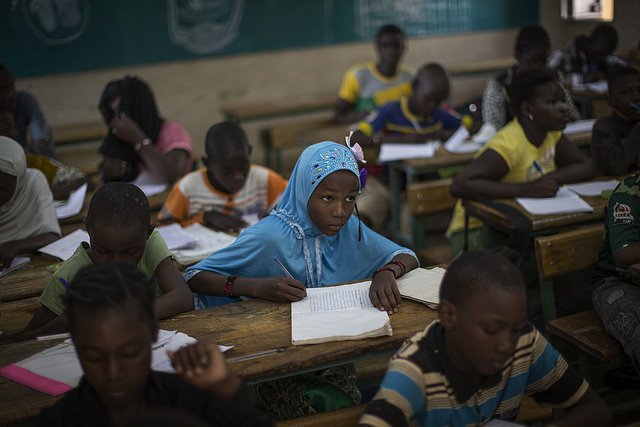 Kids like to complain about going to school — there’s too much homework, they don’t like their teacher, or they aren’t fitting in socially. But in many parts of the world, kids would give anything to sit in a classroom with a teacher who cares about their future, in a stable building with ample books and supplies. But because of various reasons — war, poverty, gender inequality — many kids around the world don’t get this chance. In fact, 61 million school-age children are not in school today.

Access to quality schools is a problem that’s felt the hardest in Africa. Nine out of 10 counties with the highest percentages of children who’ve never attended school were in Africa during the 2000s. And today, the 10 lowest-ranked countries in the United Nations’ Human Development Report Education Index are African as well. And while recent years have seen the region’s school enrollments rise, serious challenges still face these poverty-plagued countries grappling with how to provide access to education, keep kids in school, and foster learning. The picture that these nations’ numbers paint isn’t pretty, but as the stories of these countries show, there is always some improvement, help, and hope.

Rock bottom of the U.N.’s Education Index, this West African country of 21 million tallies their mean years of schooling at a mere 1.5 years. The least-literate nation in the world (little over 15 percent of adults can read and write), only 5.2 percent of citizens have any secondary education and nearly 31 percent dropout in primary school.

In Niger (as well as in Guinea) the stats are even worse for young women. In 2012, 70 percent of the poorest girls in those nations had never attended primary school. For those who went, it was a serious financial struggle. School supplies and materials totaled up to almost 75 percent of the poorest household’s spending on education. It is little wonder, then, that the number of years Niger expects its students to complete is less than six years.

Read More: Why School Cannot Stop When an Earthquake Hits

Four years in school is all that people in nation of 6 million in the Horn of Africa get to experience, on average. The conflict-ridden country can’t contribute much, either: Eritrea spends just 2.1 percent of their GDP on education. Making matters worse, the 69 percent of primary school-students who don’t drop out aren’t likely to get much individual attention if they’re having trouble with a lesson. But Eritrea is making some progress: the teacher to student ratio is about 41:1 down from a former class size of 55.

The third worst country on the U.N.’s Education Index, this volatile West African nation of nearly 19 million doesn’t expect that students will make it to eight years in school. The mean number of years Burkinabe spend in the classroom, after all, is less than 1.5. Just 29 percent of adults are literate, and only 2 percent of citizens have any secondary education at all (The students-teacher ratio is a dismal 46: 1). On the plus side, Burkina Faso has made improvements in reducing gender gaps in education, thanks to government policies and support. Last year, Michelle Obama and the Peace Corp got involved, too, selecting the nation as one of 11 countries on which their “Let Girls Learn” initiative focuses, aiming to champion women’s education. You go, girls!

Read More: 10 Barriers to Education Around the World

By one estimate, a third of Chad’s 14.5 million population will need humanitarian assistance this year, due in part to a refugee crisis that’s left little money or focus for education in the violence-riddled country in Northern Africa. The student to teacher ratio is a staggering 62:1 — and 35 percent of those primary-school educators are not even trained to teach. Perhaps not surprisingly, 49 percent of young students drop out. But the world hasn’t turned a blind eye. In February, the Global Partnership for Education provided an emergency $6.95 million grant to the semi-desert country to support schools for refugees and returning Chadians short- and long-term. “Education,” reads a blog from the organization,“is life-saving…[It] can provide a much needed sense of normalcy for a child whose entire world has been turned upside down.”

“School fees often prevent children in developing countries from being able to go to school,” according to UNICEF. Such may be the case in Guinea, one of only 13 low- or middle-income nations to charge secondary-school fees. The West African nation of 11.8 million enrolls just 38 percent of its secondary school-age population. (41 percent drop out at the primary level). Guinea’s student-teacher ratio is better than some of its neighbors at 44:1.

Read More: How This Woman Is Working to Bring Education to Emergency Settings

Sierra Leone, the land of “blood” diamonds, Ebola, and primary-school dropouts. Despite 100 percent of the civil war-torn West African country’s primary school-age kids enrolling in school, a heartbreaking 52.2 percent drop out. (The mean number of years citizens spend in school, in fact, is just 3.1). Adults aren’t academic either. More than 84 percent have no secondary education and 56 percent are illiterate.

Getting a proper education in Mali could be considered a gamble: Primary-schoolers essentially have a 50/50 chance that their teacher is trained to teach, since only 52 percent in the 18.2 million West African nation are. And while the 41:1 student-teacher ratio may not sound like a good thing, it does represent progress in Mali — where the expected total years of schooling is eight. According to UNESCO, the country has “more than doubled their primary school enrollment while reducing their pupil/teacher [ratio] by…about 14 pupils per [teacher].”

Described by the World Bank as “one of the poorest countries in the world,” the 828,000 citizens of teeny Djibouti (It’s smaller than the state of New Jersey!) in Eastern Africa are only expected to be in school about six years. Teacher and textbook shortages as well as crowded classrooms and dropouts have made educational progress tough. And though the World Bank reports that, “Djibouti has made significant progress in raising primary school enrollment to around 60 percent of all school-age children,” they add that enrollment rates are lower, and dropout rates higher, for students living in rural areas as well as girls.

Sudan’s conflicts and humanitarian crises clearly aren’t conducive to amping up education, not to mention economic- and gender-equality. The World Bank reveals that the 2010 “Sudan Household Health Survey shows that 53.4 percent of children in the poorest households are not in school, compared to 3.6 percent in the richest...with girls often facing a higher risk of not completing their formal education.” The Northern African nation of 36 million, it follows, pegs the mean number of years that citizens attend school to three.

Read More:Education + conflict zones = millions of kids out of school

With so few literate adults (39 percent) and students in secondary school (29 percent) in this Eastern African country of 99 million, it could come as a surprise that the World Bank reports that in the past 20 years, primary school enrollments have quadrupled. But here’s the rub: While the poorest children are enrolling in primary school, they’re also increasingly dropping out at higher levels too. Call it, sadly, one step forward, two steps back.