These Are the Worst Places to Grow Up Poor in England

If 2017 has taught us anything, it’s that the UK is a deeply divided nation.

Class, income, gender, race; there are numerous factors that lead to these social divisions.

Now, a new report examines one form of division that has received far less scrutiny over the years — geography. And it seriously debunks the popular belief that division in England is a north/south issue.

The reality, according to the annual State of the Nation report, is significantly more complex.

Take action: Theresa May Is Considering Policies to Win Over the Youth Vote — Let’s Make Our Voices Heard

“The country seems to be in the grip of a self-reinforcing spiral of ever-growing division,” said former Labour Cabinet minister Alan Milburn, who heads up the independent Social Mobility Commission (SMC), which produced Tuesday’s report.

“There is a stark social mobility lottery in Britain today,” he said, and Londoners are, generally, the winners.

“London and its hinterland are increasingly looking like a different country from the rest of Britain,” he continued. “It is moving ahead, as are many of our country’s great cities. But too many rural and coastal areas and the towns of Britain’s old industrial heartlands are being left behind economically and hollowed out socially.” 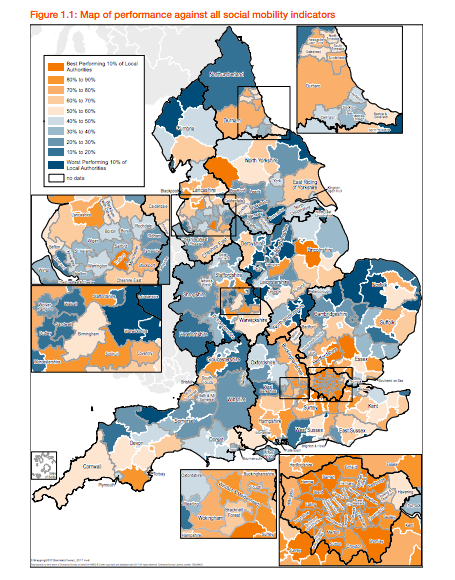 The State of the Nation report examines how good a start children are getting in life across England’s 324 local authority areas — and how good their prospects are to empower themselves.

It has ranked all of these areas, based on 16 social factors, to create a list of the best and worst places to grow up poor in England.

And while London’s social mobility is soaring — largely thanks to the rising quality of teaching in the city — Britain’s rural and coastal areas are being left behind.

At the bottom of the list are West Somerset, Newark in Nottinghamshire, Corby in the East Midlands, and Carlisle in the north west of England.

Derby, Ashfield, Blackpool, and north east Lincolnshire were also low down in the rankings. 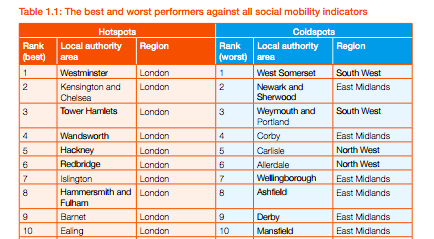 At the top of the ranking, however, are the London boroughs: Westminster, Kensington and Chelsea — in which every child on free school meals attends a good or outstanding school — Tower Hamlets, Wandsworth, Hackney, to name a few. In fact, London accounts for nearly two-thirds of “social mobility hotspots”.

Apart from London, English cities are “punching below their weight” on social mobility outcomes, reads the report. No other city makes it to the top 20% of hotspots.

And this divide has a serious impact on the future prospects of children living in these different areas.

While 51% of London’s children on free school meals get A* to C in English and maths GCSEs, that falls to 36% in all other English regions.

What’s more, while 50% of disadvantaged young people in Kensington and Chelsea go to university, in Hastings, Barnsley, and Eastbourne, that falls to just 10%. 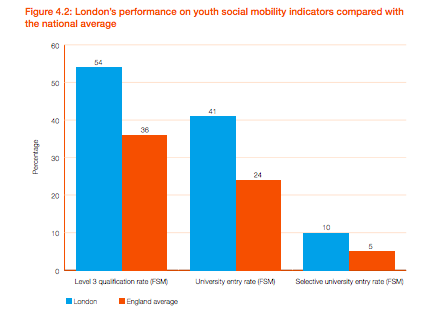 Education Secretary Justine Greening said the reports underlines “the importance of focusing our efforts in more disadvantaged areas where we can make the biggest difference.”

She added: “We are making progress. There are now 1.8 million more children in good or outstanding schools than in 2010. Disadvantaged young people are entering universities at record rates and the attainment gap between them and their peers has narrowed.”

Interestingly, these London boroughs seem to be bucking the trend that richer areas outperform poorer areas.

While London boroughs like Tower Hamlets, Hackney, and Newham are among the most economically deprived in the UK, the social mobility indices in the areas are among the highest in the country.

Meanwhile, wealthy areas like West Berkshire, Cotswold, and Crawley, are among the worst performing in terms of education, employment opportunities, and affordable housing.

Read more: Theresa May Wants to Know What Young People Care About — So We Asked Them

According to the report, a critical factor is the number and quality of teachers available — and it calls on the government to increase the proportion of spending on those parts of the country that need it most.

The north, it says, is underfunded by £6 billion a year compared to London.

“The chances of someone from a disadvantaged background getting on in life is closely linked where they grow up and choose to make a life for themselves,” the report reads.

“Tinkering with change will not do the trick. A new level of effort will be needed to tackle the phenomenon of left-behind Britain,” it says. “The growing sense that we have become an us and them society is deeply corrosive of our cohesion as a nation.”

“If we want a genuinely United Kingdom,” it finishes, “not an ever more divided one, a new approach will be needed.”

Global Citizen campaigns to achieve the UN Global Goals, including zero poverty and quality education. We believe that every child should have the best possible start in life, regardless of where they are born. You can join us by taking action here.