This is believed to be the first time a rhino was killed at a European Zoo. 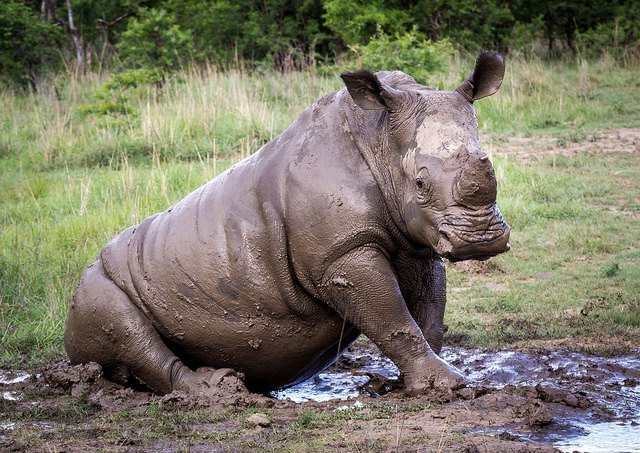 A southern white rhino was shot three times and killed, its main horn sawed off, in what the Thoiry zoo believes to be the first-ever instance of rhino poaching at a European zoo.

Vince, a 5-year-old male white rhino, was found dead in his cage on Tuesday morning at the Thoiry zoo, 30 miles outside Paris, France.

Poachers hacked off the rhino’s horn with a chainsaw, and began to cut the second horn. Police believe poachers were either interrupted or their equipment failed as they were trying to saw off and steal the second horn.

Take Action: Call on the UK Prime Minister to Protect the Oceans

The zoo had five security guards and cameras in place, along with a metal gate that poachers broke through, according to Reuters.

Vince had been at the Thoiry zoo for two years before the poaching attack. He was born at a zoo in the Netherlands in 2012, and transferred in 2015.

There were two other white rhinos at the Thoiry zoo. Gracie, a 37-year-old female, and Bruno, a 5-year-old male, were not harmed.

Yet the demand for the animal’s horn is high. Powder from rhino horn is considered a medicinal cure for cancer, headaches, and other illness. In Asian countries like Vietnam, a kilogram is valued at $100,000. The global average is valued at $53,000.

Until 1985, white rhinos were believed to be extinct. Then, a small group of 100 rhinos was discovered in South Africa. Through mass efforts, conservationists built up the number of white rhinos from 100 in 1985 to 20,000 today. Today, white rhinos are considered near threatened, and 98% can be found in South Africa, Namibia, Zimbabwe, Kenya and Uganda.

In the 1960s, 2,000 northern white rhinos roamed across Chad, the Central African Republic, southwestern Sudan, northern Democratic Republic of the Congo (DRC), and northwestern Uganda. Since then, civil war and poverty has completely devastated these regions, and wildlife has paid the price as well, on account of surges in poaching.

Though numbers of southern white rhinos are higher than in past decades, poaching clearly poses a great threat, and the cruel lengths people are willing to go for profit are disturbing.

Until people can value these animals above their horns, or tusks, and address rampant poverty in the region, poaching will continue.