"Who are you serving?" 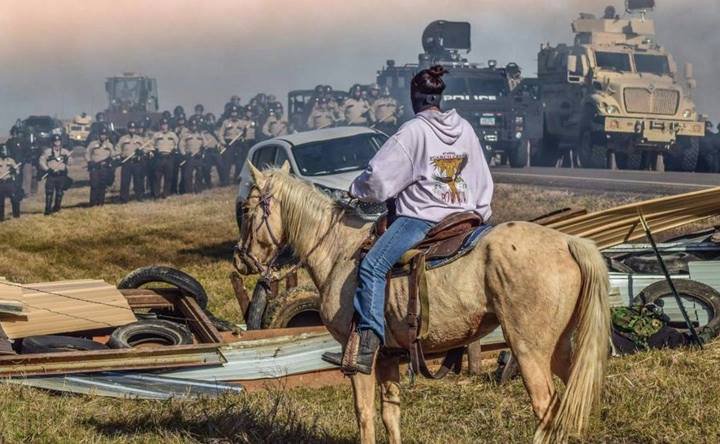 More than 2,000 United States military veterans will be traveling to North Dakota to stand with those who are peacefully protesting the Dakota Access Pipeline on Dec. 4.

The veterans will stand in front of the protesters to protect them from potential attacks from the police. Over the past few months, as protesters have peacefully blocked the pipeline's completion, police have routinely attacked and intimidated them in an effort to clear the way for construction of the formerly approved system. Veterans Stand for Standing Rock, a group comprised of veterans of all ages and backgrounds, believe this is morally and constitutionally wrong and are standing up for the protesters.

Read More: Standing Rock Protests Will Continue: The Latest on the #NoDAPL Fight

Their position has been eloquently laid out by veteran and former police officer Michael Wood.

And now they're asking for the support of Americans everywhere.

It's an inspiring act of solidarity that forces people to reevaluate the stakes of the conflict. As Wood says, "If the cops there want to be state-sanctioned agents to brutally beat non-violent veterans that have served their country honorably, if they're going to beat us, then that should be the signal to the rest of the world what our country's doing."

Wood also makes a powerful appeal to people all across the political spectrum. "If you are a conservative, this is limited government," he said in a video interview with Now This. "If you are libertarian and you want freedom for your people, this is it right here. If you're against money in politics and you don't want to see our police and soldiers being treated like private employees to beat citizens, [then this is your fight]. So, it doesn't matter where you come from in your approach, this is your fight."

Read More: These Activists Were Arrested in North Dakota Yesterday

Veterans are not the only group getting involved and lending their support to the cause of protecting water, the environment, and sacred lands. Medical professionals have also come out in huge numbers to provide help.

The Do No Harm Coalition beautifully describes their position here.

The struggle over DAPL has no end in sight, but there seems to be growing consensus in the country that Indigenous rights and water rights should be valued over the profits of an oil company.