These Activists Were Arrested in North Dakota Yesterday 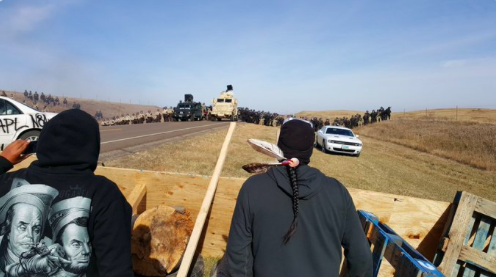 141 people were arrested in North Dakota’s Morton County on Thursday, after protesters blocked off a state highway, the Guardian reports.

Activists blocked the highway with hay bales and started fires with debris, the Morton County Sheriff’s Department said in a statement on Thursday afternoon.

Protesters and journalists on the scene alleged that police used tear gas against peaceful protesters.

“The government is attacking us for protesting, for protecting the water,” activist Rose Stiffarm told the Guardian.

As police activity ramps up in North Dakota, new technologies are bringing viewers at home unprecedented access to modern protest. Now, people can experience in real-time how a protest is unfolding and determine for themselves the accuracy of narratives that come out afterwards.

Protesters in North Dakota are fully aware of how this can offer protection.

While confrontations between protesters and police have been going on since April, yesterday’s events could indicate an escalation in the situation. Wired wrote that “tensions have been high” in the past several days. The Guardian called yesterday’s protests “the most intense conflict to date at the protest.” Fusion called it a “boiling point.”

"This is what it's all about," protestor says. "Sacred water." Not sure guys on left agree. #NoDAPL#DAPLpic.twitter.com/vHPRC2OHU5

Read more: Dakota Access Pipeline: Everything You Need to Know

In Brooklyn, protesters took over Hillary Clinton’s campaign headquarters demanding a statement from the Clinton camp on the proposed pipeline, Reuters reports.

This morning, a Clinton advisor told the Indian Country Today Media Network: “It's important that on the ground in North Dakota, everyone respects demonstrators' rights to protest peacefully, and workers' rights to do their jobs safely.”