The protest is ongoing despite 24° weather. 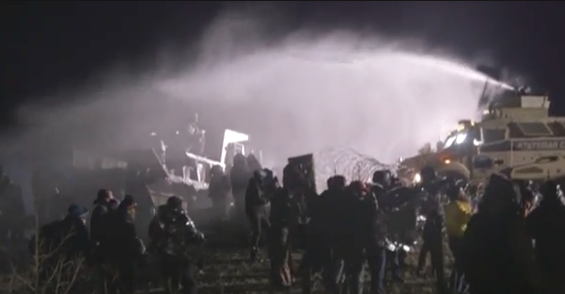 According to the protesters who spent this Sunday night huddled behind tarps in 24°F North Dakota weather, water cannons and concussion grenades were the latest additions to the police arsenal being used to quell opposition to the controversial Dakota Access Pipeline.

According to the Standing Rock Medic & Healer Council, a collective of doctors, paramedics, and nurses who volunteer medical aid to the protesters, over 300 people were injured throughout the course of the night.

“The Standing Rock Medic & Healer Council condemns the excessive police violence and calls upon law enforcement to cease and desist these nearly lethal actions,” said their press release, which was released on Facebook. “Specifically, we demand the cessation of water cannons in subfreezing temperatures.”

Read More: The Dakota Access Pipeline: Everything You Need To Know

Morton County Police have disputed the validity of the Council’s claims. In a press conference this Monday, Sheriff Kyle Kirchmeier explained that the police force didn’t have water cannons—  “This is just a fire hose”, he explained.

Bernie: "this is completely insane" pic.twitter.com/pVzG8HY55s

#DAPL is at least the second time @SenWarren has been MIA on a critical progressive issue. Fool me once...

“Anybody who has any common sense knows that if you spray people with freezing water in 24°  weather you are risking people’s lives,” said Erik Steele, a protester broadcasting through the Facebook live feed “Standing Rock Rising”.

The danger posed by water cannons has been affirmed by Jesse Lopez, a Kansas-city based surgeon and volunteer on the Standing Rock Medic & Healer Council.  “I maybe could see pepper spray, maybe rubber bullets, maybe tear gas, but water cannons? That’s done to inflict deliberate, severe, life-threatening harm,” he told The Intercept.

Police officers are also denying having used concussion grenades. However, 21-year old Sophia Wilansky was reportedly hit by one while she was handing out water bottles. “All of the muscle and soft tissue between her elbow and wrist were blown away,” said her father, Wayne Wilansky.

A further press release released by the council today claims that it was indeed a police-thrown concussion grenade. It cited “several eyewitnesses who watched the police intentionally throw concussion grenades at unarmed people,” “the lack of charring of flesh at the wound site,” and “the grenade pieces that have been removed from her arm in surgery and will be saved for legal proceedings.”

In his press conference, Sheriff Kirchmeier didn’t mention the grenade, but instead claimed that protesters were throwing rocks, water bottles and burning logs at the police.

“The number one thing has still been safety...and some of the actions that were taken last night were just for that purpose alone,” said Kirchmeier, before adding that it was the safety of his officers that he was concerned about. “We’re just not going to let people and protesters in large groups come in and threaten officers. That’s not happening.”

As of now, the Dakota Access pipeline is 85% complete, according to one of the pipeline’s investors, Phillipps 66. But construction delays have cost the company behind the pipeline, Energy Transfer Partners, nearly $100 million.

Despite that, Kelcy Warren, CEO of Energy Transfer Partners has insisted that construction will go on. “If they want to stick around and continue to do what they’re doing, great, but we’re building the pipeline,” he told PBS last wednesday.

But that stubbornness has been mirrored by the Standing Rock Sioux. The tribe’s chairman, David Archambault Jr. II, has said that they too will not settle -- at least, not for anything less than stopping the pipeline outright.