Syrian refugee Bashar al Jaddou, center, is interviewed while sitting with his wife Maryam, second from left, and their children twins Maria, left, Hasan, center, and Mohammad word at their apartment in Dallas, Texas on Nov. 29, 2015.
LM Otero/AP
Citizenship

In 2017, the US resettled about one-third the number of refugees it resettled in 2016.

Why Global Citizens Should Care
The burden of the global refugee crisis has largely fallen on the countries who can least afford it, while the US, historically a world leader in refugee resettlement, appears to be shutting its doors as people fleeing human rights violations need the most help. You can join us by taking action here to call on world leaders to support refugees.

The world’s refugee population is on the rise, yet global resettlement numbers are on the decline, according to data from the United Nations Refugee Agency (UNHCR). And while several countries have reduced the numbers of refugees they have taken in over the past year, none has reduced its numbers as abruptly as the US.

In 2017, the US resettled just 33,000 refugees, the fewest its admitted since the Sept. 11 terrorists attacks in 2001 and approximately one-third of the total number of refugees it resettled in 2016, according to the Pew Research Center.

Take Action: Raise Your Voice for a World That Is Open, Equal and Fair. Call on Leaders to Adopt Global Compacts for Refugees and Migrants, Everywhere 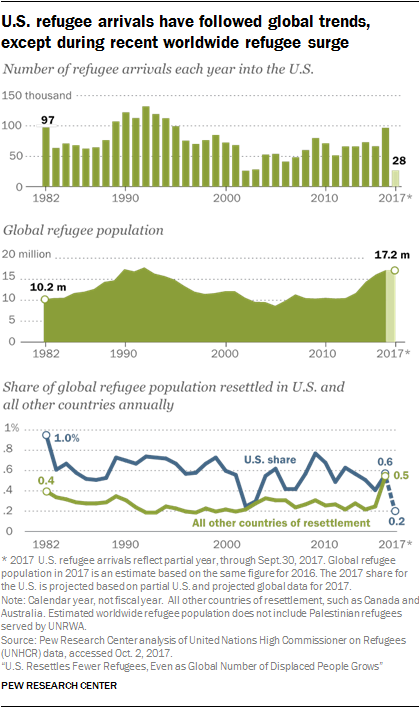 The drop in refugee resettlement to the US has affected Muslim refugees more than any other population. Despite rising numbers of Muslim refugees, largely displaced by violent conflict, just 17% of the 12,188 refugees the US admitted between October 2017 and April 2018 were Muslim, according to data from the US State Department. In previous years, the US had admitted Muslim and Christian refugees in approximately equal shares.

Resettlement to the US from countries like Syria, Somalia, and Yemen — the site of a worsening humanitarian crisis — has grown more complicated due to the Trump administration's “travel ban.”

Refugees make up about 30% of the 68.5 million people around the world who have been forced to flee their homes because of violence, persecution, or other rights violations. This includes those who are internally displaced in their home countries.

Read more: Here’s How Many Refugees the US Has Accepted in 2018

Unlike the immigrants and asylum seekers approaching the US-Mexico border, resettled refugees can only set foot in their new home country with legal authorization. The process to get that authorization and be officially resettled can take years, during which time many refugees remain in camps.

Since last October — the start of the 2018 fiscal year — the US has resettled more than 16,000 refugees, but with just three months in the fiscal year left, it’s on track to reach a historic low.