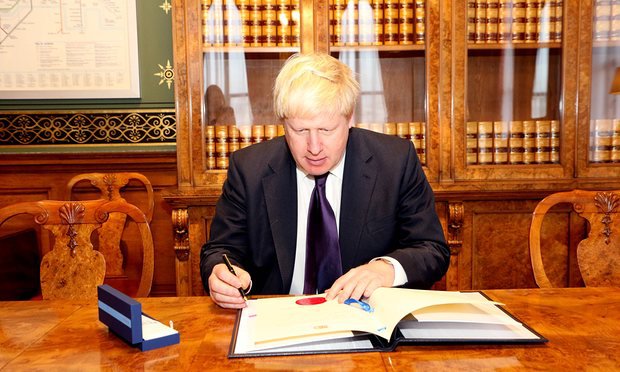 Crack open the fairtrade wine and ready the low-emissions fireworks, because we finally have something green to celebrate.

Yesterday, Boris Johnson finally signed the pact that passes the obligations of the Paris climate change agreement into law.

Great news for the world’s poorest people @nickhurdmp! A moment to take stock and celebrate - so we did! @BorisJohnson@UKinNewYork@COP22pic.twitter.com/eYvDvZaGNQ

There were no objections to the move raised in Parliament on Wednesday, and Johnson officially ratified the agreement the following day.

There were growing fears that the election of Donald Trump, who claims that climate change is a hoax invented by the Chinese, might negatively influence British environmental policy. However, a spokesperson for the government allayed fears with some words of comfort, stating that the US election would not affect UK climate change targets in any way.

Nick Hurd, the minister for Climate Change, celebrated the move. "The UK is ratifying the Paris Agreement so that we can help to accelerate global action on climate change and deliver on our commitments to create a safer, more prosperous future for us all,” he said. “I hope this will send a very strong message of continued international commitment to implement Paris, because it is obviously very important to send that signal out.”

However, it’s vital we do not become complacent. Since Theresa May has become Prime Minister, there have been some disappointing environmental setbacks. May overturned the decision to refuse planning permission to a fracking project in Lancashire, signalling support for the controversial method of mining shale gas in the future.

Meanwhile, she’s also approved plans to build a third runway at Heathrow, despite the hit to emissions targets such a decision will make. Aviation equates to 6% of the UK’s total CO2 emissions. A third runway at Heathrow will see that figure will rise to 24% by 2040. Despite campaign promises to press for a greener Britain, the government has scaled back solar and wind initiatives massively.

Read More: Which Countries Invest the Most in Renewable Energy?

Clearly, we must remain vigilant. Despite Johnson’s all-important signature, the curb on carbon emissions isn’t actually legally binding. It is only the framework for core objectives that must be kept. We can definitely celebrate the UK becoming the 111th country to officially ratify the most important global consensus on climate change in history. But we must stay on our toes. British politicians are answerable to us, and to us alone. It’s our responsibility to ensure we shout loud enough that they can hear us.