Proof that the pressure you place on leaders transforms lives.

It all started in August 2015, with Stephen Colbert eating a plate of lutefisk (Norwegian cheese) while listening to Norwegian death metal music and imploring Global Citizens to join him in a Twitter invasion targeted at the Scandinavian country’s prime minister, Erna Solberg. Yet the comedian wasn’t inciting a trolling session — it was a targeted effort coordinated with Global Citizen to get Norway to lead the world in investment in education.

Global Citizens had already tweeted, emailed, and called Prime Minister Solberg thousands of times, but the Twitter onslaught whipped up by Colbert was the final catalyst needed for a meeting between Global Citizen and the Norwegian government. As Erna Solberg said in her response video, in which she called upon governments around the world to step up and increase their funding to the same rate as Norway’s, “Thank you, Mr. Colbert. You clogged my Twitter feed. But you’ve got your priorities right — lutefisk, death metal, and girls’ education.”

Then, weeks later at the 2015 Global Citizen Festival, Norway reaffirmed its pledge to double its contribution to global education — including the Global Partnership for Education (GPE) — with Prime Minister Erna Solberg committing that Norway would achieve this over four years from when she took office. This pledge was again reaffirmed in July 2016, at the Girls Education Forum in London.

Since then, the Norwegian government has honored its commitment, doubling its annual contribution from NOK 290 million in 2014, to NOK 590 million in 2017. Indeed, despite being a smaller country whose currency value has dropped against the US dollar in recent years, Norway has punched above its weight, as the third-largest country donor to the GPE.

And according to a recent report from the Norwegian government that covers the years 2013-2016, the GPE has supported the construction or refurbishment of over 16,500 classrooms, the production of more than 78 million textbooks, and the training of 480,000 teachers during that time.

These are invaluable resources that, according to the GPE, are providing a brighter future for 15-year-old students like Otii Nelson Ochola and Eunice Abber Betty in South Sudan — a country where 400,000 children have been forced out of school due to conflict and only 1 in 10 children finish primary school.

But as Otii and and Eunice explain the video below, thanks to the contributions of organizations like GPE and UNICEF, "They are building schools, training teachers, and giving us books. They are keeping us safe and teaching us the basics so we can have a better life." 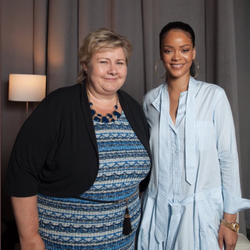 And it's a relationship that Rihanna has used to powerful effect — including last year, when she tweeted at G20 leaders on the fringes of the G20, where PM Solberg was an invited guest.

And if there's one thing Global Citizens know about Prime Minister Solberg, it's that she responds in a big way. Ahead of the G20, she took to Twitter to thank Rihanna for shining a light on the urgent need to address education financing with world leaders, adding that it was time for the G20 to deliver. 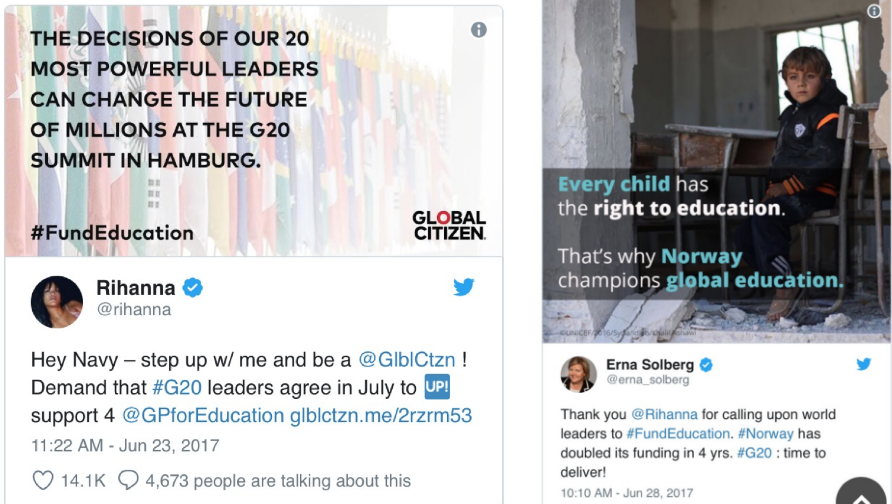 Earlier this year, Rihanna was at it again and tweeted directly at Solberg just a week before the GPE replenishment conference in Senegal, reminding her of their backstage conversation at the Global Citizen Festival and urging the Prime Minister to lead the way at the financing event. 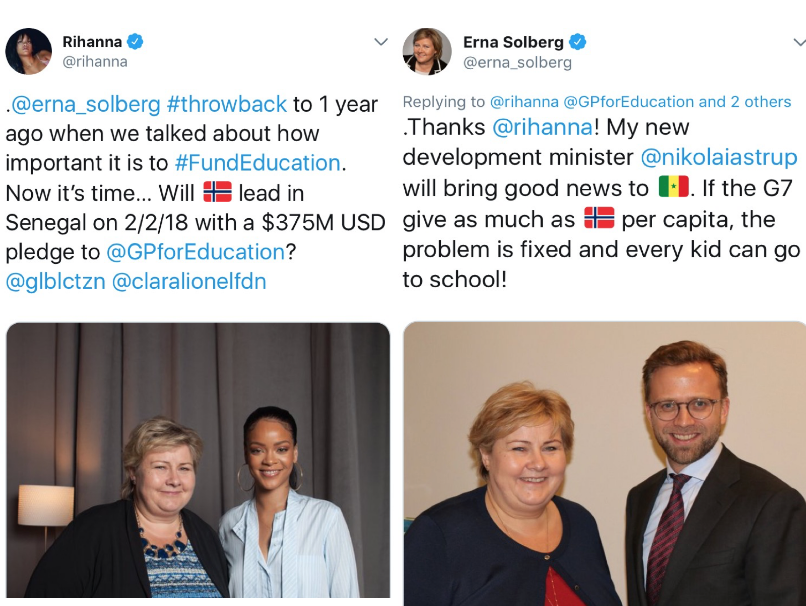 And lead the way she did. Norway was one of the key donors at this year’s $2.3B GPE replenishment, with Minister Nikolai Astrup contributing NOK 2 billion toward the Global Partnership for Education. This pledge helped boost the total contributions that could help bring education to around 700 million children.

Global Citizen looks forward to working with Erna Solberg on securing a quality education for all, even if, in the words of Colbert, Norway's cheese has a "fishy aftertaste."