These biodegradable bags might be what takes down plastic. 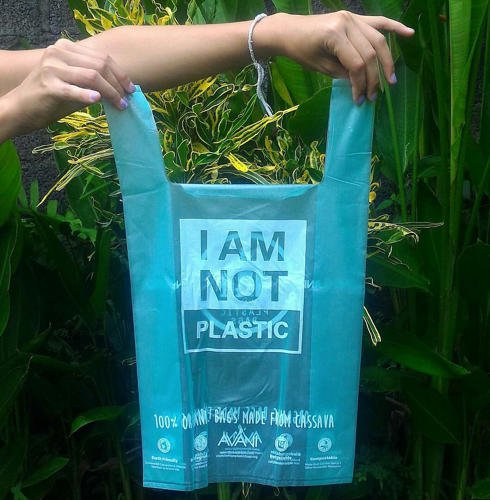 People around the world use and discard more than a trillion plastic bags each year. A significant percentage of these bags end up littered across ecosystems, especially oceans, where they converge in enormous gyres that disrupt and harm marine life. Many countries have recognized that the environmental costs of plastic bags are simply too much to pay for the convenience and have imposed bans or fees on their use.

China, for example, banned bags thinner than .025 millimeters in 2008 and annual plastic bag use dropped by 40 billion. Ireland, meanwhile, imposed a 15 cent fee on retailers for each plastic bag and use fell by 94%.

But these bans are the exception. Plastic bags still reign without interference all around the world and the amount of plastic waste generated is only rising.

Now, thanks to a company in Indonesia called Avani, an environmentally friendly solution could be coming to a store near you.

The team at Avani realized that most biodegradable bags on the market were misleading — they broke down into small pieces that were harmful to animals and contaminating to the water.

As the scientists at Avani worked to construct a truly sustainable and safe alternative, they landed upon the cassava root, which is native to the country. In a mixture with vegetable oil, Avani was able to develop bags that were legitimately biodegradable — they rapidly dissolved in warm water — and also safe for animals to eat.

Read More: Where Does the Plastic in Your Trash Go?

So if a bag made it into the water, a fish or turtle could munch on it and be nourished. Not only that, the team suggests that animals love the taste.

The bags are called “Eco Bags” and, ultimately, Avani wants to create a range of products to compete with and supplant plastic — takeout containers, disposable cups and plates, and so on.

“With the hustle and bustle of today’s lifestyle people tend to forget a lot,”  Kevin Kumala, co-founder of Avani told, Fast Coexist. “'Replace' becomes more of a convenient answer, especially if you’re now able to replace petroleum-based plastic with renewable resources which do not cost that much more in terms of its economical value."

Read More: These Edible Six Pack Rings Are Exactly What the World Needs More of

Avani isn’t the only company trying to create a world without plastic. For example, a company called Ecovative uses mushroom spores to create sturdy, yet biodegradable, packaging for shipping and storage. Ultimately, the company wants to eliminate plastic and even paper from the global supply chain.

And retailers, restaurants, and grocery stores are taking a stand on an individual level.

No-waste super markets and restaurants are popping up around the world, spreading the message of reduce, reuse, recycle, and encouraging people to bring these principles into their own lives.

Read More: Here’s How Sweden is Recycling 99% of its Waste

Plastic is so ubiquitous, cheap, and convenient that it’s hard to forget that it’s not just completely unnecessary, but it’s also environmentally disastrous.

“What is two cents more when you can help reduce the plastic waste that is currently occurring on our planet?,” Kumala told Fact Coexist.