The only sustainable solution is to shift away from plastic production. 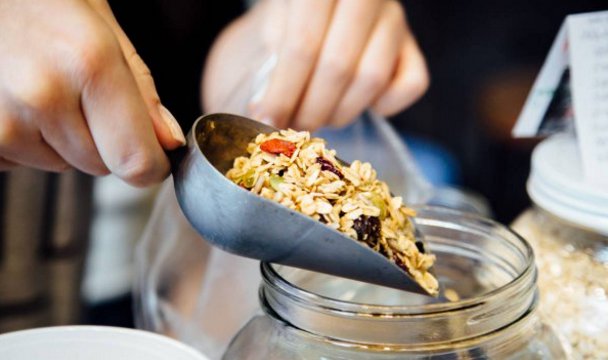 A new zero-waste grocery store is arriving in Copenhagen this summer to promote sustainability.

LØS Market will carry more than 400 organic products--nuts, cereals, vegetables, fruits, beverages, oils, etc.-- primarily sourced from local providers. Customers will be encouraged to bring their own containers to transport and store goods. For those without containers, the store will offer containers that can be cleaned and repurposed after initial use.

Zero-waste stores and restaurants are becoming more common as countries begin to recognize that plastic waste poses significant risks to the environment. Canada and Germany are two countries where the zero-waste trend is gaining momentum, and the growing network of farmers’ markets around the world is a clear sign of the movement’s viability--even if there’s a long way to go.

299 million tons of plastic was produced in 2013. Around 22 percent to 43 percent of that ended up in landfills.

10-20 million tons of plastic winds up in the oceans each year, which hold an estimated 5.25 trillion plastic particles overall. This plastic is regularly consumed by marine life that suffer health complications and die from accidental overconsumption. For instance, many marine animals starve to death because their stomachs become so filled with plastic particles that they can’t ingest food. Plastic also takes a long time to decompose and most plastic carries toxic additives such as colorants, flame retardants and “plasticizers” that leach into the water or inside organisms.

Recycling is an effective way to cut down on the hazards of plastic, but it’s only a short-term solution, because it doesn’t do much to address the overall production of plastic. Plus, recycling plastic can be a costly, resource-intensive procedure that can actually be detrimental to the environment.

The only sustainable solution is to shift away from plastic production.

Doing so will be extremely difficult--plastic seems to be used for everything.

Grocery stores--one of the biggest enablers of plastic production--are good places to start.

Zero-waste grocery stores cut down on plastic for food packaging. They also condition people to think beyond plastic and realize that plastic doesn’t have to be an integral part of the economy.

The convenience of plastic makes a lot of consumption careless. Removing plastic from everyday transactions will make people more aware of what they are consuming, potentially sparking more environmental awareness.

Another key aspect of this important issue is food waste. Approximately 1.3 billion tons of food are wasted each year. Most of this food is edible by the time it’s discarded and collectively it could end world hunger.

Food waste is also expensive. When you add up the costs of collecting food waste, transporting it and then maintaining landfills, a lot of money ends up getting spent. Plus, food waste is environmentally harmful because as it decomposes it releases greenhouse gases.

The good news is that countries around the world are responding to the illogic of food waste and citizens are embracing the changes.

France and Italy recently banned commercial food waste, calling on restaurants and grocery stores to instead give all leftover, edible food to charities. Denmark has fostered a growing food sustainability movement. Even corporate giants like Starbucks are joining the fight against food waste.

The Earth has finite resources that can replenish only so fast. For most of human history, this has never been a problem. But as the global population continues to grow and consume more, the planet’s resources and ecosystems are being depleted at ever faster rates.

In the years ahead, societies can only stay viable if they become sustainable and recognize that harmony has to be established with Earth.

If pouring wine into a reusable bottle after walking to the grocery is what it takes to achieve sustainability, then that’s not so bad.