This 26-Year-Old Political Newcomer Ran for Office, Lost, and Won’t Give Up

The biracial, veteran, mother of two admitted that her “biggest critics were women.” 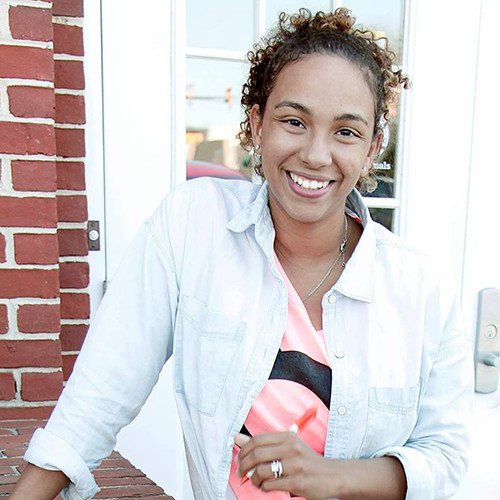 Around the world, fewer than one-quarter of lawmakers are women — an imbalance in representation that affects how laws are crafted and passed and how equality is created in societies. This year, Global Citizen’s new series, “Who Run The Gov? Girls!” will chronicle the massive uptick in women running for office, regardless of political party, in the US and around the world, highlighting the candidates and the groups helping them to run, the challenges they face, advice & tips for running, and the results.

Before every big event on the campaign trail, Alexis Frank — a candidate in South Carolina District Five’s recent election — would look down at the colorful bracelet one of her volunteers gave her and find solace in the words: “She believed she could, so she did.”

Up until the outcome of the 2016 election, the 26-year-old, biracial mother of two had never considered herself political.

“I had stayed up all night on election night until Hillary spoke and I was crying. I just couldn’t believe it,” Frank told Global Citizen. “That really changed something for me. I knew I had to get involved somehow but I wasn’t sure how.”

Shortly after the inauguration, Frank and her friends loaded up the car with signs and diaper bags, and headed towards the Women’s March in DC.

“I thought, ‘there’s no way I’m not marching,’” Frank said. “My daughter was in her carrier and she had a sign that I made that read: Mommy marches for me.” She carried Aliza, her ten-month-old, all day, periodically stopping to nurse her.

Then in late February, she came across a video made by 34-year-old freelance photographer, Frankie Norstad, that gave an overview of the special elections happening in the first half of 2017. South Carolina District Five was held by the Democratic Party until it flipped in 2010. At the time Frank found the video, not one Democratic candidate had entered the race.

“Find me that person and I will make sure their fees are covered,” said Norstad. The next day, she received an e-mail in her inbox from Frank.

“I felt something in my gut where I sensed an opportunity to really shake things up here,” Frank said. “That’s when I decided to go ahead and file.” 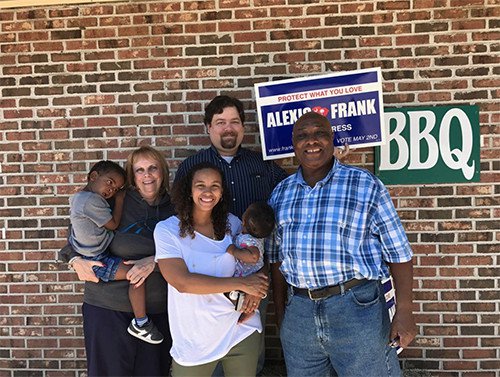 Frank would become one of the 16 candidates in the special election vying to replace Republican Mick Mulvaney, who was appointed by the current administration to be the director of the Office of Management and Budget.

For the next 64 days, the South Carolina native, who served in the Army for six years, would have to travel from Camp Lejeune in North Carolina, where her husband — an active-duty marine — was based, to District Five to campaign.

When Frank began her race, she was primarily alone.

Her headquarters was based out of a friend’s house. She never had a formal campaign manager and three weeks in, the campaign only had two paid staffers. The team raked in a few endorsements, including from the National Political Women’s Caucus, and managed to raise $40,000.

It was “the epitome of a grassroots effort,” she said.

There were times where her three-year-old, Avery, would sit on the side reading his Kindle Fire, while she would speak at events with Eliza in her arms.

“A lot of people admired what I was doing,” she said. “But there were also plenty of people who told me I didn’t have enough experience.”

Opponents in the race, she claimed, would criticize her youth. Upon first meeting Frank, some constituents would ask her how old she was or comment on how young she looked.

“No one would ever ask a male candidate that,” she said. 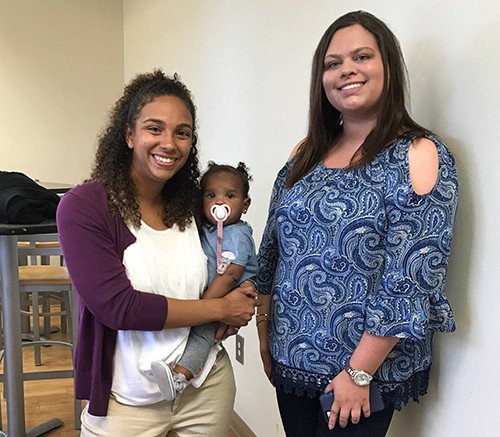 Read More: Each Time a Woman Runs for Office, This Is What She’s Up Against

The candidate was also frequently asked how she would balance the responsibilities of parenting and politics — another question, she said, that was never posed to her male counterparts, whether they were Republican, Democrat, or Independent.

“There were also some who made up stories saying I fabricated my entire enlistment or that my degrees weren’t legitimate because I have an online education,” Frank said. “That’s really disrespectful to people like me who have no other choice but to seek out an online education because there are no colleges in the area that I live.”

In a state that ranked dead last this year in the education category in US News & World Report’s inaugural ranking of all 50 states, Frank prioritized education on her platform.

“Most of the district is in rural, very remote areas,” she said. “A lot of schools suffer when students are parents leave to go to better school districts. And I thought ‘why are we now just investing in those rural schools?’”

After going door-to-door talking to constituents about their struggles with education, she developed a college affordability plan partially based off of Governor Andrew Cuomo’s and Senator Bernie Sanders’ Affordable College plan.

Read More: This Inspiring Teen is Running For City Council

“But not everyone wants to go to college,” she added. “So for those who don’t want to go, we need to make sure they have access to opportunities where they can learn new skills and proper training.”

By 9 p.m. on May 2, however, Frank  had lost the Democratic primary to Archie Parnell, another first-time-candidate and formerly an employee of Goldman Sachs and ExxonMobil.

“My biggest critics were women,” she said, “and that was difficult.”

The candidate wished she had had the time to seek support from one of the many organizations working to get women elected, among them: Emerge America, Run For Something, and Emily’s List, which have all seen huge increases in women looking to run for office since the election.

Frank plans on running again sometime in the future and has her eye on a few city council races near her husband’s base. But until then, she’ll be actively supporting other women working to enter the political arena, including a female candidate running for District Three in 2018 that, she said, doesn’t have “the same stances” as her.

“I have to try and continue to encourage people as much as I can,” Frank said determinedly. “For those who follow me on social media: stop being facebook warriors, get off of your computer screens and go make that change. Move it along. We need you.”