Emily’s List Wants a Woman to be President & Senator & Mayor

Emily’s List is one of dozens of groups trying to get women elected. 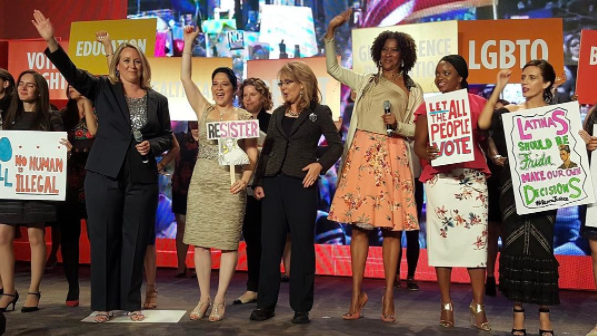 Around the world, fewer than one-quarter of lawmakers are women — an imbalance in representation that affects how laws are crafted and passed and how equality is created in societies. This year, Global Citizen’s new series, “Who Run The Gov? Girls!” will chronicle the massive uptick in women running for office, regardless of political party, in the US and around the world, highlighting the candidates and the groups helping them to run, the challenges they face, advice & tips for running, and the results.

These are just a handful of the leading female politicians of today, women who have served in the United States Senate and run for US president, and all of them have something in common: the backing of Emily’s List, a national political action committee that supports female candidates running for office around the country.

And in the past six months since the last US presidential election, more than 12,000 women have contacted the group for help launching their own political campaigns, a number that is about 12 times the number of women who usually ask Emily’s List for help running during a national election cycle, according to the group.

“I believe that one of the women in this room tonight will be our first woman president, and another will be our second,” Emily’s List president Stephanie Schriock told the 1,300 people gathered at the annual Emily’s List conference and gala in Washington, D.C., earlier this month. 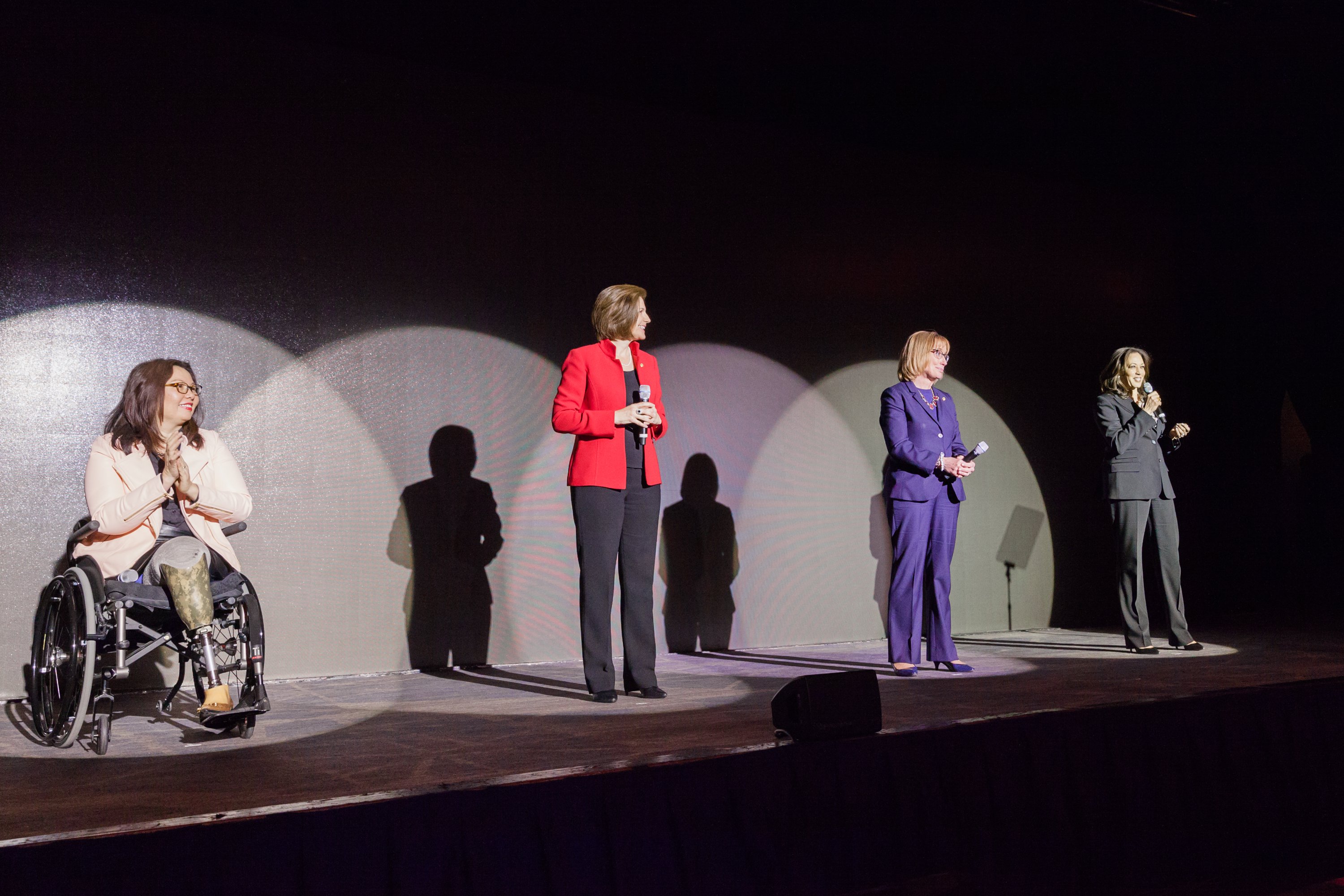 The conference brings together up-and-coming politicians and those at the top of the US government. This year’s theme, “Resist, Run, Win,” sums up how Emily’s List is reckoning with the defeat of Hillary Clinton and the election of Donald Trump (whose track record with women is less than stellar)  last year: by picking up, dusting off, and moving on toward more female victories in the future.

“You can’t imagine what you can’t see,” Oregon Gov. Kate Brown said at the conference, explaining that one effect of Clinton’s candidacy was just showing the country it can be done.

[Clinton’s] candidacy itself really was an inspiration to millions of women,” Schriock added. “Generations of women were inspired and energized by her. I can’t tell you how many little girls we ran into on campaign trail who said, ‘Does this mean I can run for president?’ And that’s so important.’”

The fact that their candidate lost in 2016 was also a moment of inspiration, though a tough one to accept, Schriock said.

“In the loss itself, there were so many women who said my voice needs to be heard, I’m going to take responsibility, I’m going to do something I never thought I’d do,” she said. “Those two things have been driving this energy of women across country.” 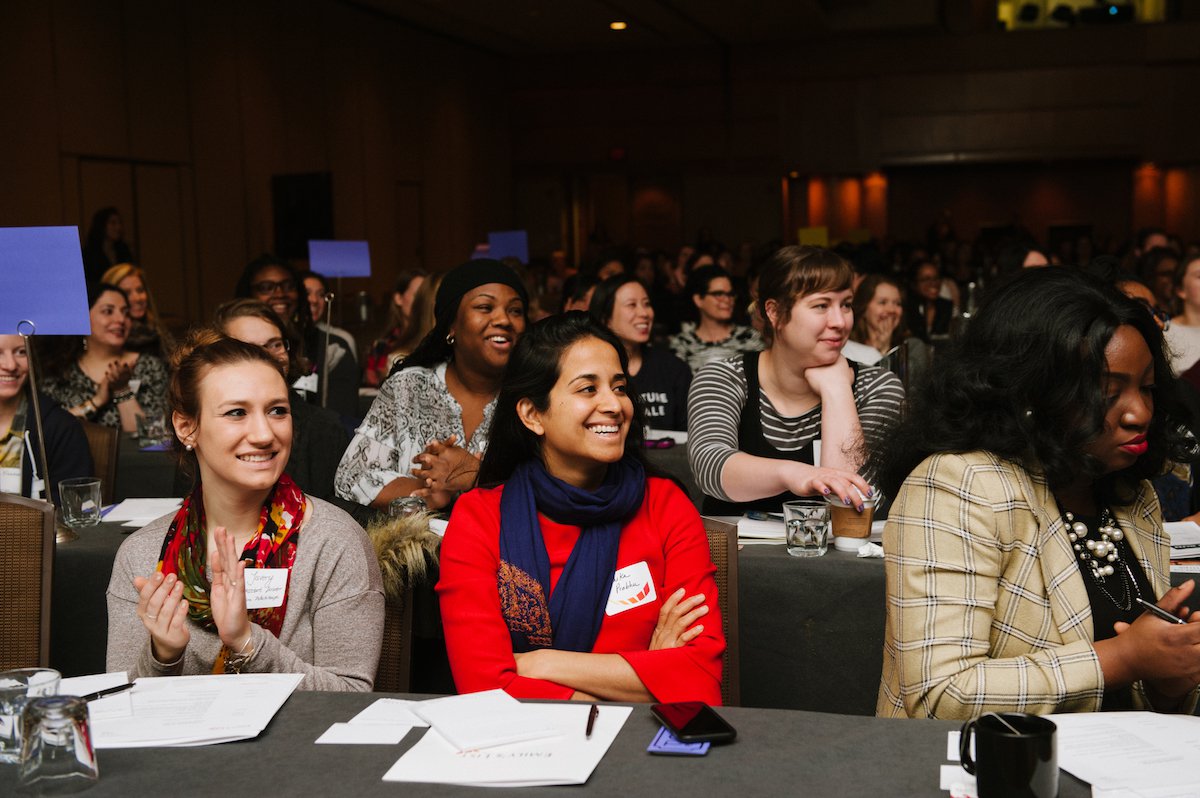 Women interested in running for office start their training at Emily's List's "Ready to Run" training.

The incredible uptick in the number of women who want to run means that Emily’s List will rapidly expand its operations this year and attempt to successfully train and support Democratic, pro-choice candidates toward victories in November of 2017 and November of 2018, launching thousands of new political careers that could increase the overall representation of women in office for decades.

“Traditionally, we haven’t had women come to us unprompted at these levels. Usually, we reach out to women and ask them, ‘Hey, would you run for office? What can we do to get you to that level?' This has been a pretty radical shift,” Alexandra De Luca, deputy press secretary at Emily’s List, told Global Citizen.

“This is really a grassroots march to elected office,” she said.

Leading that grassroots march, she said, are young women. At an Emily’s List’s training the day after the march, more than 60% of participants were under the age of 44 — and about 40% were women of color.

“That’s really important. Perception matters, and if there’s a perception that only one type of woman can get elected and it’s an older, rich white lady, that’s a problem. It’s also untrue – 40% of women we’ve helped elect to office are women of color. That representation is a critical reason why we’re seeing so many younger, diverse women come out,” De Luca said.

What an incredible group of women. 👊🏾Congratulations to IL Comptroller Susana Mendoza for receiving the #WeAreEMILY award at the 2017 EMILY's List gala. 💪🏼 #ResistRunWin ♥️💛

Many of these young women who are thinking about running will start off with local races, campaigning for spots on school boards, city councils, and county commissions; as they build their political careers, they could then run for state assemblies, congressional seats, Senate seats, and, of course, president.

The staffers from Emily’s List first work to convince interested women that they are qualified to run, that they can balance the demands of work and family life with governing, and that they can win. They help them transform from uncertain first-timers to polished candidates by working to hone their own personal stories and political messages to connect with voters. They also connect them to mentors —other women who are already in office and can coach them through challenges.

The group is hiring additional staff to help its state and local campaigns across the US to identify candidates they think can win and then supporting them with guidance, staffing, training, and materials.

The group provides a key ingredient to success that can be harder for female candidates to come by than their male counterparts: money.

Briar with a sign I picked up yesterday. #womensmarchonwashington #emilyslist

This election cycle, they’re going to double the amount they spend on local and state races, hoping that investing in lower-ballot races with a fresh crop of candidates now will build a deep bench of qualified, experienced female politicians who will run for higher office in the future, De Luca said.

They’ll also aim for higher-ballot races of national importance, hoping to fill Senate and Congressional seats with women in 2018 as well as elect more female governors across the country. They’ve already endorsed women running for governor in New Mexico and Michigan.

"With the way the last 100 days have gone, I can't imagine we'll ever elect a male president again." #weareemily #resistrunwin #nastywomenpersist #neverthelessshepersisted

All of the efforts are designed to get more women into seats who will work to craft laws that are fair to women.

At the Emily’s List conference, Oregon Gov. Kate Brown said that it was “critical that we have more women’s voices in leadership.”

“I got my start because of my experience as a lawyer,” she said. “I was paid substantially less than the man in the office next to mine, and so when I got the opportunity to go fight for that in the capitol I took it, and I’ve been fighting ever since.”

The outpouring of interest from women running for office is a special moment, Schriock and De Luca said, but they know it needs to be harnessed and sustained over the course of years to make a real difference in the makeup of American politics. Figuring out how best to capture the energy and enthusiasm that bubbled up on January 21, 2017 — the day of the Women’s Marches around the world — must only be the beginning.

“To every woman who marched,” Rep. Nancy Pelosi (D-CA), said at the gala that night, “I say, ‘You marched, now you must run. When women succeed, America succeeds.’”