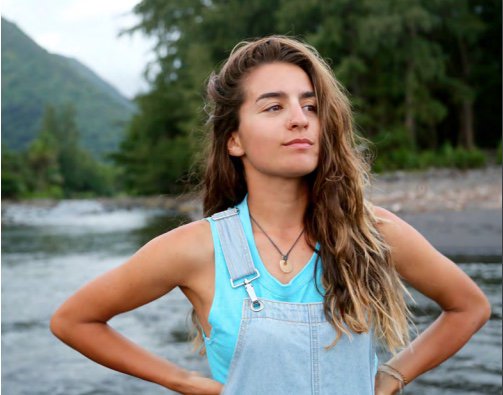 Madison Stewart, aka "Shark Girl," is probably one of a very few people who refer to sharks as "adorable." She grew up near the iconic Great Barrier Reef, which is where her love of sharks began from a very young age.

Now at the age of 24, this passionate Australian has been named Australian Geographic Society Young Conservationist of the Year.

Stewart loves to tell the story of her childhood where her dad wouldn’t let her ride a push bike because he thought it was too dangerous but he would take her snorkelling and diving with sharks all around the world.

Since beginning scuba diving at the age of 12 she has noticed a drastic decrease in shark populations. At the age of 16 she decided to dedicate her life to the preservation and protection of sharks and has been working tirelessly as an activist ever since.

In an interview with Wendy Harmer on ABC Mornings program, Stewart said, “Humans kill about 100 million sharks a year.

“[Sharks are] overfished in all regions of the world, which is really sad because of their importance as an apex predator in the eco-system.”

Read more: Why Everyone Needs to See the Ocean Documentary 'Blue'

She compares the shark fin trade to the illegal trade of rhino horn, which is more well known and publicised. Shark meat that is sold in Australia is often sourced from unregulated fisheries in places such as Indonesia.

To draw attention to this, Stewart often films undercover as a "dumb tourist" or under a false identity. She is trying to expose what’s going on behind closed doors in the fishing industry and to make people aware of it. Her hope is to educate consumers and show them what a difference they can make.

Her best piece of advice for consumers in Australia is to not buy "flake." This generic labelling is commonly used in fishmongers and fish and chip shops and is usually shark meat. Often consumers are told it is gummy shark, a slightly more sustainable variety and yet Stewart's own testing has revealed that the "flake" she is sold, varies between bull, tiger and other species of endangered shark.

Stewart is also an Ocean Guardian in the Australian documentary "Blue." In the film she visits an Indonesian fish market where she laments over the hundreds of sharks caught just for their fins, which are hacked off before the rest of the body is thrown back into the ocean.

She says being part of the cast for Blue was incredible as it is a documentary that finally tells the truth and doesn’t gloss over the darker side of things.

She says sharks are often misunderstood creatures, especially in Australia. She is working to fix that misconception and teach people to understand and respect sharks.

“They are always around, sharks don’t want to eat humans, if they did, we wouldn’t be able to swim, they would effectively hunt us.”

Shark Girl is a firm believer that just one person can make a difference.

“I’m passionate about speaking up for the environment for the oceans because it’s an absolute necessity everyone should be involved in.”

Global Citizen campaigns on the global goals and the protection of the world’s oceans and it’s marine life. You can take action here.