'Blue' Shows the Scariest Thing Lurking in Our Oceans—Plastic

A new movement hoping to save the world’s oceans 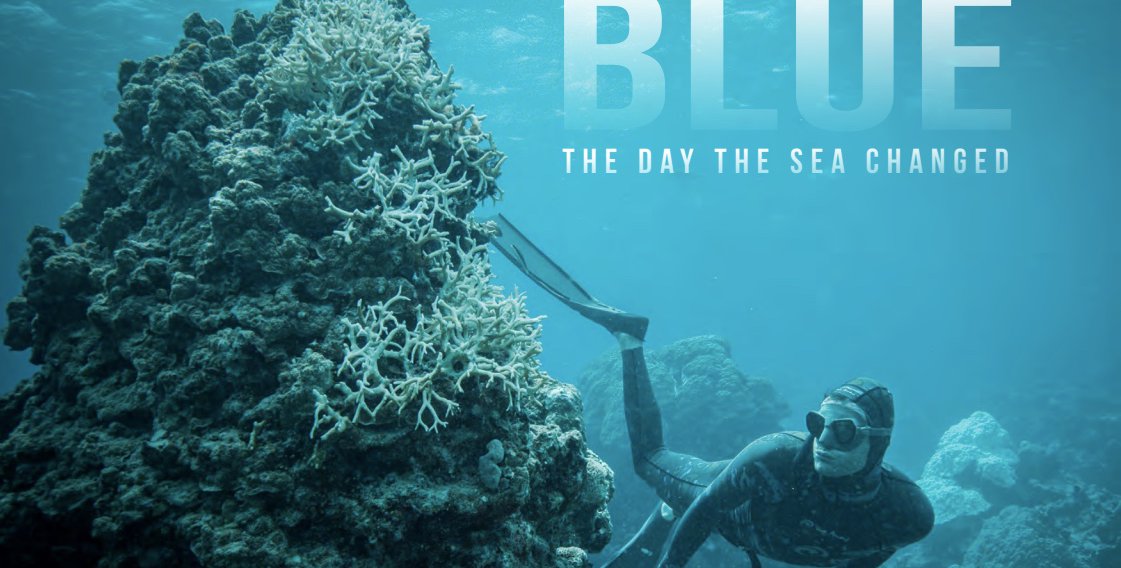 The film "Blue" opens with a stunning aerial shot of the deep blue expansive ocean. What lurks below? No, it’s not Jaws — it’s actually plastic. In fact it’s been estimated the amount of plastic will outnumber Jaws and his fishy friends in the ocean by 2050.

Yes, our ocean is under threat. And that’s why there has never been a more timely film than this.

"Blue" is a feature-length documentary by Northern Pictures, directed by Sydney film maker Karina Holden. Shot on location in Hawaii, Indonesia, the Philippines, and Australia over 35 days in 2016, the film is both beautiful and shockingly sad.

Blue Trailer from Blue The Film on Vimeo.

The film follows seven "Ocean Guardians" who are passionate and committed to saving the world’s oceans.

Freediver and marine biologist Lucas Handley opens the film with a remark that sets the tone for the film.

“No matter where you live on our planet you are connected to the sea. Yet in my lifetime half of all marine life has disappeared,” he says.

We also meet activist and conservationist Madison Stewart, aka "Shark Girl," who’s love for sharks developed from a very young age as she grew up on the Great Barrier Reef.

And then there’s Stewart’s idol, the one and only Valerie Taylor. Pioneering diver, conservationist and shark advocate, Taylor can personally testify to how the health of the ocean has drastically declined over the years.

“The marine world I knew, no young person will ever see it,” she laments over what has been lost.

Environmentalist, plastics campaigner and all round surfer dude Tim Silverwood from Take 3 is filmed wading through plastic waste you have to see to believe.

Marine eco-toxicologist and seabird expert Dr Jennifer Laver’s love and dedication of seabirds is infectious to anyone watching her work. In one instance she removes 275 pieces of plastic from the stomach of a shearwater chick.

The message? Never have our oceans and their marine life been in more danger. But this is not a doomsday film. Its message is exciting: We all have a chance to help turn the tide.

“It’s not an option to just despair and think this is too big for us to handle. We know we can create change because we’ve seen it happen. We want people to know they are citizens who can make a difference in the world,” director Karina Holden told Global Citizen.

When we asked Holden to name the biggest threat facing our oceans she couldn’t name a singular reason as there are so many. But the many threats, including overfishing, plastic pollution and a changing climate, all have something in common: human impact.

“The biggest issue for the oceans is that humans no longer see themselves as part of our natural systems. We have left the wilderness behind us for civilized society, and in doing so, untethered ourselves from the understanding that we only thrive and survive when nature does.” Holden said.

“Our fate on this planet is tied to what happens to the ocean.”

"Blue" is captivating, and while it can be heartbreaking, it is ultimately hopeful. The best thing about the film is the positive empowering message it leaves you with, that we can all do something, even simple and small, and have a positive impact. We can all become Ocean Guardians.

Holden says being an Ocean Guardian is about realising how our daily choices can impact marine life.

Good news from @GreenpeaceAP: #Greenseas will stop FAD use. 18,000+ GP supporters spoke up in under 2wks, together we CAN make a difference! pic.twitter.com/WPjxUkAh4y

“We need to understand every choice we make has a chain reaction. So if we create less waste, don’t eat fish all the time, read the labels, reduce our carbon footprint, don’t use single use plastics – these seemingly small things can make a critical difference.”

Global Citizen campaigns on the Global Goals including goal number 14 - the conservation of our oceans and marine life.

To become an Ocean Guardian, take action and start by pledging to ditch disposable take-away cups and bring your own reusable cup.

Sign up for Global Citizen Australian emails to be alerted of the next Ocean Guardian challenge.

Blue will be released in cinemas around Australia on 12 October 2017.