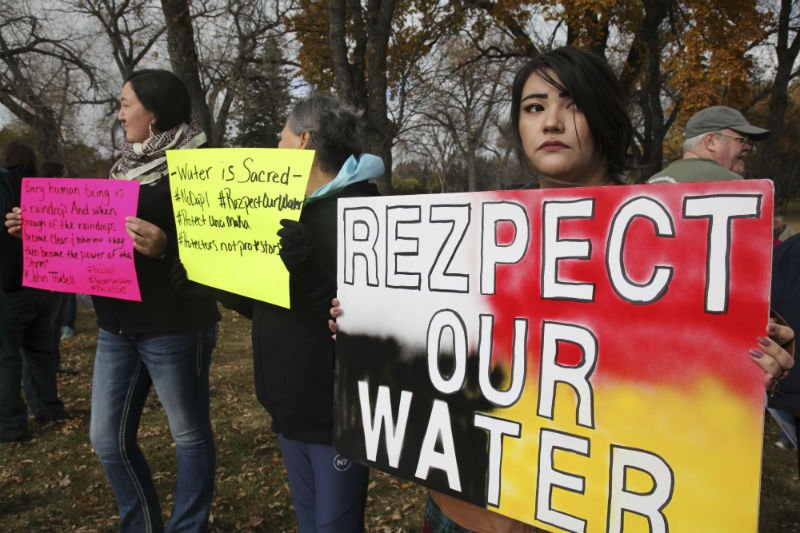 President Barack Obama has given a glimmer of hope to the hundreds of people who’ve spent the last four months protesting plans to run an oil pipeline through sacred burial lands and key water resources of the Standing Rock Sioux Tribe in North Dakota.

Obama announced that the Army Corps of Engineers, who was previously given the greenlight to move forward with building an oil pipeline from North Dakota to Illinois, is exploring alternative routes.

Since August, protests have risen from Native Americans, environmentalists, activists, and even politicians like Bernie Sanders to fend off the Dakota Access Pipeline, which runs from North Dakota to Illinois.

“I think that right now the Army Corps is examining whether there are ways to reroute this pipeline,” Obama said.

His words are not as clear as protesters would like, yet still hold hope that a peaceful solution to accommodate and preserve sacred tribal land for Standing Rock Sioux Tribe is possible.

“Disappointed in his willingness to "let it play out" and acting as if authorities & protestors are equally out of line,” shared Dory Edwards via Twitter.

@nowthisnews but thanks for saying something, @BarackObama.

He goes on in the interview with NowThis to say that his administration and the Army Corps of Engineers will spend “several more weeks” exploring other options to mediate the dispute over the current Dakota Pipeline route.

This is Obama’s first statement on the hot topic. The president also asked both sides of the debate to be peaceful and show restraint.

“I want to make sure that as everybody is exercising their constitutional rights to be heard that both sides are refraining from situations that might result in people being hurt,” says Obama.

Obama words come after the recent social media movement which saw more than 1 million people on Facebook to check-in to Standing Rock and show their support for protesters on the ground. The social action solidarity stunt revealed the garnered support that people hold in their hearts across the country for those fighting against the pipeline construction.

Which is a great change from less than a few months ago when hardly anyone was listening to the cries of the Standing Rock Sioux Tribe.

Read More: An Oil Pipeline, Ancient Native American Burial Grounds, and the Story Nobody Is Talking About

Together, his statements on the Army Corps plans, and request for peace act as an encouraging move forward for the ongoing onslaught on upsetting news of large scale arrests, and conflict between police and protesters.

From here, let’s hope the next news from the president is a resolution and new path for the Dakota Pipeline.