The "Divergent” star broadcast the arrest on Facebook, where it already has 1.5 million views. 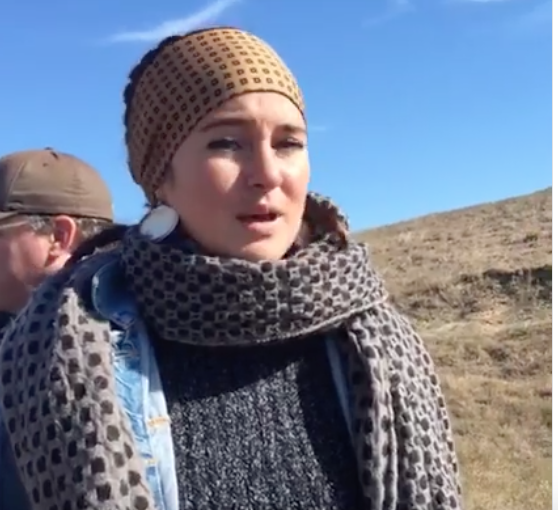 “Divergent” actress Shailene Woodley was arrested today at a protest against the Dakota Access Pipeline, an oil pipeline being constructed in North and South Dakota, Iowa, and Illinois.

Woodley was broadcasting her participation in the protest on Facebook Live when the arrest happened, and her mother kept the recording going as Woodley was led away by officers.

In the video, Woodley is seen walking away from the main group of protesters back toward a recreational vehicle with her mother and a smaller group. Heavily armed officers line either side of the roadway, and armored vehicles can be seen parked near her RV on the side of the road.

As she approaches, the officers seem to stop her.

“‘I was walking back to my RV and they grabbed me by my jacket and said I wasn’t allowed to continue and they have giant guns and batons and zip ties and aren’t letting me go,” Woodley tells the camera.

Eventually one of the officers says she is being placed under arrest for criminal trespassing, and when Woodley asks why only she is being arrested, and not the hundreds of other protesters at the pipeline sight, an officer responds, “you were identified.”

Read More: An Oil Pipeline, Ancient Native American Burial Grounds, and the Story Nobody Is Talking About

“It’s because I’m well-known, it’s because I have 40,000 people watching,” Woodley tells the camera. “So everybody knows, we were going to our vehicle and they were waiting for me with giant guns and a giant truck.”

As she is led away by the cops, she yells, “I hope you’re watching, mainstream media.”

Twenty-six other individuals were also arrested, according to E!

just landed back in the US after being overseas for 2 weeks to THIS horrifying news. America, wake the fuck up. this is atrocious. and it's no ones responsibility but OURS. yes, our government, our politicians, and our police force can act in corrupt manners, but it's because we haven't been holding them accountable. take notice of the brilliant work #blacklivesmatter is doing. and the resiliency #sacredstonecamp has garnered. across our nation, people are rising. standing tall and demanding a change. so let us join them. at all costs. to stand up in the face of corrupt adversity is the ONLY path to change. no one will do it if WE don't. let us not let photos like this pass us blindly. let us repost these images, talk about them, print them, send them to the White House and congress, call our representatives. and, above all else, let us pray for hearts to be opened and eyes to be broadened to see the underlying truth: we are all one. time is NOW. #UpToUs from @frankwaln - #NoDAPL: "This is what our Protectors face as they work to defend the water and land. This photo was taken today were law enforcement had shotguns and semi-automatic rifles aimed at our relatives AND had planes spraying tear gas above the crowd! Shits bananas. #NoDAPL #WaterIsLife #KeepItInTheGround" (via #InstaRepost @AppsKottage)

The protest came a day after a federal appeals court issued a ruling allowing construction on the pipeline to continue though the Justice Department continued to ban construction at one part of the pipeline.

The pipeline has become a hot-button issue for environmentalists, Native American tribes, and others in the Dakotas. The Standing Rock Sioux Tribe, which has land near the pipeline, filed a federal lawsuit this summer to stop construction on the pipe, arguing that it would endanger the tribe’s water source and sacred burial grounds.

The Justice Department is reviewing the tribe’s claims and the Army Corps of Engineers’ decision to greenlight the project.