And of course their first hit is about climate change. 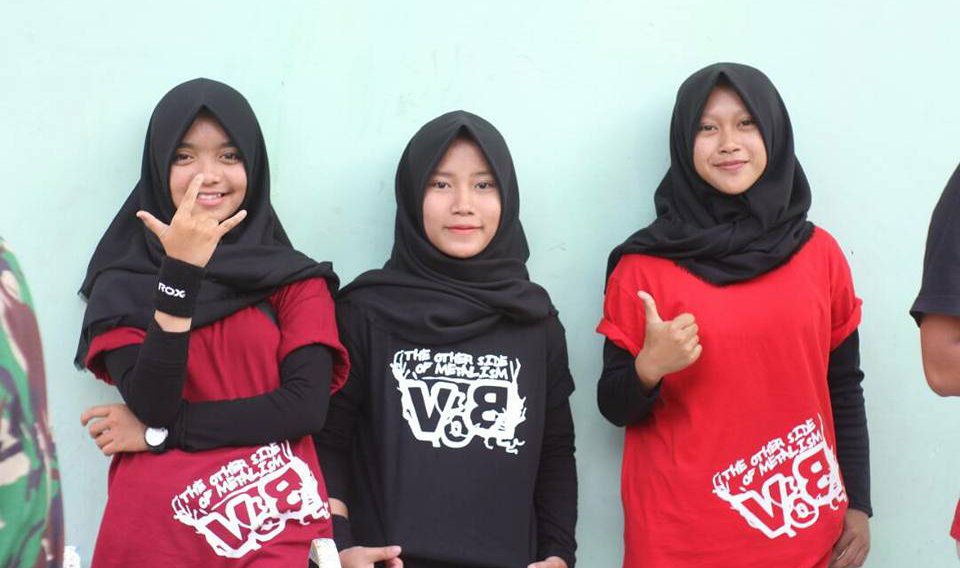 Heavy metal groups like Muse, System of a Down, Red Hot Chili Peppers, and Linkin Park are not the typical favorite bands of Muslim teenage girls in Indonesia.

But these are the chosen artists and inspiration for three badass teens of Voice of Baceprot, a hijab-wearing heavy metal band out of Garut, Indonesia, according to the group's Facebook page.

The band’s name means “noisy voice” and these girls are sticking true to their name. Their “hardcore” music, as one fan described to Reuters, is sending a message to other Muslim girls that using your voice is OK.

VoB’s mission is to show that women in hijabs can follow their beliefs and their religion while still following their dreams of being rockstars, according to a Facebook post from the band.

Take Action: Stand Up With Sonita Against Child Marriage

“I think gender equality should be supported, because I feel I am still exploring my creativity, while at the same time, not diminishing my obligations as a Muslim woman," lead guitarist and singer Firdda Kurnia told Reuters.

Kurnia, Widi Rahmawati (bass and vocals) and Euis Siti (drums) have been playing together for the past three years, since they were 13.

Their music includes screaming and is very loud which is “unusual” for Muslim girls in Garut, Muhammad Sholeh, a teacher in their community who is unsure the town is ready for their heavy metal music, told Reuters.

Yet despite some uncertainty from their community, the band have a growing global fanbase of 20,000 and currently play gigs throughout their home region of West Java. The girls have performed at school events, graduations, and local festivals.

Today, they play heavy metal covers from bands like Metallica and Pearl Jam, along with their own original songs about education and the environment, Reuters reports.

The band’s biggest hit, “The Enemy of the Earth Is You,” has been viewed over 668,000 times online. Contrary to stigmas that all metal songs preach sex, drugs, and vices, VoB’s viral hit is about climate change and environmental responsibility.

Read More: Why This Bollywood Film Has Become an Unexpected Top Hit in China

The band call themselves “‘three dangerous women’ (in a positive sense of course).” And for those who know just how potent empowered girls can be, these girls are most definitely a threat to outdated stigmas that women should remain quiet and demure.

In Indonesia, 90% of the country is Muslim. While most people practice “a moderate form of Islam,” Reuters reports, girls and women still face restrictions.

In 2015, the government passed 31 laws that discriminated against girls and women according to humanitarian group Human Rights Watch. Women entering the military must undergo “virginity tests,” and one in seven girls is married before 18.

Fortunately, there is no law against girls playing heavy metal.

"There's no law that bars hijab-wearing women from playing hardcore music,” VoB fan Teti Putriwulandari Sari told Reuters. “If a Muslim girl has a talent to play the drums or a guitar, should she not be allowed?