This Muslim Family-Owned Restaurant Offers Free Meals to the Hungry

There is no catch. Just kindness. 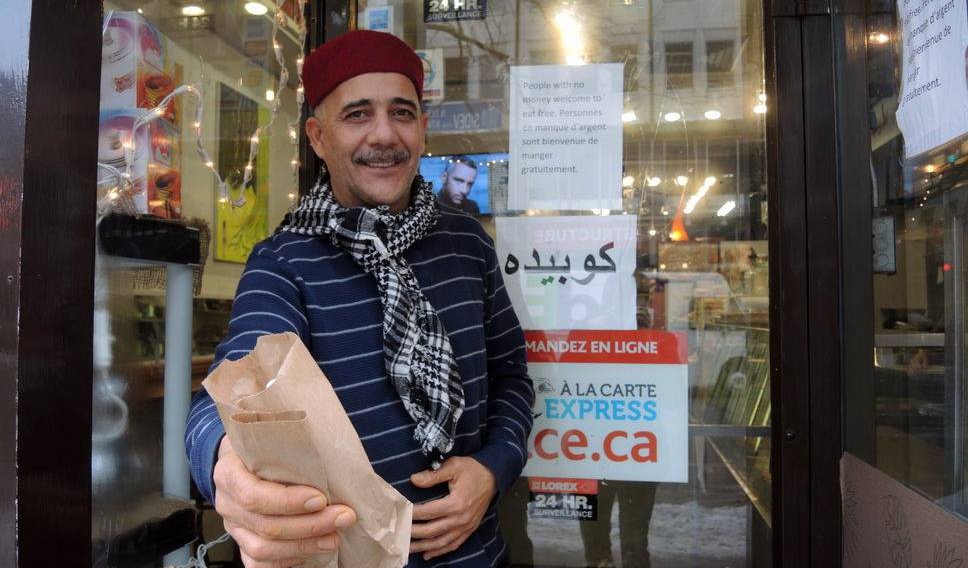 The holidays may be over, but for one restaurant in Montreal, the giving season continues year-round.

Marché Ferdous, a Muslim family-owned restaurant, began serving free meals to anyone who was hungry in the fall of 2016. There was no catch. The owners and chef simply decided no person should go hungry when food was being wasted at the end of the night.

“People sometimes come here, you have no idea by their look that they need the food and they're shy or they don't believe in such things. So we told the cook, ‘Don't ask any questions; do not judge them.’ If they ask, just give them the food, that's it, that's all,” co-owner Yahya Hashemi told CTV News.

So that’s exactly what Hashemi and his team did. They hung a sign on the door: “People with no money welcome to eat free.”

Marché Ferdous’ good deed went largely unnoticed until the sign caught a passing patron’s attention. Sean Jalbert, who could afford his meal, went into the restaurant to see what would happen if he asked for a free meal.

His hunger request was answered without judgment as Hashemi had stated was Marché Ferdous new policy.

“She didn't ask anything, but said, 'we welcome you and pick whatever you like,' including anything I wanted to drink,” Jalbert wrote in a post on Facebook.

Globally, one third of food is wasted. While this is a staggering obstacle to overcome, for the restaurant’s chef, saving food from ending up in landfills is “not a big deal.”

“It doesn't matter, because at night if you still have leftover food you end up throwing it out, so why not give to those in need? It's not a big deal,” said chef Abdelkader Bejaoui.

Hashemi also shared that his decision to give out free food stems from the tolerance and acceptance that he experienced as an immigrant coming from Iran to Canada.

“We have to reflect our real image of Islam and Muslim people, immigrants who want to work hard and participate in this great country to contribute in its economy and social tissue,” said the restaurant’s other co-owner Ala Amiry.

Marché Ferdous is not the only restaurant to offer free food to hungry patrons. Pay-as-you-feel cafes are popping up in Australia, the UK, and elsewhere in Canada. While there may be no catch to these restaurants, it’s important to remember that generous models such as these can only sustain feeding the hungry with a little help from those who are able to pay.

These types of people and places remind us that even in the chilly months ahead, there is always warmth to be found and ways to pay-it-forward.