The Hidden Truth About The Marshmallow Test

A new report reveals why rich kids are better at the marshmallow test.

Why Global CItizens Should Care

Educated and healthy children will lead their communities out of poverty and build the thriving nations of tomorrow. Global Citizen campaigns on the UN Global Goals, including ensuring inclusive quality education and lifelong learning opportunities for all. You can take action here.

The marshmallow test is arguably the most famous psychological experiment of the last few decades.

The 1960 test by Stanford psychologist Walter Mischel involves putting one marshmallow in front of a child before telling them they may have a second marshmallow if they wait 15 minutes without eating the first. Some children wait; others gobble down the marshmallow as soon as the supervisor leaves the room.

Decades later, the psychologists behind the experiment tracked the children down as adults and found that those who avoided the immediate temptation of eating the first marshmallow were on average more prosperous adults. The 1990 study concluded that "delayed satisfaction" in children indicated the likelihood of various significant benefits, including better standardized test scores, later in life.

Take Action: We Must Increase Funding for Education

A new study by Tyler Watts, Greg Duncan, and Hoanan Quen from New York University and the University of California, entitled ‘Revisiting the Marshmallow Test’, has complicated the original tests conclusions.

The researchers reinstated the experiment on a much larger sample of children - 900 as opposed to the original 90 - and included children of every race, ethnicity, and socioeconomic standing.

“We replicated the famous marshmallow study, which showed strong bivariate correlations between a child’s ability to delay gratification just before entering school and both adolescent achievement and socioemotional behaviors,” Watts stated. “Our results show that once background characteristics of the child and their environment are taken into account, differences in the ability to delay gratification do not necessarily translate into meaningful differences later in life."

Most significantly, the new study found the capacity to wait for a second marshmallow is shaped by whether the child comes from a poor or wealthy family - and that ultimately that environment, not the ability to delay indulgence, is what is behind a child's future success.

So, if wealthier backgrounds lead to more success, what does this really mean for children who grow up impoverished?

Financial advisor and investment writer J.D Roth believes growing up poor as a child leaves many with a “scarcity mindset”, which in turn leads to a variety of poor financial patterns as an adult.

“When you live with lack for a long time, it changes how you approach life. If you’re a kid whose family has struggled to get by, when you’re given a marshmallow, you’re going to eat it now. Can you really trust it’ll be there later — let alone that you’ll get the second one you’ve been promised?” he stated. “If you were poor as a kid, when you manage money as an adult, a scarcity mindset can lead you to do things like immediately spend a windfall instead of saving it for the future."

Research from the University of Chicago revealed that children from poorer families often have inferior reading and maths skills by the time they begin school. This gap in education is said to continue into adolescence and adulthood.

According to the research, the income-related gap in ability is largely due to the "level of investment" received by children with wealthy parents, as opposed to their poorer counterparts. Parents in the top 25% income bracket are 50% more likely to read to their children at least three times a week, compared to those from low socioeconomic backgrounds. Similarly, 6-year-old children from well to do families are more than twice as likely to attend extra-curricular activities and tutoring compared to those from poorer backgrounds. 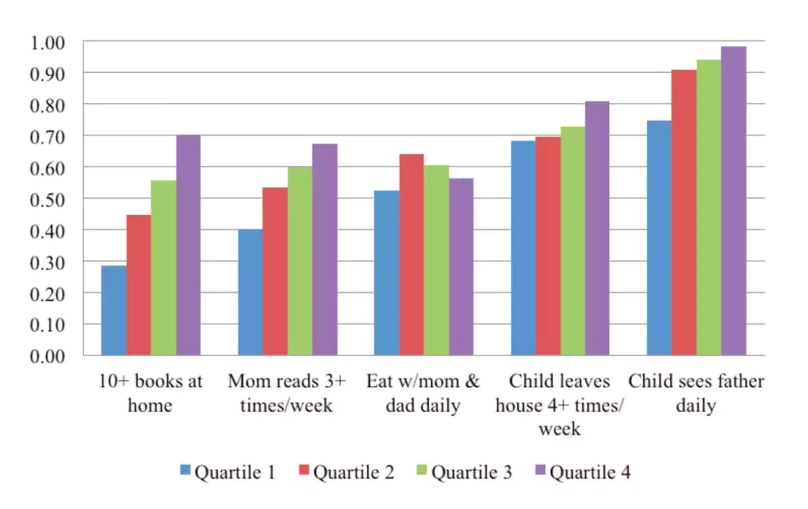 Data conducted by the University of Chicago.


Professor of economics at the University of Western Ontario Elizabeth Caucutt believes countries need to invest in policies that can help relieve the circumstances that inhibit poor families from investing in their children.

Caucutt further stated that the first step to minimise the knowledge gap between poor and wealthy children is to ensure low income parents are acutely aware of the significant educational benefits that come from reading to young children.

“By ensuring poorer families have access to financial resources and information about how important it is to make even modest and inexpensive investments in their children like a bedtime story, we can go a long way to shrinking this investment gap.”

There is nothing more vital for the future of humanity than increasing inclusive and equitable quality education and lifelong learning opportunities for all. Early investment is the best way to ensure the fate of children from poor families is not sealed before they even get to school.