A Majority of Americans Voted to Have a Female President

But the glass ceiling is still not broken. 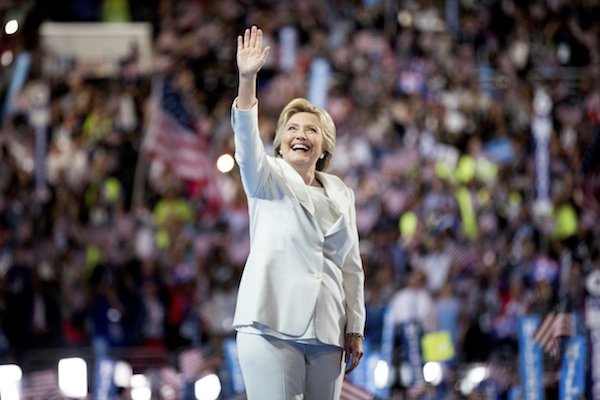 Hillary Clinton’s supporters stood beneath a glass ceiling in a convention center in New York City last night, watching as the political system that, just 100 years ago excluded women, determined whether she would become its next leader.

In the early hours of Wednesday morning, as votes from around the country were tallied, the results became clear:

Clinton lost the election to her Republican opponent Donald J. Trump and, instead, added her name to the history books as the woman who had come the closest yet to becoming the first female president of the United States.

The glass ceiling that has held women back from full participation in US politics will stay in place for at least four more years. The historical significance of Tuesday night’s election is just one more step on a path to the presidency has been hundreds of years in the making.

The fight for women’s inclusion in the political life of the US began nearly 200 years ago, in the decades leading up to the Civil War when voting rights first began to expand from wealthy male landowners to all white men. Soon, women and minorities began asking for the right to vote, too.

"Let's keep going, until every one of the 161 million women and girls across America has the opportunity she deserves." — Hillary Clinton

Following the Civil War, questions of citizenship occupied the nation. The right of all men to vote, and, in the 15th Amendment, the right of all black men to vote, urged female “suffragettes” like Susan B. Anthony and Elizabeth Cady Stanton to agitate for full participation in politics.

Although she couldn’t vote, Cady Stanton decided to seek office. She became the first woman to run for Congress in 1866. She received 24 of the 12,000 votes cast in New York State.

The results were grim, but the consequences of Cady Stanton’s run were far-reaching. A slow trickle of women began running for office, including one for president — Victoria Woodhull in 1872 — and victories slowly began accruing: three women were elected to the Colorado House of Representatives in 1894, and Jeanette Rankin of Montana was elected to Congress in 1916.

Read More: Hillary Clinton Has a New Plan to Help the Poorest Americans — But at What Cost?

Women finally won the right to vote in 1920, and as they did, the country became more willing to elect women to office.

But even then, a familiar pattern emerged. For the first half of the 20th century, almost all of the women elected to governorships or federal government had something in common: they succeeded their husbands, who had died while serving in office.

The 1960s loosened up the country’s resistance to female politicians: in 1966, the National Organization for Women was founded to fight for equality; in 1968, the first black woman, Shirley Chisholm, was elected to Congress; and in 1978, the first woman was elected to the Senate who didn’t follow in her husband’s footsteps, Nancy Landon Kassebaum.

Read More: Here's What the Electoral Map Would Look Like if Only Women Voted

When Geraldine Ferraro became the first person to run for vice president in 1984 with running mate Walter F. Mondale, Americans had to consider at the polls for the first time whether they could envision a female president.

Of course, Americans have watched women leaders around the world for decades — if not since its inception. Queens have ruled countries from ancient times, and more than 50 years ago, while the US was still contemplating female lawmakers, Sri Lanka elected the world’s first female prime minister, Sirimavo Bandaranaike.

In 1974, Isabel Perón became the president of Argentina, another female politician following in her husband's footsteps.

Last year, there were 27 female world leaders. And while President Obama has traveled the world meeting with German Chancellor Angela Merkel and Argentine President Cristina Fernandez de Kirchner, his home country had failed to elect a female leader of its own.

Prior to the election results on November 8, Clinton had already won more votes from Americans than all previous women running in major primary elections combined, according to PBS. And she became the first woman to receive the nomination from a major political party.

“When any barrier falls in America, for anyone, it clears the way for everyone. When there are no ceilings, the sky's the limit. So let's keep going, until every one of the 161 million women and girls across America has the opportunity she deserves,” she said at the time.

On Nov. 8, she received 59,323,530 votes from Americans, about 200,000 more than her opponent, winning the popular vote. More Americans decided on Tuesday that that this was the year America would grant full political representation to women than those who opposed it.

Still, the votes of the electoral college prevented Clinton from winning the election.

The glass ceiling at the Jacob Javits Convention Center in New York didn’t shatter on Tuesday night. And the country’s most visible political barrier to women stood intact.

Young girls growing up in the USA today watched as Hillary Clinton came within a few hundred thousand votes of becoming President of the United States this year.

“Now, I know we have still not shattered that highest and hardest glass ceiling. but some day, someone will and hopefully sooner than we might think right now,” she said.  “And to all the little girls who are watching this, never doubt that you are valuable and powerful and deserving of every chance and

​opportunity​ in the world to pursue and achieve your own dreams.​"​

Perhaps, in their lifetimes, those girls will see that final glass ceiling break, or be the ones to break it themselves.