If it wasn't already, Hamilton is becoming much more than a musical 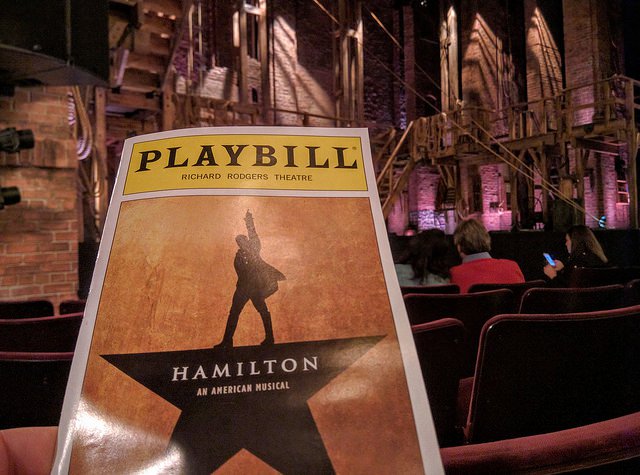 For the second time in three months, the smash Broadway hit Hamilton is serving as an engine of political activism.

Lin-Manuel Miranda, the creator and star of the show, just announced the winners of a Hamilton-themed contest, offering tickets and a backstage tour all in support of Planned Parenthood, which has once again come under attack from Republicans in the past few weeks.

Read More: Cecile Richards: 'Women's Need For Healthcare Is Not a Partisan Issue'

Every $10 donation to the Prizeo.com/Hamilton page in support of Planned Parenthood garnered 100 entries into the contest while larger donations could guarantee prizes ranging from Hamilton memorabilia to Lin Miranda autographs. Two grand prize winners -- who were called by Miranda personally -- received two tickets to see Hamilton in New York, Chicago, and San Francisco, including a backstage tour and pictures with the cast. Airfare and two nights in each hotel room are covered as well.

They let me call the @Prizeo winners again!https://t.co/gnJ9jVTM1h
You ALL raised a STAGGERING amount of money for @PPFA.
THANK YOU!

Miranda held an identical fundraiser last July in support of the Hispanic Federation, a non-profit that works to help Hispanic youth and families through grassroots activism, advocacy, and community engagement. That campaign raised over $2 million.

This latest contest joins a long list of celebrity-endorsed efforts for supporting Planned Parenthood. Among the organization’s most ardent supporters, Lena Dunham partnered with Planned Parenthood to launch a t-shirt campaign in 2014 and recently produced a short film titled 100 Years about the history of Planned Parenthood. Last year, Marc Jacobs created a pro-choice t-shirt of his own, co-designed by Marilyn Minter and featuring Miley Cyrus. On social media, Emma Watson is one of many stars who have tweeted with the #StandwithPP hashtag, specifically praising Miranda’s latest effort.

The wonderful @Lin_Manuel is fundraising for @PPact - a great way to #StandWithPP & win the chance to see Hamilton https://t.co/9JYiVBlHyO

Thanks to such wide support, Planned Parenthood acted as a “key partner” in the Women’s March on Washington and president Cecile Richards spoke on the main stage. Protecting reproductive rights was among the most pressing concerns for the millions of marchers who demonstrated in Washington and in “Sister Marches” all over the world.

Though Planned Parenthood offers countless other healthcare services to women (only 3% of the services they provide are abortion-related), the organization has been in conservative crosshairs for some time and faces defunding with a Republican-controlled Congress and Trump in the Oval Office.

Read More: Planned Parenthood: What Will Happen If Congress Slashes Its Funding

According to Planned Parenthood’s latest report, it received $553.7 million in government funding from 2014-2015, accounting for roughly half of its budget. It received $218.5 million in private donations. Needless to say, defunding the organization in addition to the possible repeal of the Affordable Care Act will have dire consequences on Americans’ access to healthcare.

In a CNN town hall a week before Inauguration Day, Speaker of the House Paul Ryan reiterated the Republican Party’s official stance on the issue: “We don’t want to commit taxpayer funding for abortion, and Planned Parenthood is the largest abortion provider.” Moderator Jake Tapper reminded Ryan that it is currently illegal to use federal funds for abortions. Nevertheless, Ryan maintained his position.

One of the cornerstones of the GOP platform is a "pro-life” stance on abortion. During a dizzying exchange with Chris Matthews while on the campaign trail last March, now-President Donald Trump went so far as to claim there should be some form of punishment for women who get abortions.

The last time Hamilton entered the political arena was in November. Mike Pence was in the audience, and Hamilton’s cast made a direct, and somewhat controversial plea to the Vice President and the incoming Trump Administration at large. After playing Vice President Aaron Burr and with the entire cast behind him, Brandon Victor Dixon claimed on-stage after the show that:

“We sir — we — are the diverse America who are alarmed and anxious that your new administration will not protect us, our planet, our children, our parents or defend us and uphold our inalienable rights. But we truly hope that this show has inspired you to uphold our American values and to work on behalf of all of us — all of us.”

Just in case the message wasn’t truly heard, Lin-Manuel Miranda is now taking matters into his own hands.

His musical has been a symbol of a progressive America, inspiring scores of people around the country to celebrate diversity. But he’s not content to sit back and let people read meanings into his play. His latest effort is more than just a rallying cry to be shared on social media. It will bring about actual tangible results in the nation’s ongoing healthcare debate.