“Your body, your house, you decide.” 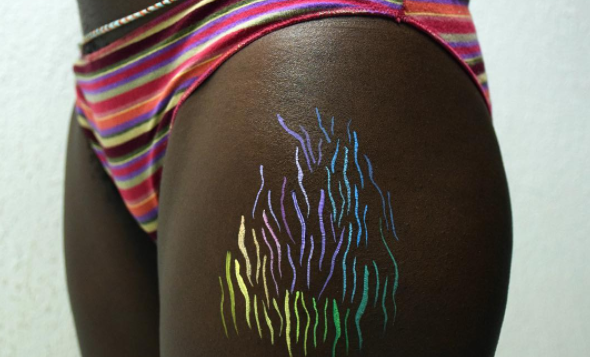 Stretch marks and period stains are not typically considered beautiful in our society.

But this artist has made it her mission to show that these so-called “flaws” of the female body are things to be proud of.

Cinta Tort Cartro, a 21-year-old artist from Barcelona also known as Zinteta, is using her Instagram page to spread body-positive messaging online, and it’s hitting off in a big way.

We spoke to Cartro to find out what’s behind the paintings that are stripping away the stigma of women’s bodies.

Global Citizen campaigns to achieve the Global Goals, including Global Goal No. 5 on gender equality. You can take action here.

“One day I started to think about the possibility of using the female skin as a new canvas. I painted my own stretch marks, and that was the beginning of the project,” said Cartro.

“It’s political for me in that it shows my opinion, and the things that I think must be changed. I think that it’s important that artists express all that they are feeling. I work with the body, and with aesthetic pressure, because I have something to say about that.”

It’s an important conversation to have, and to keep having.

Just last month, a report found that taboos around menstruation and vaginal bleeding are costing women and girls in developing countries their lives.

In parts of Nepal, women are made to sleep in sheds and outbuildings when they have their periods; a practice that has resulted in the deaths of at least two girls in under a year.

But other reasons that women experience vaginal bleeding – for example, post-partum haemorrhages, miscarriages, or cervical cancer – also go untreated because of misinformation, embarrassment, shame, and taboo.

It seems Cartro has found a way to express something that a lot of women want to talk about, because her paintings have found a big following online – with more than 52.8k on Instagram.

Cartro uses the captions for her images to express beautiful sentiments about women’s bodies that put body shamers, well, to shame.

“There are people with more or fewer stretch marks, with thick stretch marks, thinner, or more or less marked, and in this, in the diversity, there are riches.”

One another, she wrote: “More self-love and less aesthetic pressure. Your body, your house, you decide.”

As well as painting women’s stretch marks, Cartro uses paints and glitter to create “period stains” on underwear and tampons, as part of a project called “Mancho y no me doy asco” – meaning “I stain and I’m not disgusted.”

She told us: “I think that art is a way to be expressive and to communicate all that you’re feeling. It’s a personal project, but it’s an important personal project because I’m learning about me and about other people. Inspiring women to change how they see their bodies is amazing.”

She added: “The mutual support is growing and it’s really beautiful.”