Brought to you by: International Justice Mission

Sadhna, who was trapped working in a brothel in Kolkata aged 14.
International Justice Mission
Demand Equity

Sadhna thought she would be helping with housework, until she was drugged and raped.

Brought to you by: International Justice Mission

Sadhna used to love to fish. Her father would always be waiting for her when she got home, with the oven burning and ready to cook the family meal.

“I used to cuddle up beside him as he’d clean and cook the fish so we could have a meal together,” she says, telling her story to anti-slavery organisation International Justice Mission. “I miss the wonderful time we had in the village.”

Sadha and IJM shared her interview and story with Global Citizen. As Sadha looks back at her childhood, she recalls a time when she says she wasn’t afraid of anything.

Brilliant green rice paddies surrounded her family’s small home as far as she could see, and the narrow pathways of her village were shaded by mango, tamarind and coconut trees. When the landowner fell asleep, Sadhna and her friends would shin up the tree and steal the fruit.

As beautiful as these memories remain, however, Sadhna knows her childhood was far from idyllic. She says soberly, “For as long as I can remember, there were problems in my family.”

Her parents were gone most of the time. Most days, they travelled two hours by bus to work in Kolkata; her mother as a housekeeper and her father as a rickshaw driver. They struggled to make ends meet and argued constantly about the family’s poverty.

Each morning, as Sadhna and her friends walked to school, she felt guilty she wasn’t helping more. She remembers, “While I ate my lunch, I always wondered whether my mother and little sister at home had anything to eat.”

But then, in 2010, Sadhna’s family was changed forever: her father died, and Sadhna was left holding everything together.

Read more: This Man Has Saved Over 2,500 Children From Human Trafficking in India

At just 11 years old, she had to perform the Hindu funeral rituals and start contributing to the family’s upkeep. She sold frayed coconut husks as a packing material, earning just 30 rupees (around 50 cents) a week, but it was never enough. 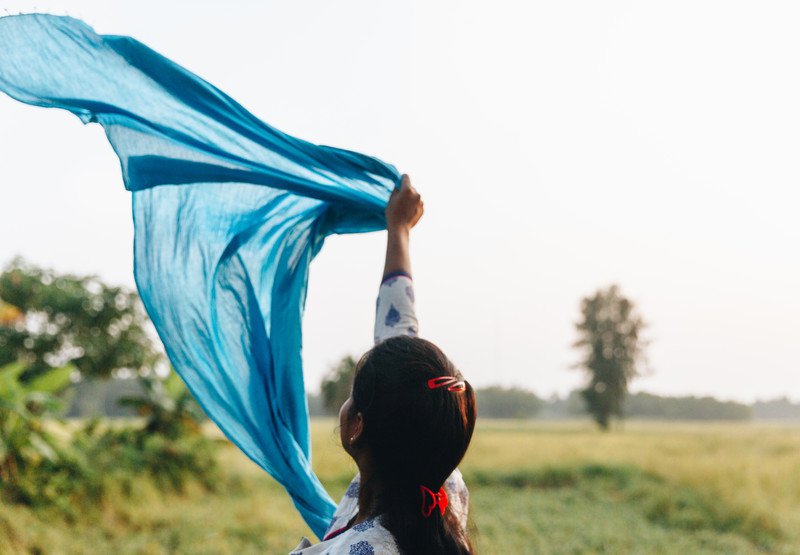 Sadhna was a fun-loving, confident child. But her life changed forever after her father's death.
Image: International Justice Mission

“I felt like I was left all alone to take care of my family,” Sadhna says. “At age 12 or 13, a girl dreams of her future and her studies, but I couldn’t afford to do that. I would always think how to protect my family or educate my younger sister and take care of my mother.”

She adds: “I broke down at times, but I didn’t let my mother take notice of that.”

Before long, Sadhna’s family packed up their small hut and went to Kolkata, seeking new opportunities and, once there, both Sadhna and her mother began working 12-hour days as housekeepers.

She stuck it out for three long years, before Sadhna began asking friends to help her find a better job. A girl in the neighbourhood put her in touch with a woman looking for house help, and Sadhna, now 14, went to meet her.

They met in an ordinary house, in an ordinary neighbourhood in Kolkata. The woman led Sadhna inside, and into a room full of strange men, beer bottles, and crushed cigarette packets.

“The lady told me not to worry, as I would get a nice job where I would be able to earn a lot of money,” she remembers—though she knew something was off. “I didn’t like the atmosphere, and I asked them to let me leave. They told me to sit and have a glass of water…I don’t remember anything after drinking the water.”

Sadhna woke up hours later on the floor—disoriented, naked, and afraid. Her clothes were strewn everywhere. She quickly learned that she had been raped, that this apartment was operating as a private brothel, and that she was now their property. She began to cry.

“The lady threatened to expose me to my family and my villagers. She said she knew everything about me,” Sadhna remembers shakily. She begged to leave until the madam relented—instead agreeing to call her back whenever a customer wanted sex. “She told me that two men would be following me, and if I tried to contact anyone she would get my mother and sister killed.”

Read more: The 9 Warning Signs that Modern Slaves Are Hidden in Plain Sight

Terrified, Sadhna told her mother she had found a well-paying job as a housekeeper and hurriedly convinced them to move back to their village. For the next two months, she slept at home and traveled one hour back and forth to Kolkata.

At the house, Sadhna and two or three other girls she never saw would be sold for sex several times a day in three tiny rooms — “not even big enough for a single bed” — hidden from anyone passing by the house. She says: “Those people were constantly calling me up and threatening me of dire consequences if I didn’t turn up. They even sent men to follow me. I had no other option but to go back to them.

And private brothels like this have been growing more and more popular in Kolkata in recent years.

They are based in unassuming houses or apartments, where pimps and madams arrange private meetings between customers and the girls through secret networks, according to International Justice Mission. They are more hidden than traditional brothels in red-light districts, but they exploit young girls just the same.

“She used to take money from the customers in front of me, and I had to go with them even if I didn’t want to,” Sadhna continues. “The customers who visited me at that house didn’t behave very nicely with me. They were so bad I can’t even discuss it now…I felt worthless and couldn’t see any way out of it.”

Event though Sadhna wasn’t physically restrained, she was still trapped. Threats kept her bound by fear, too scared to run. While the stigma placed on a young girl who has lost her virginity made her too ashamed to tell anyone.

“I struggled with myself constantly,” she remembers. “I didn’t know if I could ever come out of this trap and live a normal girl’s life. I had lost all hope of getting out. I felt as if I had no hope left in life and had become a worthless human being.”

The experience changed her. “After that incident, I stopped laughing or mixing with others,” she continues. “I felt totally isolated from girls like me. I realized I had wasted my life and could never be one of them. I felt as if it was the end of the road for me.”

It was on January 8, 2013, that the police finally arrived. Sadhna was with a customer in one of the tiny rooms when officers raided the house. Police and staff from International Justice Mission had been investigating the brothel for weeks, documenting the abuse that Sadhna and another young woman had been suffering — and they were here to rescue them.

As the customer fled outside, Sadhna listened to the raid. She heard the madam frantically begging not to be arrested, terrified of anyone finding out she had been running a brothel.

Sadhna gave her statement to the police, and was taken to a shelter. But it was clear the two months of exploitation she had suffered had taken their toll. Gone was the playful mischief, gone was the energetic smile and carefree spirit.

“I’ll never be able to trust anyone in life again,” she remembers thinking when she was first rescued. “This has shocked me beyond imagination. I stopped caring about anything in life. I had faced the worst experience of my life and didn’t bother anymore about anything else."

But, after meeting other survivors like herself at the shelter, Sadhna began to open up, and, slowly, return to the fun-loving girl she had been.

“I found out that some of the girls had to go through a tougher time than me in the past,” she remembers. “In spite of these difficulties, they were trying to turn around and do something worthwhile in life. That pushed me to think positively about the future of my own. They motivated me to start going to school, to look ahead in life and to forget the past like they did.”

Sadhan was able to re-start her education, and to rebuild her self-esteem. She rediscovered her talent for music and dancing, and learned how to manage her feelings of fear and anxiety.

To close this painful chapter of her life, Sadhna knew she would have to see the madam held accountable for her crimes.

“I was scared of going to the court in the beginning, but the aunties from the shelter encouraged me to testify,” she says. “I felt by testifying in court I could save the life of another girl like me who would be a victim if this lady got away without a trial.”

Now, aged 19, Sadhna is once again confident and vibrant. She loves maths, and computers, watching horror films, and practicing traditional Hindi dance. Her younger sister has also been living in the shelter with Sadhna since late 2016, and Sadhna hopes to be able to support her sister, so she will never have to live through the same exploitation.

“My dream is to complete my education and get a job as a social worker, to hear the stories of other girls and help them,” she says. “I was quite fearless in my childhood days. Through this phase of life, I started getting scared of people around me. Now I’ve learned to draw inspiration for these experiences and have become fearless again. I’m no longer scared of anything in life.”

Global Citizen campaigns to achieve the UN's Global Goals, which include action on ending modern slavery and combatting child labour. You can join us by taking action here to help put an end to the exploitation of children around the world by supporting access to universal education, and by supporting the rights of women and girls.

International Justice Mission is the world’s largest international anti-slavery organisation. It works in partnership with local authorities to find and rescue victims of slavery and violence, to restore survivors and to bring perpetrators to justice. Learn more about IJM here for the UK website, and here for the US website.