By James Hitchings-Hales  and  Jackie Marchildon

Global Citizen brought a bunch of experts to NYC — and what they said will motivate you to go big.

By James Hitchings-Hales  and  Jackie Marchildon

How do you change the world?

You start by bringing it together. Every corner must be pinched, every idea must be shared. Movements set sail with momentum, and are steered by expertise — or, if you’re just starting out, with enough passion to rock the boat.

Global Citizen has brought our very own movement of millions to New York this week for an activism takeover — debates and shows from the world’s brightest and loudest culminating in this weekend’s Global Citizen Festival in Central Park with Stevie Wonder, Green Day, The Killers and more.

Manhattan is alive with activism right now. But the question still stands, unanswered and immovable. How do you even begin to change the world? How can you turn feminism into the Women’s March?

Don’t ask us. Ask these guys. On Tuesday, Sept. 19, Global Citizen, with support from Citi Foundation, CHIME FOR CHANGE and Johnson & Johnson brought together dozens of the world’s leading voices in art, politics, journalism and business — from every space across the spectrum — to talk about how make a movement.

Bob Bland, Co-Founder and Co-Chair of the Women’s March

Nine months ago, Bland didn’t even call herself an activist. But then she led a march of over 5 million people across all seven continents. How? She says it’s about momentum: overnight success is a potential reality with social media — it just needs a really good idea, and hard work.

Women’s March demonstrated that activists as organisers are a much more mainstream group than what we previously thought.

Co-founder of the @WomensMarch, @bobblanddesign, tells #GCMM that momentum is everything. A powerful movement can transform overnight. pic.twitter.com/IvdR7zGHAj

Michael Klosson, Vice President of Policy and Humanitarian Response at Save the Children

Klosson spoke on a panel about partnership with representatives from GirlUp, Johhnson & Johnson, and the UN Foundation. The point was simple: global issues require an international consensus. Klosson quoted an old African proverb to emphasise how important it is that the world works together.

Davis, a blues artist, has spent the last 30 years befriending members of the Klu Klux Klan — and persuading hundreds to give up their robes. He shared his fascinating experiences of approaching men automatically hostile to the colour of his skin.

When two enemies are talking, they’re not fighting… It’s when the talking ceases that the ground becomes fertile for violence.

"When enemies are talking they're not fighting," says Daryl Davis. "It's when talking ceases that there's fertile ground for violence" #GCMMpic.twitter.com/4Sp2ffnLJG

Some call her the Syrian Malala. Muzoon is the youngest ever UNICEF Goodwill Ambassador and is an all-round badass education activist.

Education is the only thing which helps us and gives us the strength to face the challenges and also to rebuild our country again.

Sophie Trudeau has won hearts and minds all over the world with her very public fight for gender equality and to achieve the Global Goals. At tonight’s event, she opened her speech with this quote from Gloria Steinem. She’s also the spouse of Canadian Prime Minister Justin Trudeau.

When human beings are linked instead of ranked, everybody wins.

"It is said that the hardest thing to change in society is what is considered is normal... Let's redefine normal." #sophiegregoiretrudeaupic.twitter.com/d2J9IyEUqC

Pritchard has fought for gender equality to play an important role in marketing products used by billions. Approximately 75% of women and children think it’s the role of a woman to wash clothes, but by advertising to #ShareTheLoad, he has begun work on deconstructing social norms.

Find your passion and be useful.

"Companies can be a force for good & a force for growth," says Marc Pritchard from @ProcterGamble, talking about gender equality ⭕️ #GCWeekpic.twitter.com/fKdhJUchjX

Arianna Huffington, founder of HuffPost and CEO of Thrive Global

Huffington was speaking to Marc Pritchard about ambition — she commented that the Sustainable Development Goals are an important framework to lay out the future for the human race.

Without a bold goal there isn’t fundamental change.

Parker is one of the most successful tech entrepreneurs ever. Now on the Global Citizen board, he shared thoughts on how to bring a digital revolution to the real world with our CEO Hugh Evans.

We have to get that online enthusiasm… to translate into the offline world. 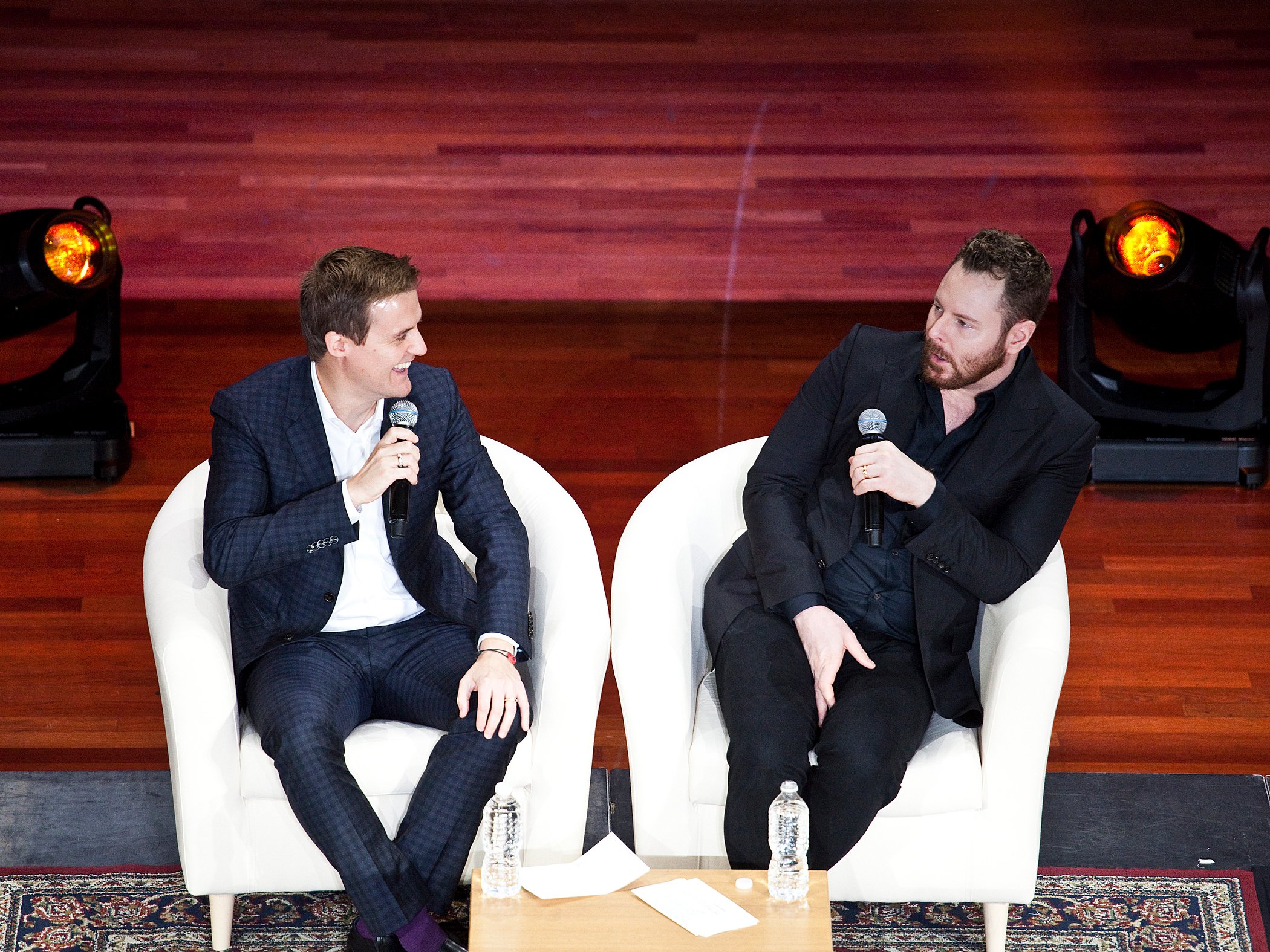 Blow has written a column for the New York Times for nearly a decade, and today moderated a panel for us including Congresswoman Barbara Lee on how to seize a moment to make a movement.

Whether or not you believe in a system, you still live in it. So either you can be oppressed by the laws or you can have a say in what those laws are and possibly change them. 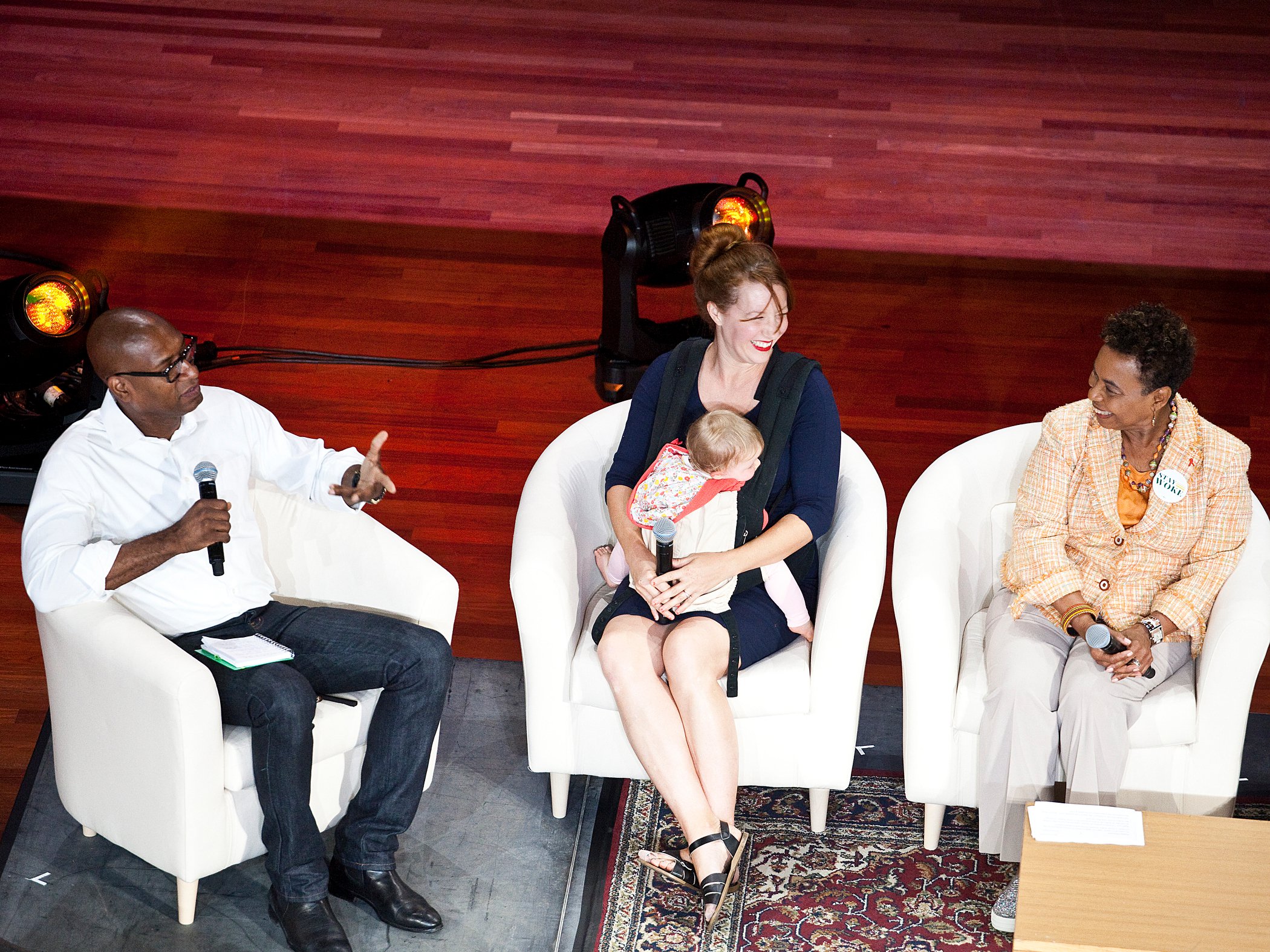 Emmanuel Macron founded French political party En Marche! just 18 months ago. It has since swept him to become the youngest French President in history. Lescure talked to us about the movement behind the man.

I realised that if I didn’t do something about it, nobody else was going to do it… [French President Emmanuel Macron] was a complete reinvention of traditional politics.

"If we don't get people on board then nothing will change," says @RolandLescure. "@EmmanuelMacron reinvented traditional politics." #GCMMpic.twitter.com/C3Dnrw1efq

Praeli is an American/Peruvian immigrant herself, and dedicates her life to protecting those like her. She insisted that all movements begin with just one person — and that person could be you.

You're either at the table or you’re on the menu… We get to define who we are, what we will be, and what generations that come next will follow.

"You're either at the table or on the menu," says @lorellapraeli at #GCMM. "We have to decide who we are." 👏 #GCWeekpic.twitter.com/Uo3YTdls6p

You’ll know Akinnagbe from TV show “The Wire”. But we know him as an activist and equality warrior. He argued for unity, and said that a movement is only as strong as the numbers it has on its side. 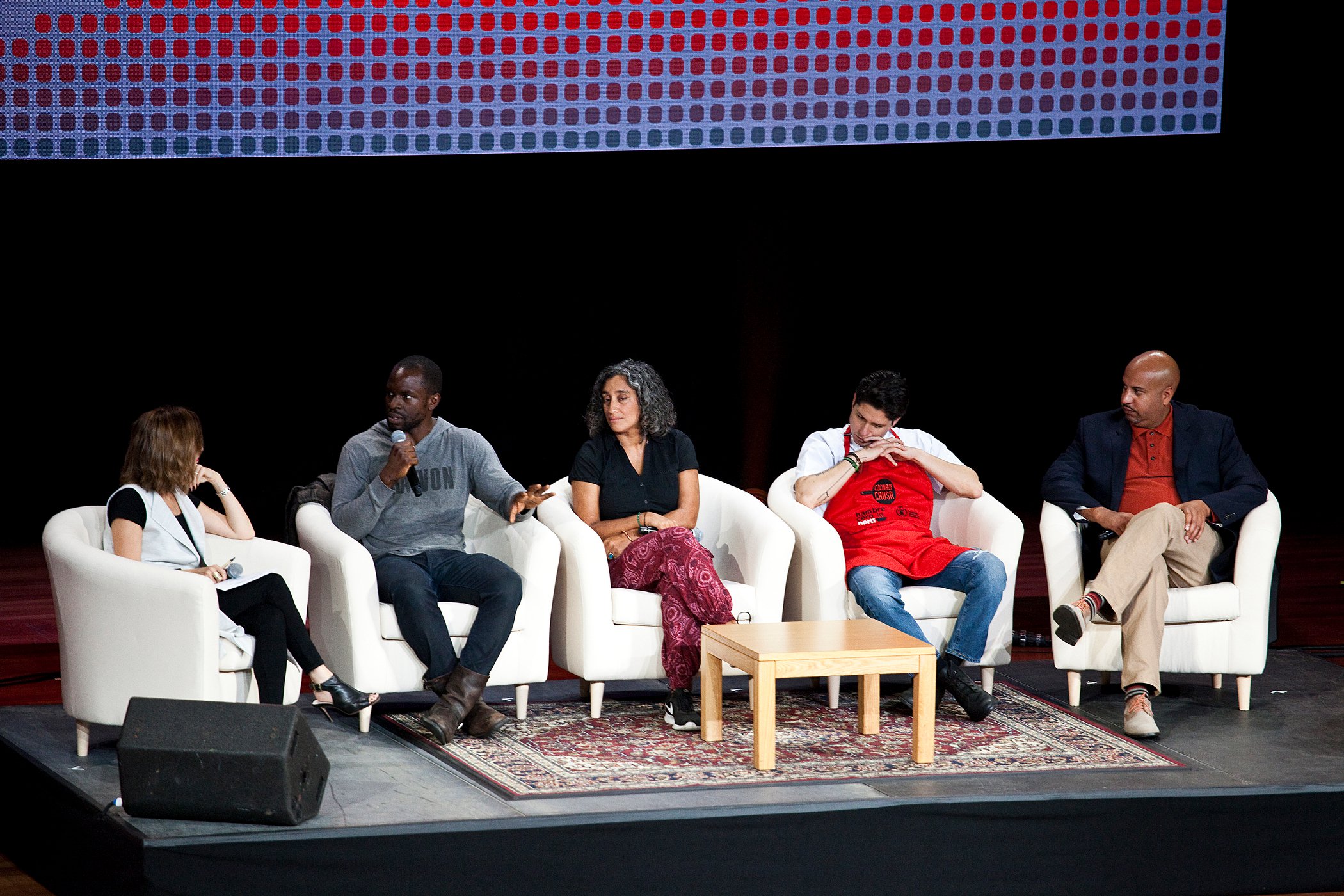 Jeff Radebe, Minister in the Presidency of South Africa

Radebe is South Africa's longest continuously serving cabinet member, and has been in every post-apartheid Presidential administration. He once led a 12 day hunger strike, but by his own admission, he’s not sure if he could lead one today! 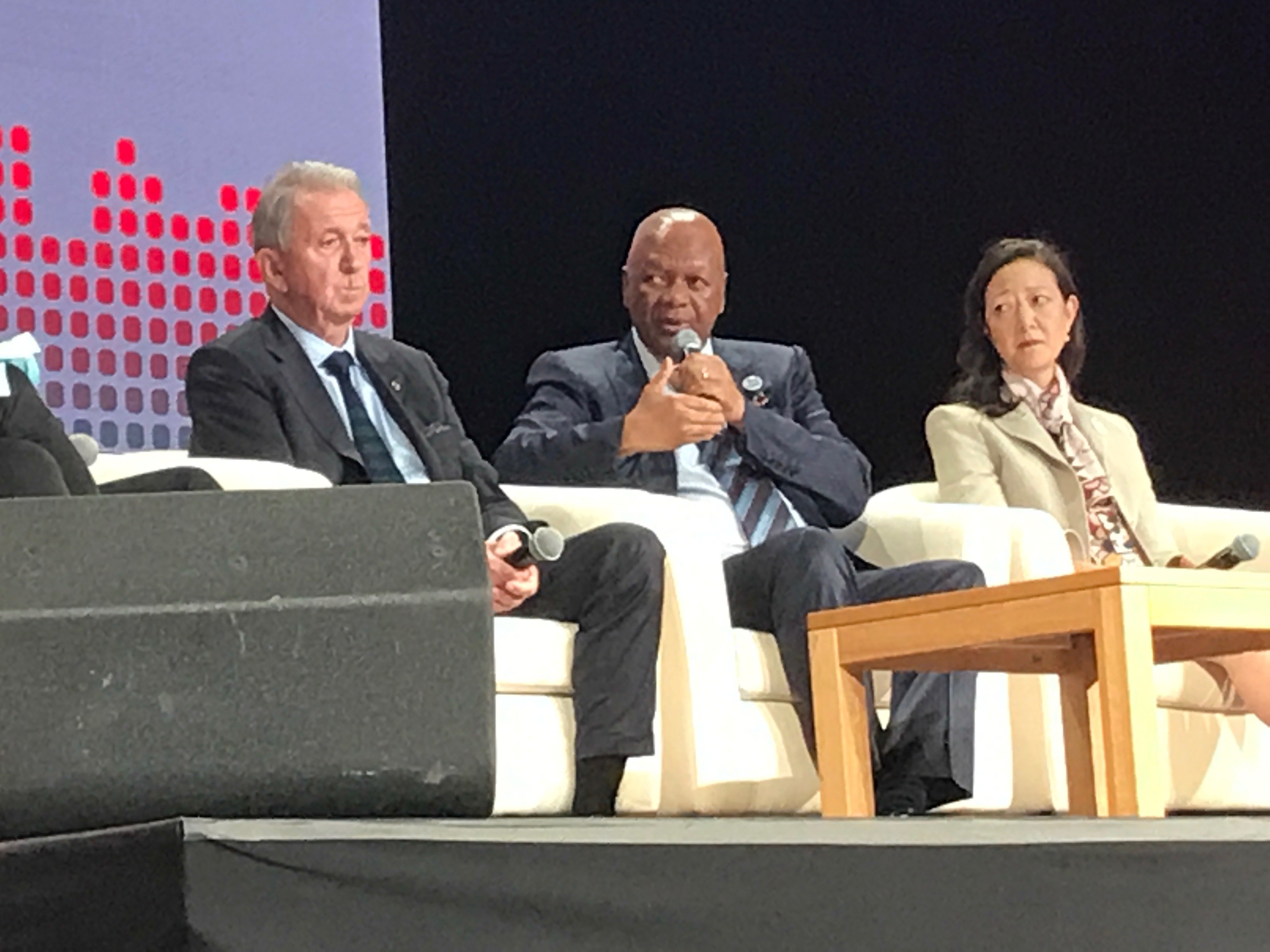 You can’t start a movement without half the planet. Dr. Phumzile Mlambo-Ngcuka didn’t have her notes to hand, but spoke from the heart. It was so real.

Girls are the most important resource for the future of humanity.

"Girls are the most important resource for the future of humanity," says @PhumzileUNWomen, Executive Director of @UN_Women 🙌🙌🙌 #GCMM#GCWeekpic.twitter.com/g4n2JAYsYo

Roper agrees with Dr. Phumzile Mlambo-Ngcuka. She works for the UK government, and acts as their voice on gender equality around the world. If you want to build a movement, you’ll need to get political — and the UK is officially on board.

Gender equality is absolutely fundamental to what we do.

"Gender equality is absolutely fundamental to what we do," says @JoannaRoperFCO, UK Special Envoy for Gender Equality. We agree! 👏 #GCMM ⭕️ pic.twitter.com/7XSE6nlHpD

I know what you’re thinking. Who’s Chamki? Well, she’s a detective, footballer, karate expert — and superstar puppet. Chamki is a character from India’s Sesame Street, and helps inspire young girls to be strong, educated, and confident.

This is how you build a role model. Meet Chamki - the puppet teaching Indian girls to be confident 💪 #GCMM#GCWeek@SesameWorkshop@srwestinpic.twitter.com/2QpuNq3DGW

Wilson, also known by his poetic moniker Lucifury, provided some fascinating insight into how white supremacist trolls behave online. He should know — he once pretended to be one. He also delivered the most 2017 line of the day.

I never thought I’d be on a panel talking about catfishing Nazis. 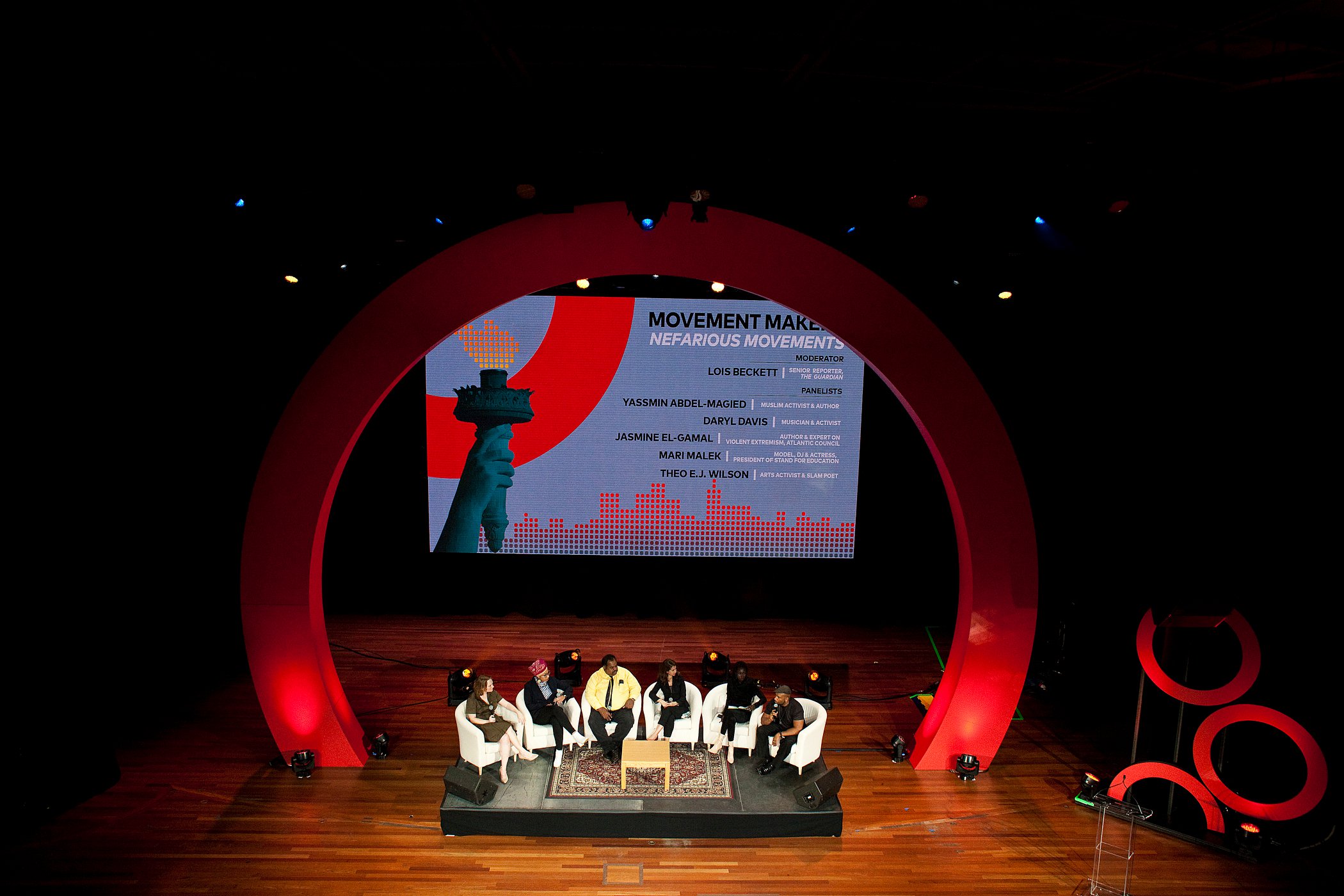 If you’ve got this far, you’ve done well! But Dominick summed up the day better than we ever could. Here’s his take on the best quotes from Global Citizen’s Movement Makers. It was a wild, inspirational ride.

Want to tweet the billion brilliant things that have been said today but @PeteDominick covers it all pretty well so 👇 #GCMM#GCWeek 🗽 pic.twitter.com/HbteuywER2

Thanks for having me! AMAZING group of people we had the privilege of hearing! https://t.co/Ek44SHeteI