“We must stand with every child who is uprooted by war, violence and poverty and climate change.”

On Thursday night at Global Citizen Festival Hamburg, Demi Lovato did not underestimate the two women she shared the stage with when she called them, “strong and inspiring.”

Lovato, 24, stood alongside Nadia Murad, 23, and Muzoon Almellehan, 19, asking for the world to seek justice for the wellbeing and mental health of refugees after inviting the two to join her onstage.

Muzoon Almellehan, known as “Syria’s Malala”, is the world’s youngest UNICEF Goodwill Ambassador. She spent three years in Jordan’s Zaatari refugee camp after fleeing violence in Syria. Since then Muzoon has advocated for the rights of fellow refugees around the world, especially for their education.

Murad is a former Yazidi sex slave who escaped ISIS and has been pleading for the International Criminal Court to investigate war crimes that she says ISIS continues to commit against the Yazidi people in the Sinjar mountain region of Iraq.

For years, Muzoon and Murad have been asking world leaders to support refugees. Along the way, they have garnered support from female powerhouses like Lovato and international human rights lawyer, Amal Clooney.

“I am proud to work with Muzoon and Nadia –– two determined refugees and survivors, championing important causes that will take steps to ensure the mental health and wellbeing for all refugees,” Lovato said.

For Nadia Murad, part of wellbeing for refugees includes protecting girls and women from sex slavery and finally having peace of mind that ISIS will be held responsible for their crimes against the Yazidi people.

Since fleeing Iraq in 2014, Murad has spent an exhausting three years begging the world to protect girls and women, some as young as six, she said onstage, from being captured and raped. 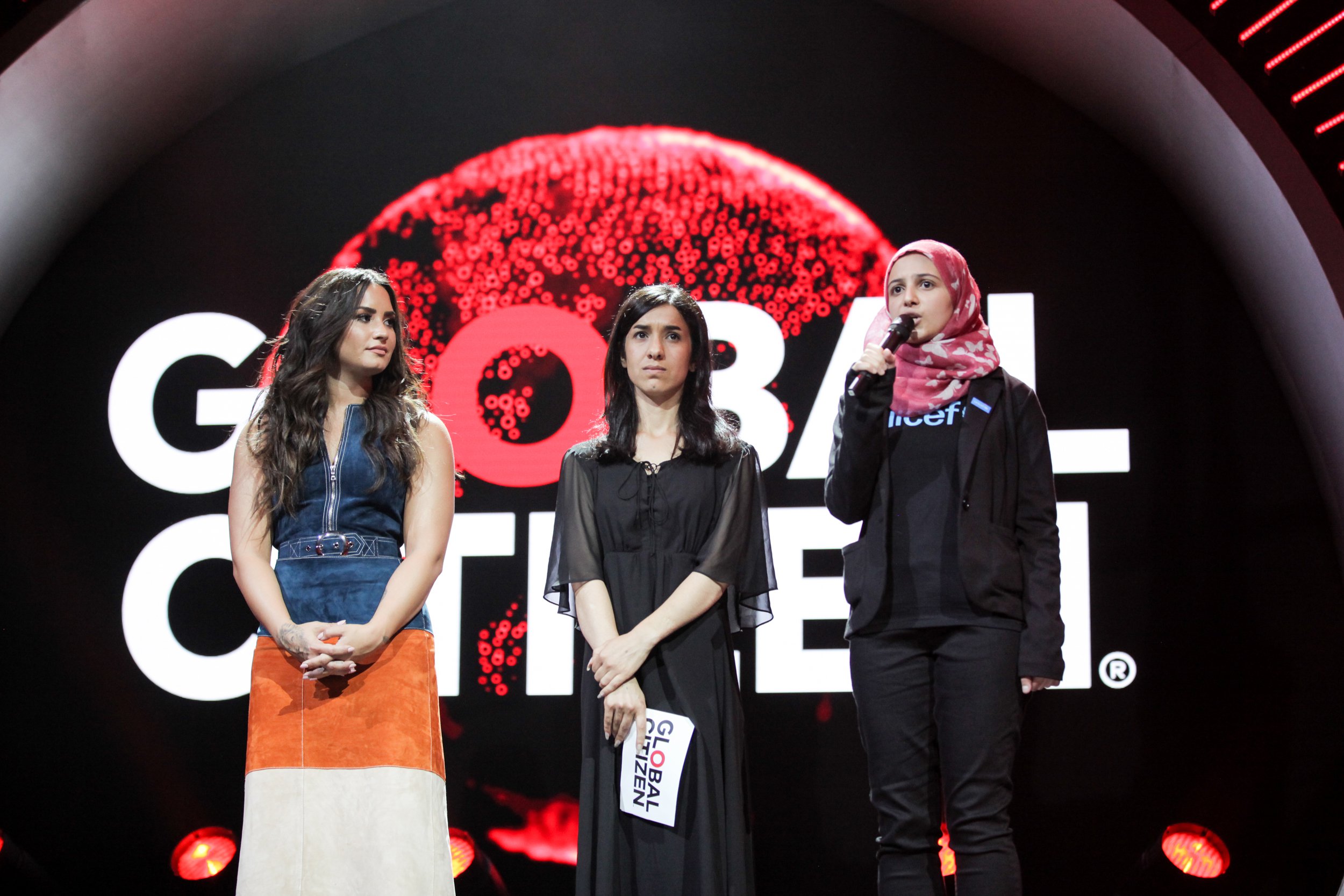 Tonight, Murad made a new plea.

Murad called on the current UN High Commissioner for Human Rights, Prince Zeid bin Ra’ad Zeid al-Hussein to set up commission of inquiry and collect evidence against ISIS for war crimes against the Yazidi people.

And onstage at Global Citizen Hamburg, Lovato and Muzoon joined thousands of Global Citizens to stand with Murad as she called on Prince Zeid to seek justice.

“We must stand with every child who is uprooted by war, violence and poverty and climate change,” Muzoon said.

And while Murad continues to ask for justice, Muzoon delivered the good news that 200,000 messages and actions from Global Citizens asking for education for those in emergencies has been heard.

Muzoon announced that the Australian government will be committing $10 million to the Education Cannot Wait fund, a global fund to provide quality education for the world’s 75 million children out of school due to conflict.