By Phineas Rueckert  and  James O'Hare 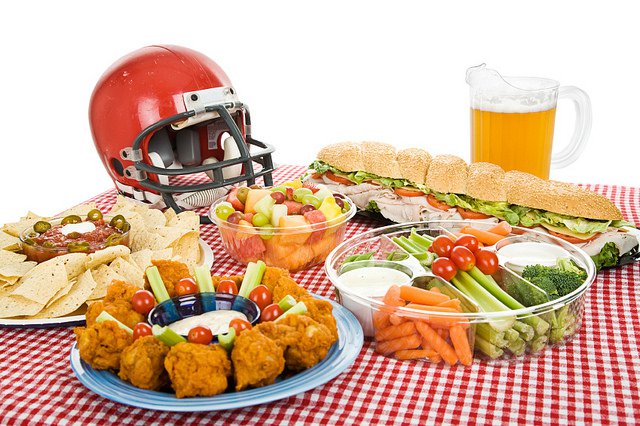 By Phineas Rueckert  and  James O'Hare

You do it every year. Clean up the living room, make (or order) food, throw drinks on ice, and hope you didn’t forget to invite your brother-in-law.

For many, Super Bowl Sunday might as well be a national holiday. With one third of the nation (well over 100 million) tuning in to watch the Big Game, it’s also a great time to celebrate Global Citizen values.

How do you make a Super Bowl party better? Throw one that puts special emphasis on being a Global Citizen while you stuff your face with vegan chili, cheer on players who take a stand, and watch Lady Gaga stand up for the rights of people everywhere during the halftime show.

We’ve put together a full guide on how you can throw the best Global Citizen Super Bowl party ever.

At the rate we’re going, it won’t be long before our oceans are equal parts plastic and fish, which will seriously ruin the party for pescatarians come Super Bowl 100.

Read more: 3 Ways to Avoid Having More Plastic Than Fish in the Ocean by 2050

Forget about plastic plates (and all styrofoam for that matter) and stuff your faces on dinnerware that won’t hurt the environment. Eco Party Time, for instance, offers a variety of tableware that is naturally compostable.

2. Make your own recipes.

Instead of buying brand name snacks and dealing with the package cleanup, make your own!

Homemade potato chips and tortilla chips are delicious and seriously easy to make.

Read more: It's Time for a Vegan Super Bowl

You can also save cardboard by making your own pizza (on the box, that is, not the ingredients), ditch the queso for this artichoke and spinach dip (mmm…), or prepare any one of these 20 vegan snacks. Love chili? Here's a vegan recipethat will knock your socks off.Remember, eating vegan is better for the environment.

3. Beer drinkers, do your part.

Beer advertisement are going to dominate breaks in the game. Before you commit to a brand for no other reason than they had the funniest commercial, keep in mind, Stella Artois has partnered with Water.org to promote clean water and sanitation around the world.

As part of their “Buy a lady a drink” campaign (because access to clean water disproportionately affects women), for every Stella banded chalice (beer glass) purchased, the brewery will donate $6.25 towards providing clean water.

Read more: How to Drink Beer Responsibly (for the Planet)

If you’re not into pilsners, you can still go green while enjoying a brewski. Opting for a keg (which is reusable) instead of cans or bottles that have to be recycled is another way to support sustainability.

For football fans in Canada, The Beer Store in Ontario takes back all the materials used in the production process — bottles, bottle caps, cans, boxes — and takes care of recycling them, so you don’t have to.

4. Chill with the chicken wings.

Before accepting a wing-eating challenge, and contributing to the 1.2 billion wings eaten nationwide in one night tally, make sure the chickens don’t come from factory farms. Instead, support brands that are certified humane, meeting ethical standards for how the animals are raised and slaughtered.

And while you’re defending decency in the poultry industry, support safe working conditions for the quarter million people who work to produce the 1 billion-plus wings people in this country will eat on Sunday.

Did we mention the nation eats an absurd 1.2 billion wings during the Super Bowl?

5. Support Players Who Make a Statement

This year the Super Bowl is coming during a highly charged political moment — each day, the Trump administration is making decisions that are highly unpopular with different parts of the electorate.

The issue which has gained the most headlines recently, however, is the suspension of letting any refugees into the country, as well as any immigrants from certain countries.

While professional athletes generally don’t comment on politics, this year seems to be different. A number of players and come forward to make statements on Trump’s recent actions. See which players (and owners) are saying what, so you know who to be rooting for.

Let’s be real — a lot of people who watch the Super Bowl have no idea which teams are even playing until they show up at the Super Bowl party. For them, this isn’t about how many shots were made or if the quarterback made the field goal (just kidding!). The Big Game for them is about which companies have the best TV commercials.

And often these ads are used by major brands to show that they’re more than just a beer, insurance company, or avocado producer. They use this very expensive air time to show that they support certain values, like gay rights, gender equality, or in the case of Budweiser, the story of immigration in America. Be on the lookout for the ads which support the values you share. And check out these ads from past years that Global Citizens will love.

The people who come for the Super Bowl for the ads are also most likely to stick around for the halftime show. This Game Day interlude has become one of the biggest entertainment events of the year in the US, with only the biggest music stars of the moment getting invited to perform.

Last year, we were treated to Chris Martin bringing his Global Citizen A-game (and t-shirt), as he performed along with fellow Global Citizen Beyoncé. This year, Lady Gaga, who’s embodied many Global Citizen values in her career, will be taking the stage.

8) Please, please, clean up after yourself.

Perhaps the most important thing you can do at your Super Bowl party is clean up after yourself. When the game is said and done, and your uncle has fallen asleep on the couch, take a few minutes to make sure to recycled what you can.

Americans are notoriously bad recyclers: only 54% of beer and soda cans, and a measly 34% of bottles end up in the recycling. This means that more likely than not, a large majority of the 49.3 million cases of beer purchased in the weeks before the game will end up in landfills, or throttling a school of Dories in the Pacific Ocean.

You can find local recycling information here, by simply inputting your zip code.

Because, despite how cool these Adidas shoes made from recycled ocean plastic are, you want to be part of the solution and not the problem.