In 35 years, what would you rather see in the ocean–plastic or porpoise? 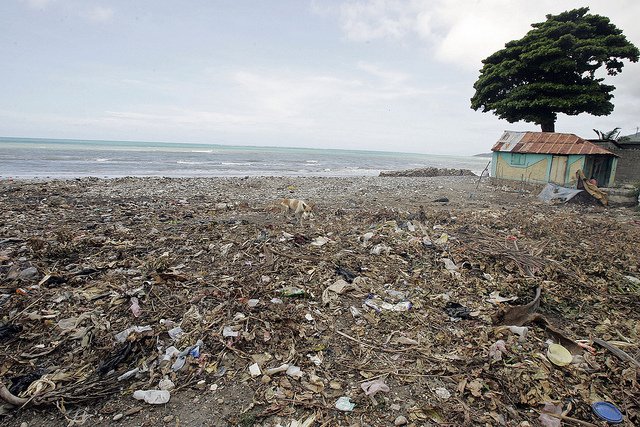 The other day I was making a smoothie to bring to work and the plastic cap for the blender fell into the mix. I still poured my blended breakfast into a to-go cup and went off on my way to work. After nearly cracking a tooth, I realized there were tiny plastic chunks in my smoothie and I was pissed. In this case, the only person I could be annoyed with was myself. But I did learn that eating plastic is awful--something that fish unintentionally do all the time. If current trends continue, there may not be much fish left at all.

Yes, the ocean had some victories this year with the ban on microbeads in beauty products. But a new report published by the Ethan McArthur Foundation, which came to light after being published by the World Economic Forum, predicts that plastic will out number the amount of fish in the ocean by 2050.

This is not good news for the oceans, humans, and basically all life on Earth.

It could mean no more sushi.

Your avocado toast game could be in trouble.

Even if you don’t like salmon, options will be limited.

But, really, communities and even entire countries rely on seafood as a critical source of nutrients and income. And this could be endangered. Because right now, 32 percent  of ALL plastic produced escapes collection and ends up in the ocean.

Like climate change, plastic in the oceans is completely man-made. But the effects of plastic are more easily seen, because, well, it's a tangible object.

“The planet is slowly being covered in plastic.” -Prof.Jan Zalasiewicz, Leicester Univ. https://t.co/yVFAHCLj5Vpic.twitter.com/ZEfoAtItkw

Except there’s one huge cluster of plastic that you cannot see: a giant “patch” of garbage the size of Texas in the Pacific Ocean. Why aren’t there pictures, and videos you can see of this trash island?

It’s because the Great Pacific Garbage Patch (along with four others known to humans) is made up of tiny bits of microtrash. And it’s not as easy as you think to clean it up. The garbage in the patch is so tiny that it would be like cleaning pepper out of a bowl of soup.

Much of the trash in the ocean comes from production of other plastic packaging and building plastic products. Such as polypropylene pellets or plastic punched out when making other products and is too small to go through recycling collection therefore ending up in oceans.

Old but worth a share. Art can be a catalyst to conversation and change! https://t.co/s9dnDJVfsW#plasticpollutionpic.twitter.com/2Ugqm5zhbk

However, there are solutions!

The report had a great proposal on how to put a stop to the 9 million tons of plastic which makes its way into the ocean each year.

1) Put the responsibility back on companies.

Plastic production increased from 15 million tons in 1964 to 311 million tons in 2014. Only 10 percent of plastic comes from recycled materials, the rest is produced from virgin fossil fuels. Pressure must be put on production companies, and it’s up to citizens to force world leaders and governments to make this happen now.

Governments should take steps to regulate plastic production, and put in place measures enforcing production companies to do a better job at reusing plastic.

Reducing plastic consumption helps, but plastic production is the real problem that needs to be stopped.

2) Create an economy for sustainable packaging

Sharing technology advancements for sustainable packaging can help companies afford to transition from plastic packaging to super cool compostable mushroom containers like this one.

.@core77 you can learn more about Myco Board and our other products at https://t.co/JEJONTVIaypic.twitter.com/LNcj6GqCzH

There's no reason why sustainble packaging can't become the norm. Think abou all the plastic you use every day, especially all the plastic food packaging. Now imagine if all that plastic was a sustainable material. Even on an individual level, that's a huge difference.

This is where the world needs to consider the fact that one-third of plastic ends up in the ocean. Is there a way to capture microtrash before it nears oceans? The report suggests focusing on high-leakage areas, especially coastlines. If coastlines are equipped with better facilities and collection methods, then far less plastic will enter the ocean.

It’s time for a slap in the face (see GIF below for intended pun) when it comes to reducing plastic production. Plastic use increased by 20 times in the past fifty years. So let’s see less plastic produced in the next thirty-five, and maybe someday no plastic at all.

And in the meantime we can all learn from this woman.