Mumbai is home to the first-ever Global Citizen India Festival. 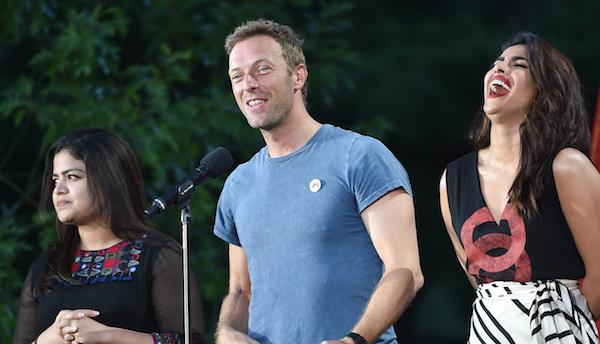 When 80,000 young people from across India arrived in Mumbai for the Global Citizen India Festival on Saturday, local leaders in the city and the state of Maharashtra not only welcomed them, but joined in their quest to bring about real change to India and the world.

Leaders from the local, state, and federal government joined together on stage at the festival as well as in video appearances and messages to the Global Citizens watching around the world to commit to creating a cleaner, healthier, and more sanitary India with better educational opportunities, increased access to technology, and more robust healthcare for India’s 1.2 billion citizens.

The commitments will mean major changes and improvements for millions of residents of Mumbai and the state of Maharashtra.

By the end of 2019, all Maharashtra citizens will have safe access to water and sanitation, the chief minister said on Saturday.

All of the girls and women of Mumbai will be provided with safe menstrual hygiene by the end of 2019, according to a commitment made by Poonam Mahajan, an MP representing the city.

Viacom, one of the partners of the Global Citizen India Festival, committed to installing sanitation facilities at 77 open defecation spots in Mumbai by the end of 2019.

Open defecation is a major problem throughout India, and a target of Prime Minister Narendra Modi’s Swachh Bharat or “Clean India” campaign. While many people in Mumbai have access to toilets, there is still need for increased facilities and behavioral change, encouraging citizens to use toilets instead of continuing the practice of open defecation.

Viacom said it would also deliver a behavioral change communications campaign to amplify Swachh Bharat that would reach 500 million Indians by the end of 2019.

The children of Maharashtra will benefit from the commitments of the CGI Festival, too.

ConnectEd Technologies committed to bringing smart classrooms to 25,000 more students by the end of next year, and Brihanmumbai Municipal Corporation said it would provide digital education through tablet computers to 350 government schools and 30,000 students.

Schools will also receive better toilets: Yuva Unstoppable announced that it had secured corporate support to increase access to better hygiene and sanitation in schools for 400,000 students by the end of next year.

The commitments made at the Global Citizen India Festival are only the beginning: over the course of the next year to three years, thousands of Global Citizens in India will call on leaders to follow through on their commitments and remain accountable.

The leaders of Mumbai and Maharashtra took an incredible step in partnering with this new youth movement to help make India clean and safe for all citizens. Now it’s time for them to take action.