“He gave me hope at one of my lowest points and he's stood by me all the way.”

Jahed Choudhury’s wedding at a simple registry office in Walsall, England, wasn’t the biggest or flashiest of the year, but it was a landmark ceremony for the country for another reason.

Choudhury’s wedding is believed to be the first same-sex Muslim wedding in the United Kingdom, according to the Independent.

Choudhury, 24, and his partner of two years, Sean Rogan, 19, both wore gold Sherwanis, traditional Bangladeshi Muslim attire, and garlands of red, gold, and green flowers as they exchanged vows with one another over the weekend.

Read More: The Day After the Mosque Burns

And the story behind how the pair met is just as moving as their trip to the altar.

Both Choudhury and Rogan struggled with telling their families that they were gay.

But for Choudhury, one among the minority group of openly-gay Muslim men in the UK, his family’s inability to accept his sexual orientation stemmed from both societal and cultural taboos. 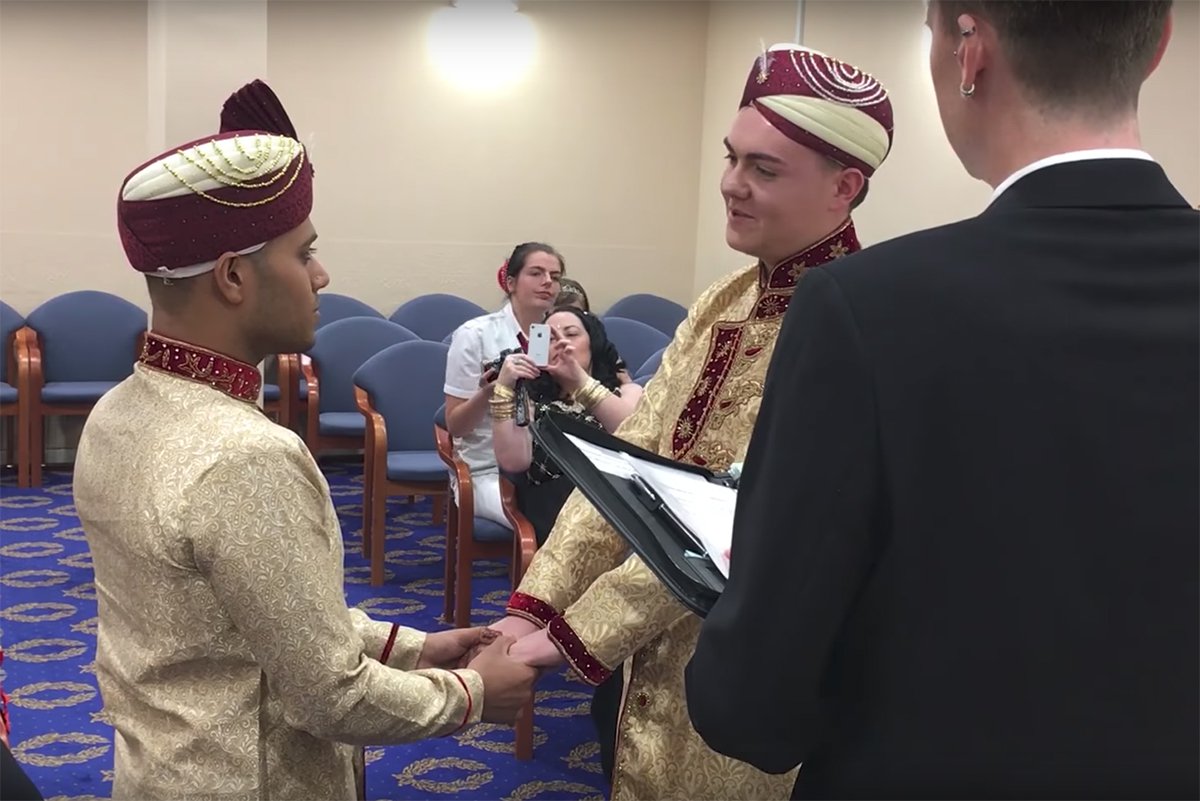 
Sadly, over half (61%) of Muslims in Britain think that homosexuality should be illegal, according to a 2016 survey from Channel 4, a media station in the UK. Nearly half (47%) also think that gay men should not be allowed to be teachers, compared to 14% of non-Muslim Brits who were surveyed.

“My family... think it's a disease and can be cured, some of my family still call it a phase,” Choudhury told the Telegraph.

Choudhury told the Express and Star that his family is Bangladeshi and that he always felt like a “black sheep” in his family for not enjoying activities like soccer.

Choudhury was also rejected by his mosque after attending for 15 years and bullied by other boys in his community after coming out, he told the Telegraph.

“It went all over school, people would spit on me, empty the rubbish bins on me, call me pig and the Muslim people would shout 'harum' - which is a very nasty insult in my language," he said.

He said that he was sent on a religious pilgrimage to Saudi Arabia and Bangladesh, tried having a girlfriend, taking medication, and even changing friend groups before he attempted to take his own life.

"I'd not long overdosed and I was crying on a bench and Sean came over and asked if I was okay,” Choudhury said. “He gave me hope at one of my lowest points and he's stood by me all the way.”

However, despite their challenges, the couple told Express and Star that they hope their wedding will inspire both Muslim and LGBT communities to be open about their identity.

"I want to say to all people going through the same thing that's it's okay - we're going to show the whole world that you can be gay and Muslim,” Choudhury said.