It is possible to be gay, Muslim and proud.

For Fahad Saeed, the news that a man claiming allegiance to ISIS had killed over 50 people in a gay nightclub in Orlando came as a double shock. Both gay and Muslim, the news of the attack struck two sides of his identity.

“As a gay man, I feared how the world would perceive this news. Would it matter that it was a gay club? Would they ridicule this incident?” he says. “On the other hand, I feared what I fear when I read about a presumed terrorist attack.” As the news trickled in that the attacker identified as Muslim, his worries deepened. “I was expecting a very polarised debate.”

This is the fractured reality of life as an LGBTQ Muslim -  often forced to contend with a combination of homophobia, transphobia, and Islamophobia. Not only this, the struggle to embrace both their sexuality and their faith leaves many caught between two worlds. Must you sacrifice your sexuality to stay connected to your beliefs or culture? Does choosing to come out mean you must abandon your roots?

Fahad’s story is proof that you can be gay, Muslim and proud.

“I grew up in Denmark in a typical Pakistani family,” he says. “Religion played a big part in my upbringing. I had to explain what my home was like to my Danish friends, why I could and couldn’t do certain things - like not eating Pork, celebrating Ramadan.”

His upbringing was strict, and growing up, he felt he couldn’t be honest with his parents when he realised he was gay.

“All through my upbringing, I had to hide who my friends were, what my interests were,” Fahad explains. “Being gay was just one of those things that I couldn’t share with my parents.”

His parents eventually discovered Fahad’s sexuality when his father found out he had been going to gay clubs. Although he tried to convince his son to simply “stop being gay,” Fahad admits, “We both sort of knew that wasn’t possible.”

Since then, his parents have gradually come to accept their son’s identity.

“It took them a long time to get to where they are now. I wouldn’t say things are perfect, but I would say we have a good relationship. My dad wants to meet my boyfriend.”

Fahad went on to co-fouond an organisation called Sabaah, which works to empower people from ethnic minority backgrounds who identify as LGBTQ. Meaning “new day” or “new beginning,” Sabaah helps create a safe community for people to overcome the challenges associated with their sexual orientation, ethnicity or gender identity. 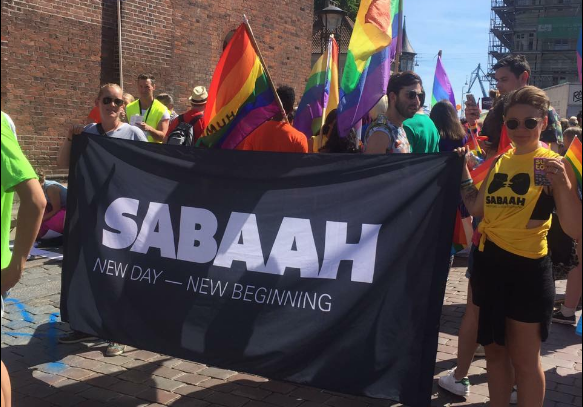 It’s this network that has deepened Fahad’s own understanding of his identity. “I’ve met some really wonderful people who can elaborate on the complexity of our identity. It’s through this community that I learned there is no direct mention or condemnation of being gay, bisexual, transgender or intersex in the Koranic texts - it’s all people’s interpretations.”

Fahad’s story is an example of courage and hope in a world where Muslims and members of the LGBT community face violence and marginalisation on a daily basis. Authorities in Istanbul have recently banned transgender and gay pride marches in the city due to security fears and threats from extremists, whilst increasing attacks on mosques point to the violent consequences of islamophobia.

But in the aftermath of Orlando, voices promoting peace and tolerance are piercing through fear and prejudice, as people like Fahad stand up to call for unity.

“You cannot hate Muslims and love LGBT people," he said at a vigil from the Orlando victims outside the US embassy in Copenhagen. “You cannot love Muslims and hate LGBT people. As minorities, we can’t really be fighting each other. We must let love triumph over fear.”